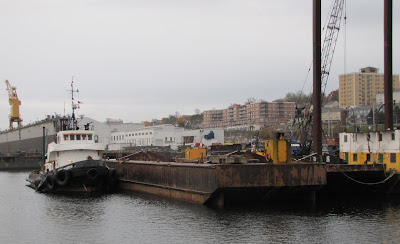 The veteran tug Swellmaster made a brief visit earlier this week, when she arrived with the dump scow HD 6. They tied up at Harbour Development's berth a pier 7. She arrived either late October 29 or early October 30 (photo), but sailed again, light tug, Wednesday, November 3 bound for Montreal. She will pick up the dredge D.6 that has been laid up there and return to Halifax.
Since last seen the tug has acquired orange paint on her wheelhouse visor. This brings her into line with tugs of the parent company Atlantic Towing.
Built in 1965 as Atherfield the tug was acquired by Atlantic Towing in 1971 and renamed Irving Hemlock. She took her present name in 1996. A twin screw tug, she is rated at 2,040 bhp (on replacement Cat engines installed in 1987.)
.
Posted by Mac at 9:22 PM