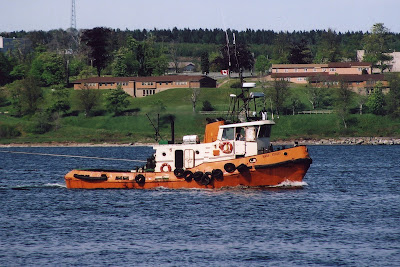 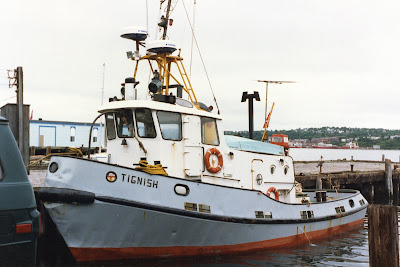 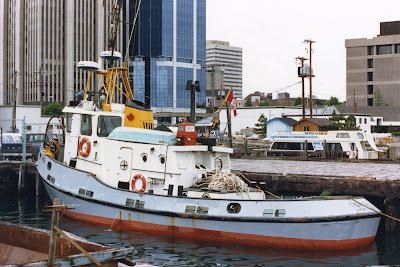 4. Wearing the colours of DPW, she shows very nice lines. 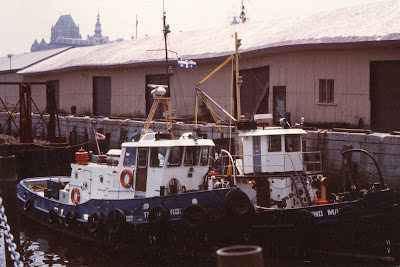 As promised, more on Superport Marine Service's Mary Steele.
Built at Lauzon, QC in 1972, iut was not built by one of the Davie yards, but by Eddy and Laetare Bargone. Of 51 gross tons, the tug was powered by a 365 bhp engine driving a single screw. The tug was built for Techno-Maritime Ltée and named Jacques Rochette. Techno owned several tugs, research vessels and barges, and in 1975, the tug was brought into line with other vessels in the fleet and renamed Techno-Rochette.
Techno went out of business and the tug was sold to the Canadian Department of Public Works and renamed Tignish in 1981. As the name implies the tug was stationed in Prince Edward Island, but did get around the rest of the maritimes towing dredging plant.
When DPW got out of dredging work Superport picked up the tug in 1996 and gave it the name Mary Steele. In Superport service it has been repowered with a 450 bhp Cat engine, but looks remarkably similar to its original self. I do note that watertight doors were added to the wheelhouse by DPW.
The tug has towed barges all along the Atlantic coast as far as Saint John, NB, and presumably to various points in Cape Breton and the Gulf of St.Lawrence.
Update: Mary Steele is reported to be in Saint John, NB on November 17. She was in Port Hawksbury November 12.
.
Posted by Mac at 9:27 PM