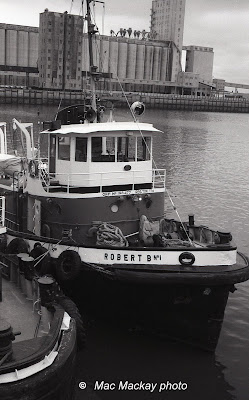 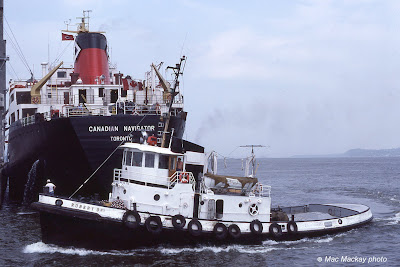 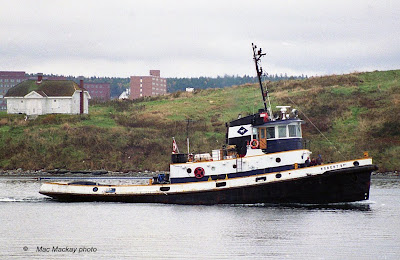 Built in 1956 by Davie Shipbuilding in Lauzon, QC, it was built to the yard's own account. The shipyard was owned by Canada Steamship Lines at the time, and it provided tug service in Quebec City, and had the tugs available for salvage work and ship handling. It was named for Robert Black, a member of the management team at the yard. (The No.1 came from the fact that there was another Robert B. (a Vancouver tug) and a Robert B. II (owned in Port aux Basques, NL.)
CSL divested itself of the shipyard, and the tug fleet, so ownership changed to Quebec Tugs. It lost its beautiful paint job and became black and white. As Groupe Océan formed itself, the tug was sold to McKeil Workboats of Hamilton, ON and in 1997 became Jarrett McKeil. They found lots of work for it, towing old lakers, and barges, and it even reached Halifax in 1994 towing container crane components from Sorel to Massport in Boston.
Like fleet mate Wyatt McKeil ex Otis Wack it is a single screw, 1200 bhp GM powered tug, and a member of a now endangered species. It was sold to Heddle Marine a number of years ago and has been laid up for some time, awaiting the inevitable torch.
.
Posted by Mac at 8:01 PM