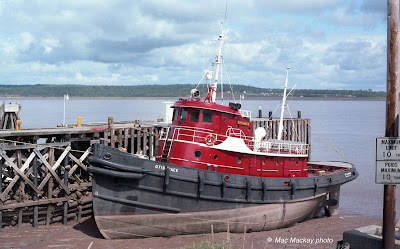 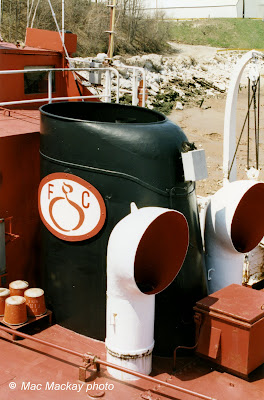 
Built in 1950 at Davie Shipbuilding & Repair Co Ltd in Lauzon, QC, to a design by Robert W. Morrell of New York, the tug was built especially for service at Hantsport, NS. When not working it tied up at a little pier next to the government wharf and dried out at low tide each day. Its hull was designed to take this constant stress, and to deal with a bit of ice from time to time too.
Most unusual for a Canadian tug of the era (they were invariably powered by Fairbanks-Morse) it was powered by a V-12 GM- the American standard. It developed 1200 bhp, on a single screw, which was enough for the small bulk carriers that loaded gypsum at Hantsport, and the other small freighters that docked at Hanstport, Windsor, and several other nearby ports. I have no record of it assisting shipping in Port Williams, Wolfville, Parrsboro or Walton, but it may well have done so.
It was not the first tug named Otis Wack - that was a wooden tug built in 1921 in Port Greville. The tugs were named for Otis Wack, an American citizen and long time manager of the Fundy Gypsum operations, which were owned by U.S. Gypsum.
In 1995 Fundy Gypsum needed a more powerful tug (they bought Spanish Mist - since sold to the Magdalen Islands.) McKeil Workboats of Hamilton bought Otis Wack. It carried the original name until 1997 when it was renamed Wyatt McKeil and worked around the Lakes and down the St.Lawrence. Being largely in fresh water would have ensured a long life for the tug if there had been work, but a single screw, low power tug is not much in demand these days.
Ownership was transferred to Heddle Marine, also of Hamilton, and the tug is now to be broken up there.
For more on gypsum operations at Hantsport see:http://shipfax.blogspot.com/2011/11/usg-pulls-plug.html
.
Posted by Mac at 7:26 PM