When Groupe Ocean acquired the two Sept Iles based tugs Pointe aux Basques and Pointe Sept-Iles from Switzer last year, it was apparently their intention to re-deploy them after refit. Now that Pointe Sept-Iles has been renamed Ocean Sept-Iles it has now been refitted at Ocean Industries shipyard at Ile-aux-Coudres and was reported downbound on the St.Lawrence in mid-March. 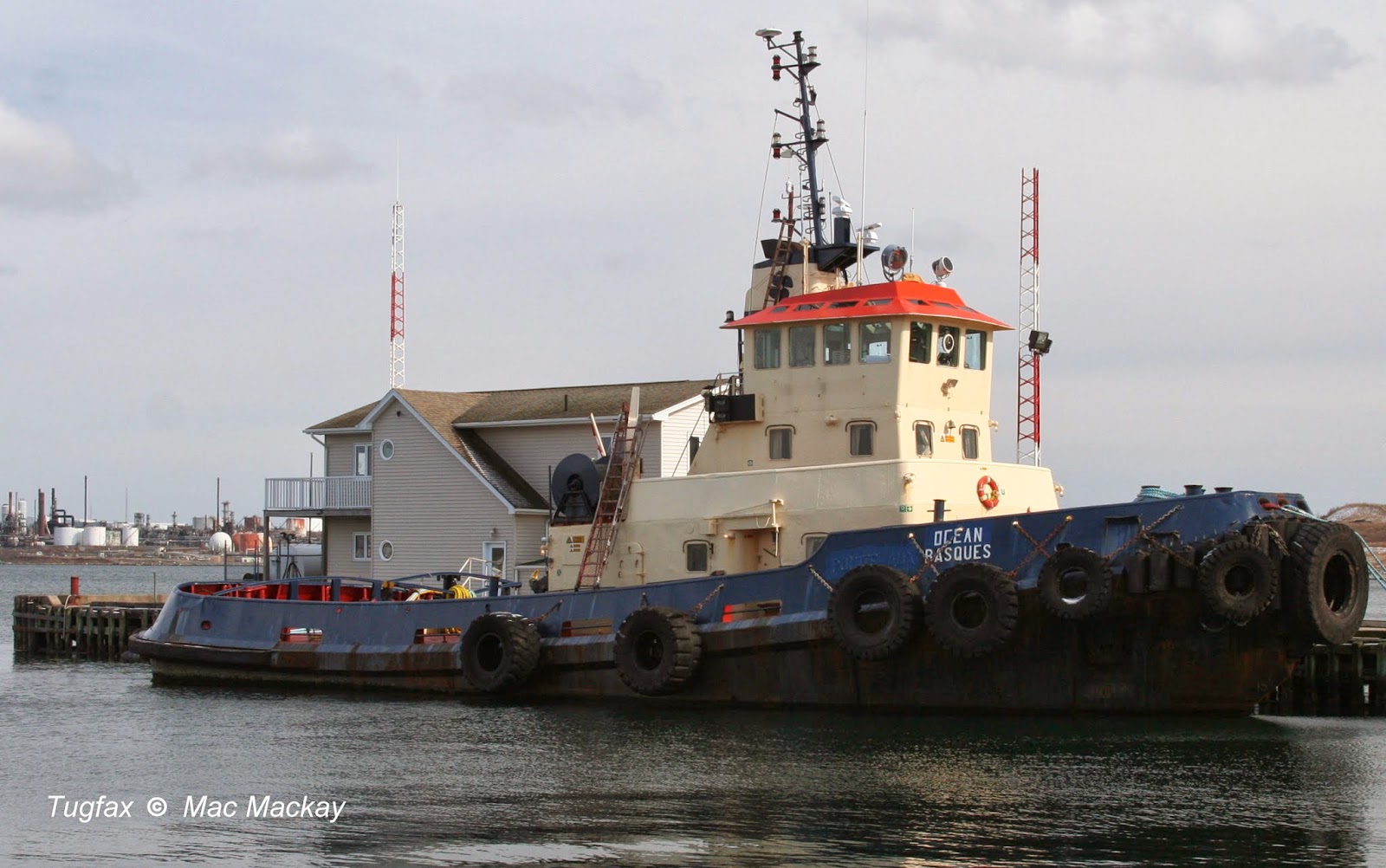 I hear that Ocean Basques, the former Pointe aux Basques, will also be refitted at Ile-aux-Coudres this spring, but as of today it is still laid up idle in Halifax.

Originally ordered by Foundation Maritime, to serve the Iron Ore Company of Canada (IOC) in Sept-Iles, two powerful icebreaking tugs were under construction in Collingwood when Foundation sold out to MIL Tug and then to Smit-Cory.
The boats were delivered in 1972 as Pointe aux Basques and in 1973 as Pointe Marguerite. for the newly formed Eastern Canada Towing Ltd (ECTUG), a joint venture of the Dutch Smit and the English Cory tug companies.

Pointe aux Basques in Halifax in 1987, in Smit-Cory colours. The tug office at the end of the pier was rebuilt after Hurricane Juan in 2003.

Pointe Marguerite in Halifax in 1977.

Identical 4200 bhp twin screw tugs, they proved very capable in winter ice, and were often sent out to assist shipping in trouble in the Gulf, and even made tows all the way to Halifax. They also came here for refits and drydocking at the Dartmouth slips.

Regrettably Pointe Marguerite had only a brief career with Ectug, for on November 14, 1978 while assisting Algobay in Sept-Iles Bay, it was crushed against the large bulker Cielo Bianco  (51,579 grt / 88,785 dwt) and sank, taking two crew members with it. The tug was so badly damaged that no attempt was made to raise it, and its wreckage remains in Sept-Iles Bay.

Ectug immediately ordered a near sister ship from Collingwood, which was delivered in 1980 as Pointe Sept-Iles. There are slight exterior differences, and the interior layout is also different.

When Smit and Cory parted ways, ECTUG assumed a new funnel mark under Cory ownership,  but retained a similar livery until the short lived merger with Bureau Wijsmuller saw a major repainting. When Svitzer took over the tugs were repainted again and carried that scheme until sold to Groupe Ocean. Although I have not seen her, Ocean Sept-Iles has now been repainted in the distinctive Groupe Ocean colours.