The tug Jane Ann IV has now been offered for scrap sale on Facebook according to reports. The veteran tug had been laid up since 2009 until this summer when its barge coupler system was removed and then it was towed from Toledo, OH to Calcite, MI where it was hauled out on a beach.

Once based in Halifax as Secunda Marine's Tignish Sea, the tug was built in 1978 by Mitsui Engineering + Shipbuilding in Japan. As Ouro Fino until 1981 then Bonace until 1992, it was laid up in Brazil when Secunda found it. As Tignish Sea it arrived in Halifax May 9, 1993 towing sister tug Cavendish Sea. It went to work doing offshore supply and towing work until 2000. Included in that were several notable salvage jobs, including the Amphion featured here before. 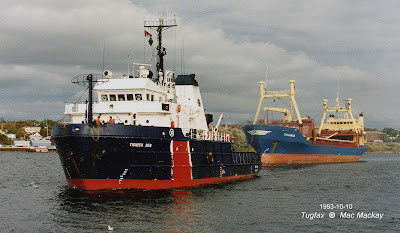 Towing disabled Talisman in to Halifax. 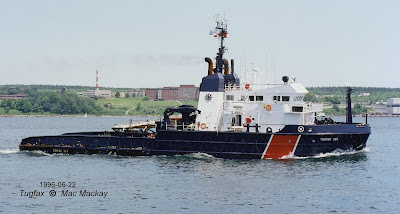 The tug had a rendency to dip its bow, and was reported to be very uncomfortable at sea.

Great Lakes Transportation (GLT) of Halifax then acquired the tug and installed a coupler system  allowing the tug to push the barge Sarah Spencer. The barge, started life as the laker Adam E. Cornelius in 1959. It was modified by removal of its engines at Halifax Shipyard in 1989. A large notch was installed in the stern and several different tugs were used to push the barge in coastal trade and on the Lakes. Those tugs used face wires, but GLT installed the ladders needed for the coupler system. 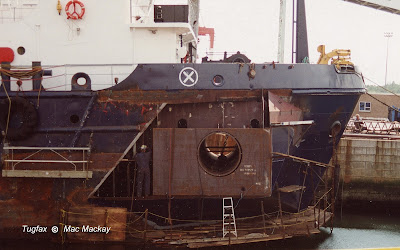 A large section of the accommodaiton was removed to install the coupler ram tunnel. 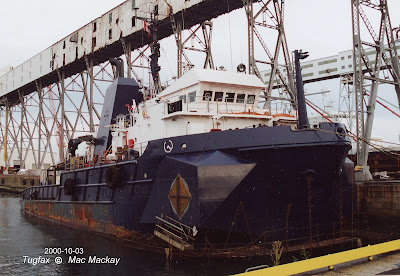 The hull was fared out to the width of the barge notch. 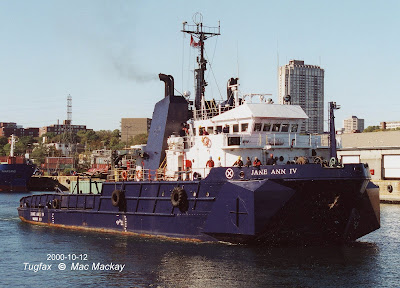 The actual coupler installation was not done in Halifax. The tug sailed from Halifax in October 2000 with plates over the coupler openings. The rams were installed on the Great Lakes.

Once GLT began running the pair as an integrated tug and barge it remained on the Great Lakes and Seaway until 2006 when it had a major refit. New owners were then listed as TGL Holdings of Plymouth, MI and Toronto, ON, but both tug and barge retained Canadian registry and management. However they finally laid up in Detroit in 2009, never to sail commercially again. Jane Ann IV sank at least once (in 2013) and perhaps once again until it was sold earlier this year. The new owners removed the coupler system for potential re-use in another tug and plated over the hull opening. 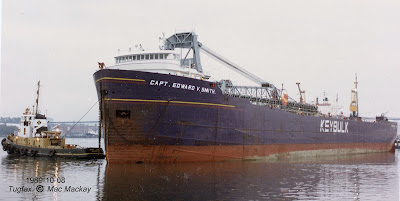 Sarah Spencer as it was intially converted to a barge. The tug was conned from the barge's wheelhouse. It also carried the name Sea Barge One before it was acquired by GLT. 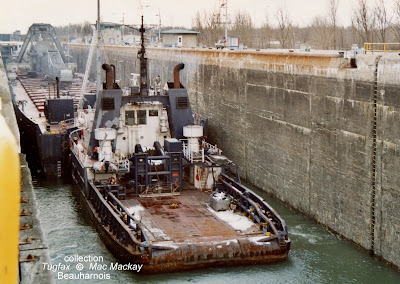 Even with a fully loaded barge, the tug had no visibility forward.

The tug's Canadian registration was closed August 24, 2018 shortly after its arrival in Calcite, MI.