Some say there are two seasons in the Atlantic Canada - snow plowing season and paving season. The latter traditionally ends in late November when freezing temperatures make it difficult for asphalt to cure properly. So at this time of year there is usually a mad last minute rush to get all the planned work done.

Asphalt is a tricky commodity to handle as it must be kept heated at all times, and so it can only be carried in specialized tankers. There are never enough Canadian tankers (whether they be ships or barges) to meet the seasonal demand, and the region's major asphalt product Irving Oil, acquires a coasting license for the US flag tug barge combo Coho / Penn No.92 to operate between Canadian ports when the Canadian fleet is too busy. (This is the fourth coasting license trip the tug has made this year. Much of the rest of the time it is running from Saint John, NB to US ports.)

Coho and Penn No.92 arrived in Halifax today from Saint John, NB, carrying 80,000 bbls of hot asphalt (at 300 degrees Fahrenheit), some of which it will discharge at the McAsphalt depot in Eastern Passage. It will continue on with cargo for some or all of the ports of Stephenville, Holyrood, Come-by-Chance and Botwood, NL. 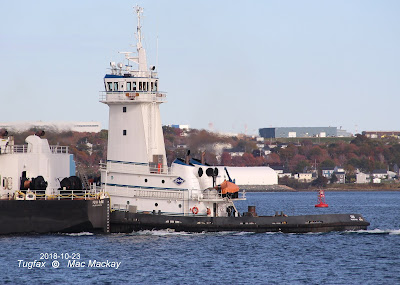 Built in 2008 by Thoma-Sea Boatbuilders of Lockport, LA, Coho is a Fin class ATB tug, with a 53 foot height of eye elevated wheelhouse. It is powered by a pair of Cummins engines giving 4,000 bhp through twin screws in nozzles and Nautican triple shutter rudders. It relies on a JAK-400 coupler system to connect with the 90,0000 bbl, 414 foot long barge, and stays in the notch in virtually any sea condition. It thus does not carry a towing winch, but has a capstan and H -bitts if required to tow the barge. 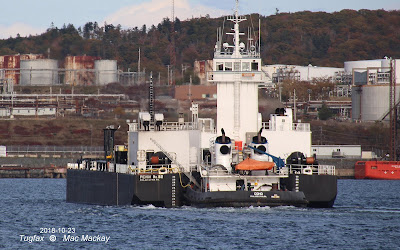 The tug was ordered by Penn Maritime of Philadelphia, and called here in their grey and black livery. In 2012 Kirby Corp acquired Penn and repainted the superstructure white, and applied the Kirby diamond to the stacks.

I have featured the tug here before where I posted some photos of the tug out of the notch.: