On March 5 the former navy fireboat Firebird was registered for the first time as a civilian vessel.
Ordered in 1974 and delivered in 1978 by Vancouver Shipyards Co Ltd in North Vancouver, BC, it was one of two fireboats built for the Minister of National Defence. The sister tug, Firebrand was assigned to the nearby Esquimalt naval base, but Firebird had farther to travel. It was brought to Halifax in August 1978 via the Panama Canal, nestled on a bed of gravel in a barge towed by the tug Ocean Crown. The tug and barges were being delivered to new owners in Quebec, and the fireboat was able to hitch a ride.

Still perched in its gravel nest, Firebird waits to be unloaded at Dartmouth Marine Slips Long Wharf. The RCN tug CNAV St.Charles is also in for a refit.

Assigned to the Queen's Harbour Master and classed as an auxiliary vessel, employing a civilian crew, the Firebird worked out of HMC Dockyard in patrol and firefighting duties. It was initially assigned pennant number YTR 562 (Yard Tug Rescue), but later re-categorized as YTB 561 (Yard Fire Boat) since it was rarely used as a tug. Its bollard pull rating of 7.5 tonnes was not in demand when the Dockyard had six other harbour tugs available.

Firebrd is powered by two 365 bhp Cats for propulsion through a pair of z-drives. Another duo of 365 bhp Cats drive the fire pumps and could deliver 5,000 igpm at 150 psi while the boat still moves independently. Three 3 inch monitors of 1250 igpm were the main firefighting tools, but it also had several deck connections and carried 500 gallons of AFFF (foam). In a fire emergency its crew was supplemented by Dockyard firefighters. 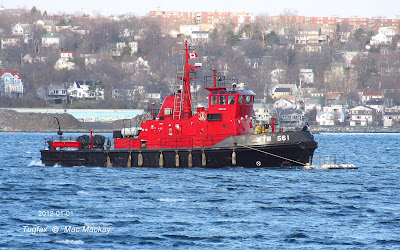 Firebird was called out on New Year's Day to retrieve an errant target float.
Regular Dockyard tugs were apparently on holiday schedule.

In 2017 the Firebird was declared surplus and sold to R.C. Ballott of Springdale, NL. The boat was moved to Eastern Passage where refitting work has been going on, particularly in the past few months.
Although it is not clear what use will be made of the boat.

Sealand Shipping Services and Sealand Diesel Services Ltd of Springdale NL have made good use of the tug  R.J.Ballott (ex Jerry Newberry-13, Kay Cole -95, Point Victor -77, Foundation Victor-73) built in 1956 and still going strong, so they no doubt have good plans for the Firebird. 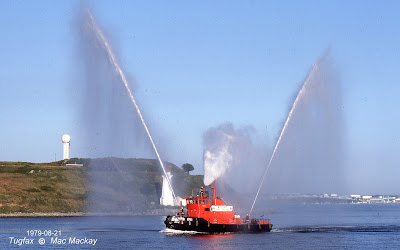 Rarely used to fight an actual fire, Firebird did from time to time put on a show.