A big offshore construction vessel that spent some time in Nova Scotia has been sold and renamed.

Toisa Pegasus, 9494 gt, 7800 dwt, was built in 2009 by De Merwede in Hardinxveld, Netherlands for Toisa Ltd of Piraeus, Greece. Through a complex chain of intertwined companies, it was managed by Sealion Shipping  of London. Toisa was a largish company with something like 24 bulkers and tankers (some under construction) and an equal number of offshore support vessels.
The falling oil prices and reduction in offshore activity in 2016 hit the company particularly hard and in an effort to survive it laid up many of its ships, but kept them in operational condition.

One such ship was the Toisa Pegasus, which arrived in Shelburne, NS March 29, 2016. Its huge 400 tonne capacity crane loomed over the government wharf, where it was originally intended to remain for up to a year. The ship was equipped with twin bell 18 person saturation diving system and had accommodation for 199 people in order to support offshore projects. It had all the other  "bells and whistles" required for a state of the art ship, including DP3.

The ship did not stay in Shelburne for the whole year, sailing, I believe, sometime in July 2016.
Attempts to save the company through chapter 11 re-organization and re-financing did not work out and all the assets were sold off over the past several months.

Toisa Pegasus was sold to Subsea 7 for reported fire sale price of $38,950,000 and renamed Seven Pegasus. It has now left its last layup port of Perama, Greece for Rijeka, Croatia, where it will have a refit. It is expected to go to work in the North Sea in the 2Q 2019. (The second quarter of this year.) 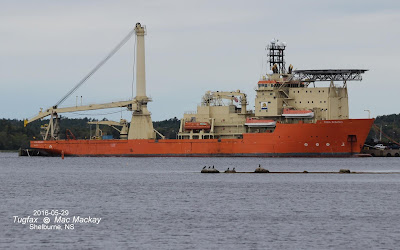