As spring arrives we can expect to see a bit more towing going on around Halifax, although there has been regular tug activity since January with the Halterm dredging project. With the larger tug Mister Joe off to Shelburne, the smaller tug J.F.WHalen must now herd the dump scows from the dredge all the way to Fairview Cove where the spoil is deposited.

With a bit of a head wind today J.F.Whalen was really leaning in on its scow as it worked northward, but was making good time nevertheless.

The versatile small tug, with 540 bhp is small enough to be carried around on the deck of the dredge when they move from port to port. Its aluminum wheelhouse is also detachable and the house and hull can then be moved by truck if needed. That is how it was delivered to Halifax first in 2014 from the builders, Chantier Naval Forillon in Gaspé. The boat is twin screw with flanking rudders and removable push knees. A sister tug D.J.Stanyar works for McNally Marine in Onrtario. 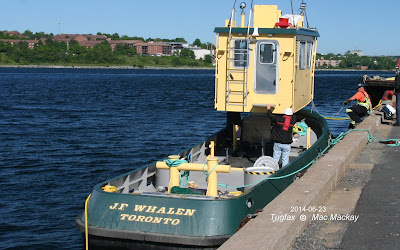 While J.F.WHalen was readying another scow, the Canadian navy tug Glenevis was picking its way out to sea towing  HMCS Moncton.

Glenevis ATA 642 is one of  three Glen class tugs based in HMC Dockyard, Halifax and operated by the Queen's Harbour Master with a civilian crew. The 1750 bhp VS tractor tug was built in 1976, and although there has been talk of replacements for many years, there does not appear to be anything on the horizon. But as it is election year I expect something will be said before October.


Glenevis is well suited to harbour berthing duties within tight confines, but also for coastal towing with light displacement vessels such as Moncton. It is one of six Maritime Coastal Defence Vessels based in Halifax (Six more are based in Esquimalt, BC). One or two of them are in refit in various shipyards around the region at any given time, and one of the Glens usually tows them to and from..
Voyages extend from Shelburne to Pictou, Sydney or even St.John's.

In view of ice conditions to the east, I expect this tow to be headed for Shelburne. [to be updated].