Stopping over in Halifax for a few days is the veteran Atlantic Juniper. She is likely traveling from her summer base in Belledune, NB to Saint John or possibly Shelburne for winter maintenance. 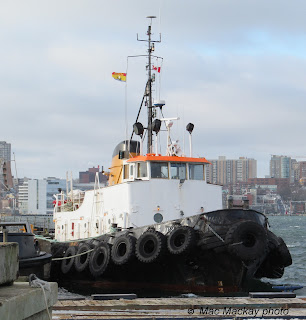 Built in 1961 in Southampton England for Red Funnel tugs, she was originally the Thorness and fitted with two Crossley engines totaling 1340 bhp and driving twin screws.
J.D.Irving acquired the tug in 1983 with fleet mate Culver (a fire tug of similar design) and came to Saint John. They joined several other Red Funnel tugs, also owned by Irving, the former Atherfield which had become Irving Hemlock and is now Swellmaster and the former Dunnose which became Irving Willow.
Torness was renamed Irving Juniper in 1985 and Atlantic Juniper in 1996 and worked in Saint John as a harbour tug for many years. She was re-powered in 2000 with Cat engines, giving approximately 2,000 bhp.
The tug was imported after the implementation of new Canadian rules requiring all crew sleeping accommodation to be above the waterline. Since most of her quarters did not qualify she has operated as a day boat. 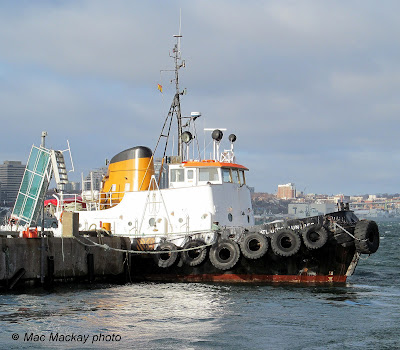 The tugs funnel, like many boats built by J.I.Thornycroft & Co Ltd of Woolston, UK, is slim and sleek- the height of fashion at the time.
Posted by Mac at 10:12 PM