1. Atlantic Oak has the bow line and Atlantic Willlow the stern in the cold move* of the newly launched patrol boat.

Among the many duties of the Halifax harbour tugs is attending launches at Halifax Shipyard. This morning it was the third in a series of Coast Guard patrol vessels taking to the water.  Each launch is different, but this morning's windy conditions combined with the light :    Correction: the ship was held in position until the cradle cables were released and the hull was checked for water integrity, then it was released to launch. Tugs took control immmediately.
The same thing happened with the first patrol boat in the series hung up on the launch way due to high winds, but htis one went off without a hitch. The harbour pilot, a crew from Connors Diving and the tug crews knew how to handle the situation. There was a shipyard deck crew on the ship itself.
With some careful line work, the patrol boat CCGS Corporal Teather C.V. was persuaded into the water, in control of the tugs Atlantic Oak and Atlantic Willow and took over the moved to pier 9B for fitting out work. The ship did not use any of its own engine, and a package generator on deck for lighting was all that was running aboard the ship.
The tugs had to gentle the ship alongside (squeezing it in between other berthed vessels) without touching the new ship any more than necessary. I understand that the stern line might have parted at one point, but it was made up again and all went well. 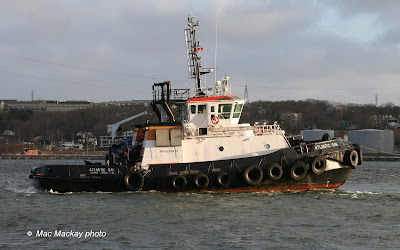 2. Atlantic Oak has no weight on the line as the wind and momentum carry the new ship towards its fitting out  berth. 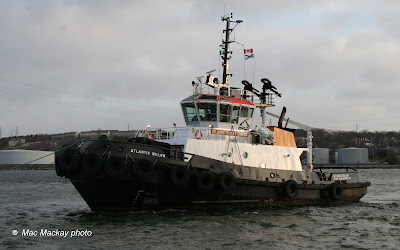 3. Atlantic Willow has just made up a new line after the first one parted. They appeared to be using very light line, not the tug's usual ship docking winch line.