Groupe Océan of Quebec City won the contract to tow the Canadian warship HMCS Athabaskan from St.Catharines, ON to Halifax.. As recounted in Shipfax the job has not been without its challenges!
Assigned to the job were two veteran tugs, but without doubt they were the best for the job.

Ocean Delta is the only truly deep sea tug operating on Canada's east coast (not counting anchor handling tug/suppliers) . Built in 1973 as Sistella for ITC (Tschudi and Eitzen=International Towing Contractors) it became Sandy Cape in 1978 and was acquired by Québec Tugs, then part of CSL Group Inc, in 1980. Renamed Capt. Ioannis S. it served the company well, and was renamed in 1999 when Océan Group took over and rebranded/renamed the company. The tug has ranged as far south as the South America and well into the high arctic.
It has also been extensively rebuilt and meticulously maintained. It was built with a pair of Nydqvist and Holm engines giving 5600 bhp, with a 65 tonne bollard pull, but was re-engined in 2000 with two MaKs, giving 6,464 bhp through a single controllable pitch prop. 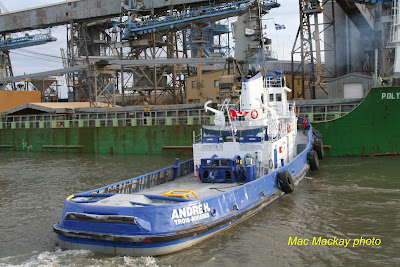 André H., despite its size and relatively low power, has been involved in countless tows, many of them well beyond the coastal waters for which it was built. It has also figured in numerous salvages and rescues over the years. Built as Foundation Valiant in 1963 it became Point Valiant when Eastern Canada Towing took over Foundation Maritime's fleet ten years later. In 1995 it was sold to Three Rivers Boatmen, and acquired its present name.When Groupe Océan acquired TRB the tug kept its name and continued to be based in Trois-Rivières until fairly recently when it was moved around to Sorel and spent some time in Sept-Iles. It has also been extensively refitted and well maintained. Equipped with a pair of durable 5 cylinder Fairbanks Morse engines driving twin open screws, it delivers 1650 bhp.

Ironic photo:
In September 1980 the tug Capt. Ioannis S. (now Océan Delta) was towing the two old lakers Helen Evans and Thornhill to Columbia for scrap. The tug's controllable pitch prop failed, suddenly putting the tug in reverse, and severing the tow line. And which tug went to the rescue? Non other than  Point Valiant now André H. The whole flotilla came in to Halifax for several days of repairs.
Posted by Mac at 1:49 PM