Boston has always been a great place to see tugs of all sorts, from big to small and new to old. A recent visit, after many years, confirmed this opinion.

Boston Towing + Transportation, part of the Reinauer Transportation Companies LLC, provides most of the harbour towing work, and operates a fleet of some modern and some traditional tugs. 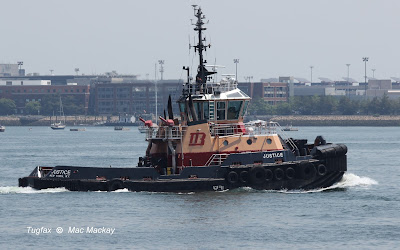 Justice is a Robert Allan RA3000 design ASD tug with FiFi 1 capability. It is powered by two MTU engines of 5,400 bhp driving Rolls Royce CPPs giving 65 tons bollard pull. It uses  the main engines to power the fire pumps.
Built by J.M. Martinac Shipbuilding Corp of Tacoma, WA in 2009 for offshore LNG terminal work (that contract ended in 2012) it is now the largest harbour tug and is used for tethered escort work, and carries winches fore and aft. 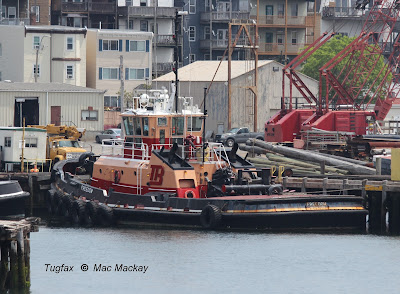 Freedom was built in 2003 by Washburn + Doughty of East Boothbay, ME, and is a 4400 bhp ASD tug, powered by Caterpillar main engines with separate fire pump engines. It delivers 55 tons BP through its fixed pitch Rolls Royce thrusters. It is also fitted with winches fore and aft. A sister Liberty is built to the same specifications.

The classic H.J.Reinauer dates from 1979 when it was built by Jakobson Shipyard, Oyster Bay, NY as Rowe for Boston Towboat. When Boston Fuel Transportation acquired Boston Towboat in 1985 it was given its present name. The tug is powered by a 16 cylinder, 2,000 bhp EMD driving a single prop in a fixed nozzle. It still sees service, and is maintained, like all BTT tugs, in pristine condition. 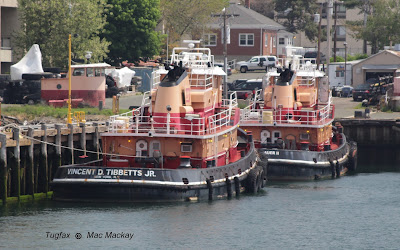 Vincent D. Tibbetts Jr was built in 1972 by Southern Shipbuilding of Slidell, LA. It is a twin screw tug of 3,000 bhp powered by 2 - 12 cylinder EMDs. Originally named Daley it was also renamed in 1985.
Sister Harold A. Reinauer II is the former Cabot. Both see regular use as ship berthing tugs.

A typical tanker arrival, such as Irving Oil's East Coast has Liberty standing off the starboard bow with Harold A. Reinauer II tied on at the port bow and Justice as tethered stern escort. A bascule bridge passage and tight turns are needed to see the ship to its berth in Chelsea Creek. 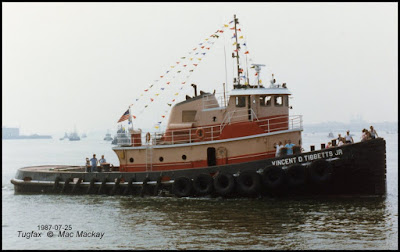 Although taken in 1987, there would be little visible difference if this picture had been taken this year.
.
Posted by Mac at 11:25 PM