Boston harbour is home to several veteran tugs - some still working, some restored and some apparently awaiting some unknown future.

The prime classic tug in Boston has to be the Luna. Built in 1930 it is said to be the first (and at this point only remaining) wooden hulled, diesel electric ship-docking tug. (The first diesel electric tug was built in 1924 for the Pennsylvania Railroad for barge service in  New York harbour.)
Powered comes from a pair of 6 cyl. Winton diesels of 380 bhp each, connected to two General Electric DC  generators of 250 kW each. Through a pair of exciters and a deadfront switchboard,  power is delivered to a single, shaft mounted GE motor of 600 hp driving the single screw. 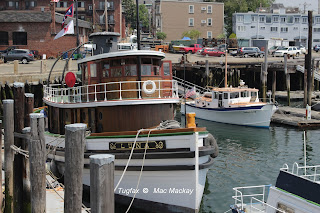 The ship's wooden hull was built by M.M.Davis Shipbuilding Co of Solomon's MD, and outfitted by Bethlehem Steel Shipyard in East Boston and Boston Tow Boat's own shops.
After front line service with Boston Tow Boat it was eventually retired in 1979 and languished until the Luna Preservation Society took control in 1985. Declared a National Historic Landmark in 1989, restoration has proceeded ever since. A full hull restoration took place in East Boothbay, ME in 2000. The restoration is at such an advanced state now that plans are in place for a new berth in Charleston Naval Shipyard and it is expected to be open to the public this year.

Among the in-service tugs, there are still a number of older vessels. 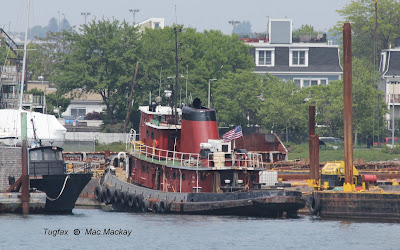 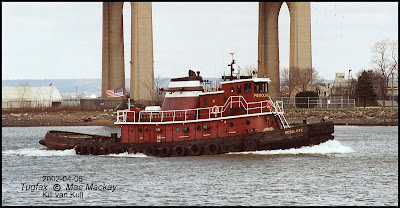 Ocean King dates from 1950 when it was built by RTC Shipbuilding of Camden, NJ for Baker Whiteley Towing Co of Baltimore, MD. McAllister Bros took over the company in 1980 and the 1800 bhp single screw tug became the David McAllister. The re-organized McAllister Towing and Transportation renamed it Resolute in 1997 and sold it in 2011 to its current owners, Patriot Marine LLC of Winthrop, MA.
They renamed it Ocean King recalling an older tug of the same name, which also worked out of Boston for many years for Farrel Ocean Services, and towed as far as Newfoundland on occasion. 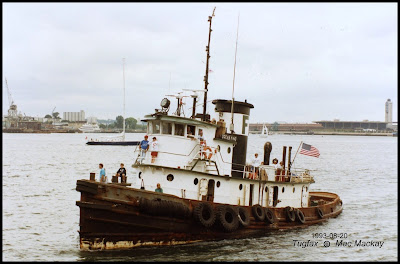 Built in1945, the previous Ocean King was still going strong in 1993, still without direct engine control from the wheelhouse - it was a "bell boat". It is reputed to be still in existence, now registered in Las Vegas as a pleasure craft.

Another tug currently registered as a pleasure craft is the venerable Gaspee. 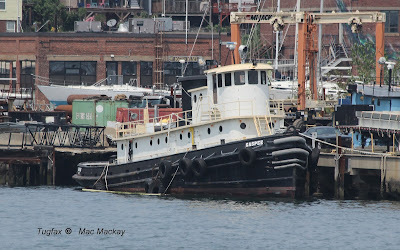 Dating from before 1940 when its unfinished hull was acquired by the Providence Steamboat Co, from Russell Erie Basin, Brooklyn, the big old single screw tug was powered by a 1440 bhp Nelseco engine. It was re-engined in 1960 with a 16 cylinder Fairbanks Morse of 1800 bhp, acquiring a shorter stack in the process. 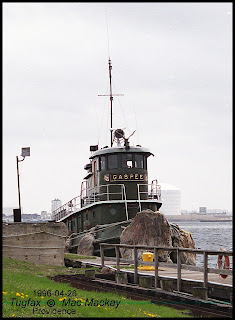 In its pristine green livery with Providence Steamboat Co, the tug was an impressive sight sporting huge rope puddings on the bow and rails.


Another pair of older tugs came into view, perhaps not as old the previous ones, but they appear to be working still. Both are owned by Burnham Associates of Salem, MA, a dredging and marine construction company. 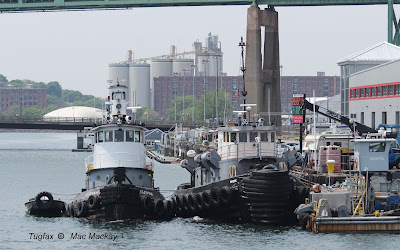 Natick has carried the same name since built in 1961 and delivered to the US Navy by Jakobson Shipbuilding of Oytser Bay, NY. They had completed a hull started by Southern Shipbuilding of Slidell, LA. Given the pennant number YTB-760, it was the lead tug of a class of eight large harbour tugs.
From 1961 to 1964 it served in Norfolk VA, from 1964 to 1967 at Holy Loch, Scotland and then followed a number of years in La Maddalena, Italy.
It was stricken from the Navy list in 2003 and sold in 2005 to Burnham.
The single screw tug is powered by a 1200 bhp engine, likely a Fairbanks Morse. 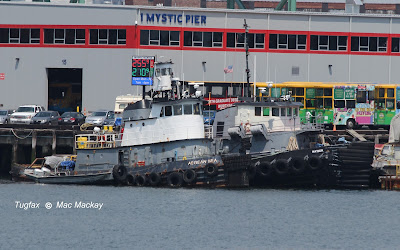 Fleet mate Aegean Sea is slightly newer, built in 1962 by Equitable Shipyard in Madisonville, LA.
As Bronx 4 until 1979 it worked for Bronx Towing Line of New York, then passed through Hudson River Towing Co until 1987 as H.R.4, then Barker Marine Ltd as John C. Barker until 1989, and Disch Construction Corp of Summit, NJ as Jersey Coast until 1994.
Roehrig Maritime Co of Staten Island bought the tug and gave it the name Francis E. Roehrig. In 2004 they sent it to Atlantic Drydock in Jacksonville, FL where its 1300 bhp (total) Cats were replaced with two 1200 bhp Cats, providing 2400 bhp to its twin screws.
The Roehrig company was sold to K-Sea Transportation in 2006 and the tug became Aegean Sea. When K-Sea was sold to Kirby, Kirby assigned the tug to River Associates, which they then sold to Vane Brothers. Vane sold the tug on to Burnham, the current owner in 2013.

Several more antiques languish in the backwaters of Boston harbour awaiting a savior or the torch.
Easter Towboat Corporation are the owners of what is believed to be the New Jersey (ex Cross Harbour 1) painted in their colours, but for sale since at least 2008.
Eastern also owns the Cynthia Nicole which was acquired as the Cynthia Moran in 2006, but is as yet unpainted. 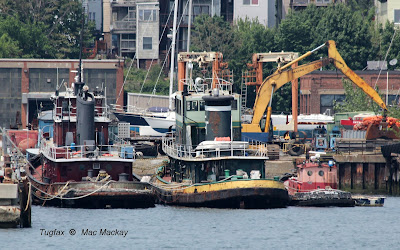 Cynthia Nicole, New Jersey and the workboat Heidi at ET's base.
Another tug, with a blue house, is hidden forward of the Cynthia.

There may be more, but they are for another time.