Two tugs made an unplanned visit to Halifax today for medical assistance. En route from the US east coast to the Great Lakes, the Erie had the Ontario in tow when they diverted from their planned route. 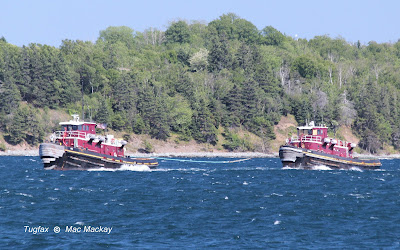 The tow line is shortened up as the pair make their way inbound in choppy seas and a stiff breeze.

Both tugs were bought last year by The Great Lakes Towing Company of Cleveland, OH after lengthy careers with the US Navy and McAllister Towing and Transportation of New York. 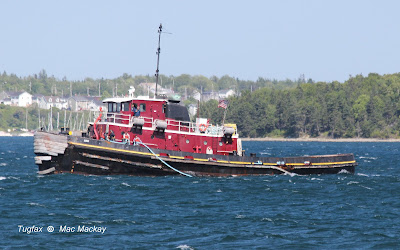 All Erie's hands are on deck to walk the tow line forward.

Erie was built in 1971 by Petersen Builders of Sturgeon Bay WI as YTB 810, Anoka and was based in Norfolk, VA. In 2001 McAllister bought the tug and renamed it Missy McAllister. 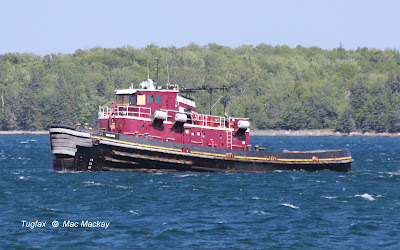 Ontario has no crew aboard and still wears McAllister colours, although the grey bow fenders are remnants of navy days.

Ontario dates from 1964 when it was built by Mobile Ship Repair in Mobile AB as YTB-770 Dahloega and was also based in Norfolk until 2001. Under McAllister ownership it was renamed  Jeffrey K. McAllister. 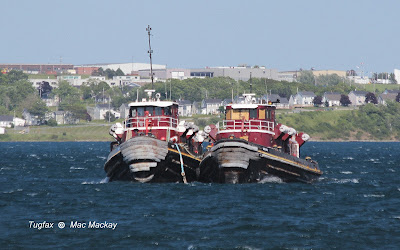 The two were brought together quite nicely without tangling their house mounted high fenders, another naval artifact.

Both tugs are of the large Natick class single screw ship berthing tugs. Erie is rated at 2,400 bhp and Ontario at 2,000 bhp. The engines are likely Fairbanks Morse. 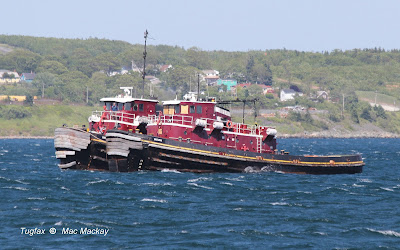