Halifax based Horizon Maritime has just announced an alliance with the Dutch tug company Kotug International BV to go after harbour and terminal work in Canada under the Kotug Canada banner.

In one of those huge upheavals common in European tug operations Kotug and partner Boskalis sold their Kotug SMIT tug operations earlier this year to the large Spanish operator Boluda Group.
Kotug SMIT had only been in existence since 2016, but operated in eleven ports in four countries.

Kotug had originally shaken up the European tug world by straying from their Dutch harbour tug base into Germany and France where complacent traditional operators enjoyed monopolies but were also bound by high priced labour agreements. Kotug took the companies head on and generally prevailed, in some cases despite legal challenges. 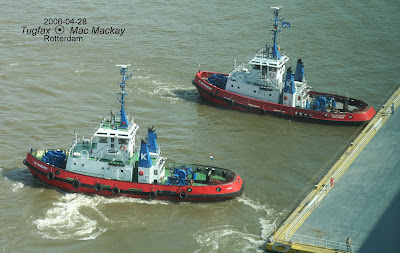 The Voith Schneider VS Hamburg and VS Rotterdam exhibited the owner's ambitions to spread beyond the Netherlands.

Among the companies shaken up by these moves was the main Dutch operator Smit. It was eventually picked off by Royal Boskalis Westminster a Dutch dredging and marine construction firm, that was not so much interested in harbour towage, but in their other assets internationally. However they did merge their European harbour tug operations with Kotug and controlled a big chunk of that tug work in Europe. However Boskalis remained more interested in its international construction work. 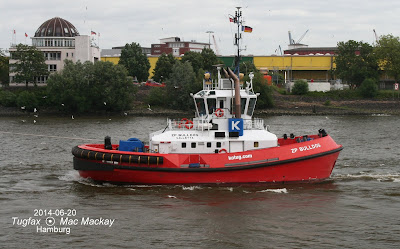 Kotug are also known as innovators and are certainly ambitious and when Boluda came calling they decided to cash out. By this time Kotug had also expanded internationally with terminal contracts as far afield as Australia, and opted to concentrate on those greener pastures, leaving Europe to others. They also have operations in Russia, Asia, the Caribbean and Africa and operate more than 100 tugs.

Canada does seem an odd choice (on either coast) for ambitious operators, since there are few harbour or terminal operations that might be up for grabs. The Svitzer contract at Point Tupper is about the only sizeable contract that might be in play in eastern Canada. In fact there are few terminals in Canada that have separate contracts within ports.

The trend in Europe for container lines to have exclusive berthing contracts has not taken hold in Canada since major ports usually have only one tug operator.

Certainly the established companies, Groupe Océan and Atlantic Towing Ltd seem to have  a lock on harbour work in the eastern ports. They have displaced Svitzer from all its long standing areas, and Svtizer was unsuccessful when it attempted to break into the Montreal work. Even its Strait of Canso work is in the form of a joint venture with Atlantic Towing. (So is ship berthing in Halifax, at least on paper.)

Both oil terminals in Newfoundland, Newfoundland Transshipment and North Atlantic Refining, own their own two tug fleets under long term management, altough the tugs are aging.

Horizon is a relative newcomer to the industry and until now has concentrated on offshore work. It lost out to Atlantic Towing for the west coast ETV contract, however they did cry foul on the award and may get another kick at it.

On the west coast tug, Smit also sold out to its partner SAAM in SAAM Smit. Seaspan remains a major force in Vancouver,  but new terminals of various sorts are planned or under way.

Kotug are certainly innovators, having developed and patented, the ROTOR tug. With three engines, the tugs have two omni-directional thrusters forward, in conventional tractor tug arrangement and one aft, and are thus extremely agile, and powerful. They may be able to capitalize on innovative solutions to specific harbour or terminal needs. 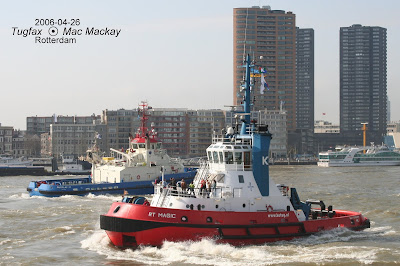 RT Magic, a ROTOR tug, can (and did) run circles around conventional ASD tugs... 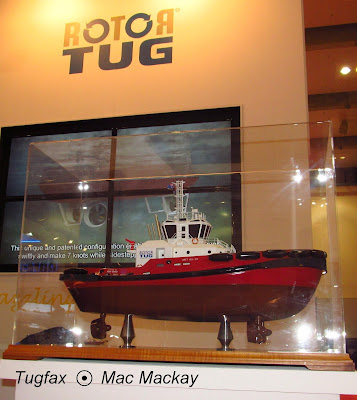 ... with two thrusters forward and one aft.

One interesting tug in the Kotug SMIT fleet was SD Jacoba, built in 1998 by East Isle Shipyard in Georgetown, PE (part of Irving Shipbuilding Inc) as Atlantic Fir (ii). It was sold after short term use  to Kotug. The first Atlantic Fir was built in 1995 and sold to J. Ostensjo of Norway and renamed Alex. The third Atlantic Fir, built in  2005, currently operates in Halifax. 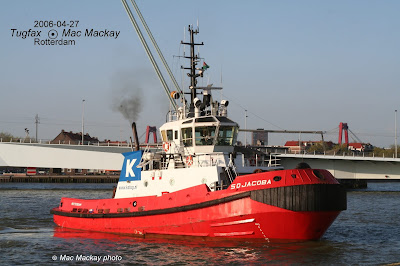 Note:  All the photos above were taken before the formation of Kotug Smit, and all the tugs shown have been taken over now by Boluda, with the exception of the RT Magic which operates for Kotug International in Mozambique.