My error in my last post about Foundation's triple deckers was eventually corrected, but not until three days had passed, so may have been missed by many readers.

For the record Foundation Vera was not the first "triple decker" in the fleet. In fact Foundation had triple deckers a full ten years earlier in its operations. So, a little summary of the company history is needed. As it has been so memorably documented by the late Farley Mowat in Grey Seas Under, the Foundation Company of Canada got into the salvage business almost accidentally. During the Great Depression of the 1930s, when the company was looking for a tug to tow its marine construction equipment, they stumbled across and bought the Foundation Franklin at a distress price. It was such an exceptional vessel and so suited for salvage work that the company's east coast operation Foundation Maritime became as much a salvage company as a construction company.

It soon became apparent that having just one salvage tug was not going to be enough. The Montreal shipping and shipbuilding tycoon Frank M. Ross had acquired* four new tugs in Scotland for his company Ross Towing and Salvage, and established Nova Scotia Tug Boats Ltd, with R.W.Hendry Halifax as manger/agent in 1934 (Hendry had operated flock of antiquated tugs under various company names including Halifax Tow Boat Co) . The new tugs were to be based in Halifax in the winter and Montreal in the summer.  Ross was soon persuaded to sell two of the tugs to Foundation Maritime, and Maritime Towing and Salvage was established in 1935 to operate the tugs primarily as harbour tugs in Halifax, but to be capable of light salvage and coastal towing work.
* [It is almost certain that the tugs were originally ordered by James Towing + Dredging but either cancelled and completed on spec, or refused on delivery, due to the economic crisis.]

Bonscot, renamed Banscot and Banshee were state of the art for the day, 90 feet long steamers of 950 ihp, reinforced for working in ice and fitted with firefighting pumps and salvage gear. Builders A. Hall of Aberdeen, Scotland used a typical British tug design with open bridge. (All the better for ship's pilot, tug skipper and crews to both see and hear voice and whistle commands.) 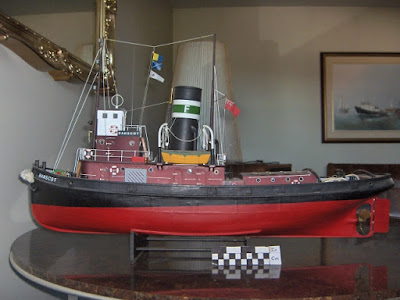 A model of the Banscot shows a small wheelhouse built on the flying bridge, perhaps of wood.

It was not long however until it became necessary to build a rudimentary wheelhouse on the open bridge to protect the helmsman and skipper from the elements - particularly in Canadian winter. So either Banscot or Banshee must take the ribbon for the first "triple decker".

At some point the new wheelhouse was replaced by a more permanent structure and some of the navigation equipment, such as the RDF, moved up to join the standard compass and helm. 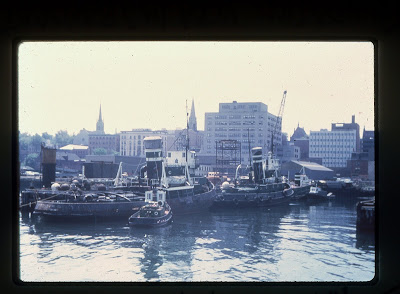 Foundation Vera and Banscot laid up in Halifax in 1966 were eventually scuttled in 1968. Their wheelhouses appear to be steel but still fairly rudimentary.

Whether the original wheelhouse remained operational is not known to me. However by the time the first of the new built trriple deckers arrived in 1956 - Foundation Victor - the second level house became accommodation for the skipper, and the top deck wheelhouse was no longer an afterthought. 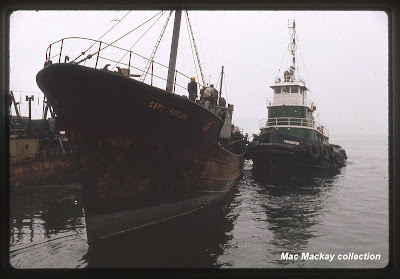 The only problem with Foundation Victor's "penthouse" was that it was a tight fit to install the console for the mandatory radar.  More room was provided in the next tug in the series, Foundation Valour by extending the wheelhouse forward and eliminating the walkway in front. 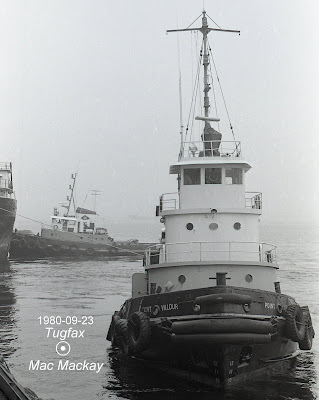 The six tugs built in 1962- Point Vigour on the left is typical - were built without the added deck.

It was a good many years before Foundation and its successors MIL Tug and ECTUG ordered any new tugs, but when they did, they were replacement "terminal" tugs for Baie Comeau and Sept-Iles and again all were triple deckers.

The company was certainly not the only one in the world to have triple decker tugs, but it is interesting to note that Cory - eventual parent company of ECTUG,  built triple decker terminal tugs for its super tanker work in Bantry Bay in the UK and used the same design of tugs for Point Tupper and Come-by-Chance in Canada. Cory never had triple deckers before that time - so where did the idea come from? 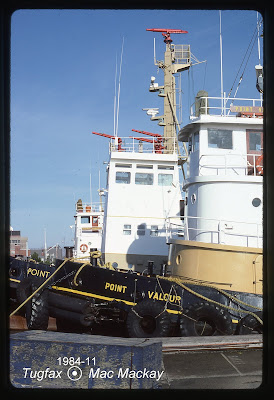 A Cory design triple decker wedged between Point Vibert and Point Valour at the Ectug dock. (Either Point Melford or Point Tupper  is the jam in the sandwich.)

When ECTUG moved to ASD tugs, the triple decker design prevailed for Point Halifax of 1986, 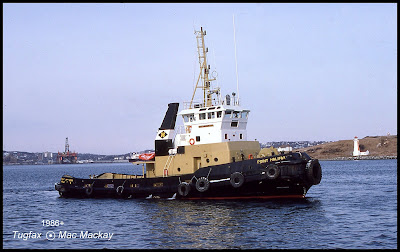 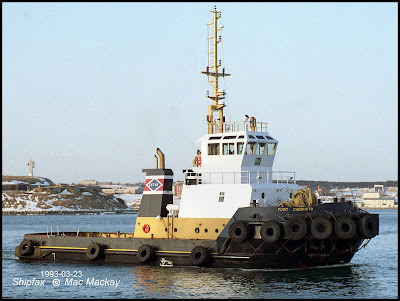 Even though they were not terminal tugs per se they were used to dock larger ships and the elevated height of eye was extremely useful.. 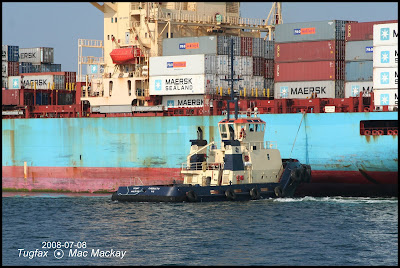 However as ships become even larger with greater and greater freeboard that advantage is now largely gone, even on moderate sized ships, triple deckers may not be needed for most ship berthing.
Today tugs work under ship's overhangs, use hull bollards and sometimes work virtually blind, relying on VHF communication. [Can you see autonomous tugs coming over the horizon?] 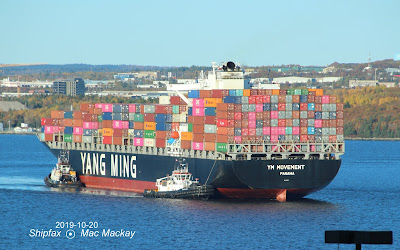 A third deck might have fouled under the stern or the bow of the YM Movement berthed in Halifax today by Atlantic Towing Ltd tugs.

Once almost a trademark of Foundation Maritime, the triple decker tug, may, like the company itself, fade from existence, just like some other quaint aspects of tug operations. 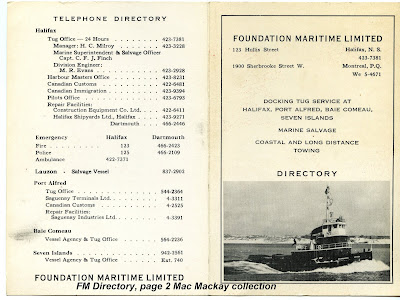 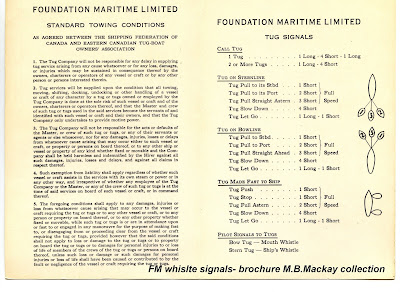