The tug R.J.Ballott (ex Jerry Newberry, Kay Cole, Point Victor, Foundation Victor) sailed from Halifax today giving Triton, NL as its destination. It is towing the barge Kaligak, loaded with construction equipment taken on at the Waterworks Construction dock in Woodside. (In my previous post I stated that the barge was being unloaded, but in fact is was being loaded.) Some of the gear will be getting a real salt water dousing on the trip. 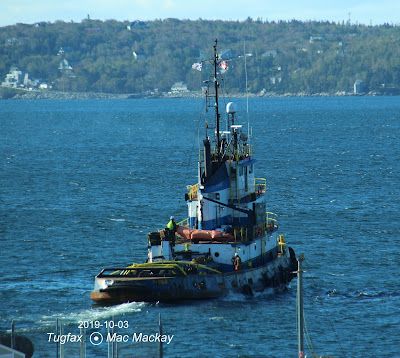 Since its Foundation days, the tug's exhaust stack has been extended, to reduce fumes in the wheelhouse. 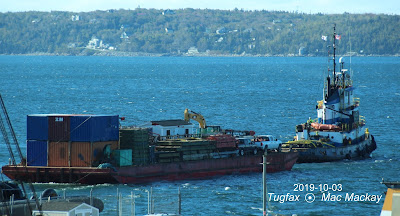 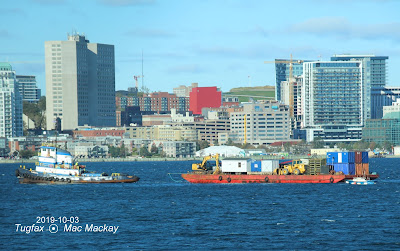 The open tug/boat Waterworks 1 (a former seine skiff) stands by to remove linehandlers from the barge.

Waterworks Construction, as the name implies, specializes in building wharfs and has sent equipment to Newfoundland and Labrador before.

Incidentally the barge, although operated by NGC Nunatsiavut Marine Inc, is maintained by McKeil Marine and has been on the for sale list for some time. NGC is the business arm of the Nunatsiavut Government (the self-governed autonomous region of Labrador established by Inuit land claims). I believe the word "kaligak" refers to a specific type of sled in the Inuit language.