R.J.Ballott at the old dock 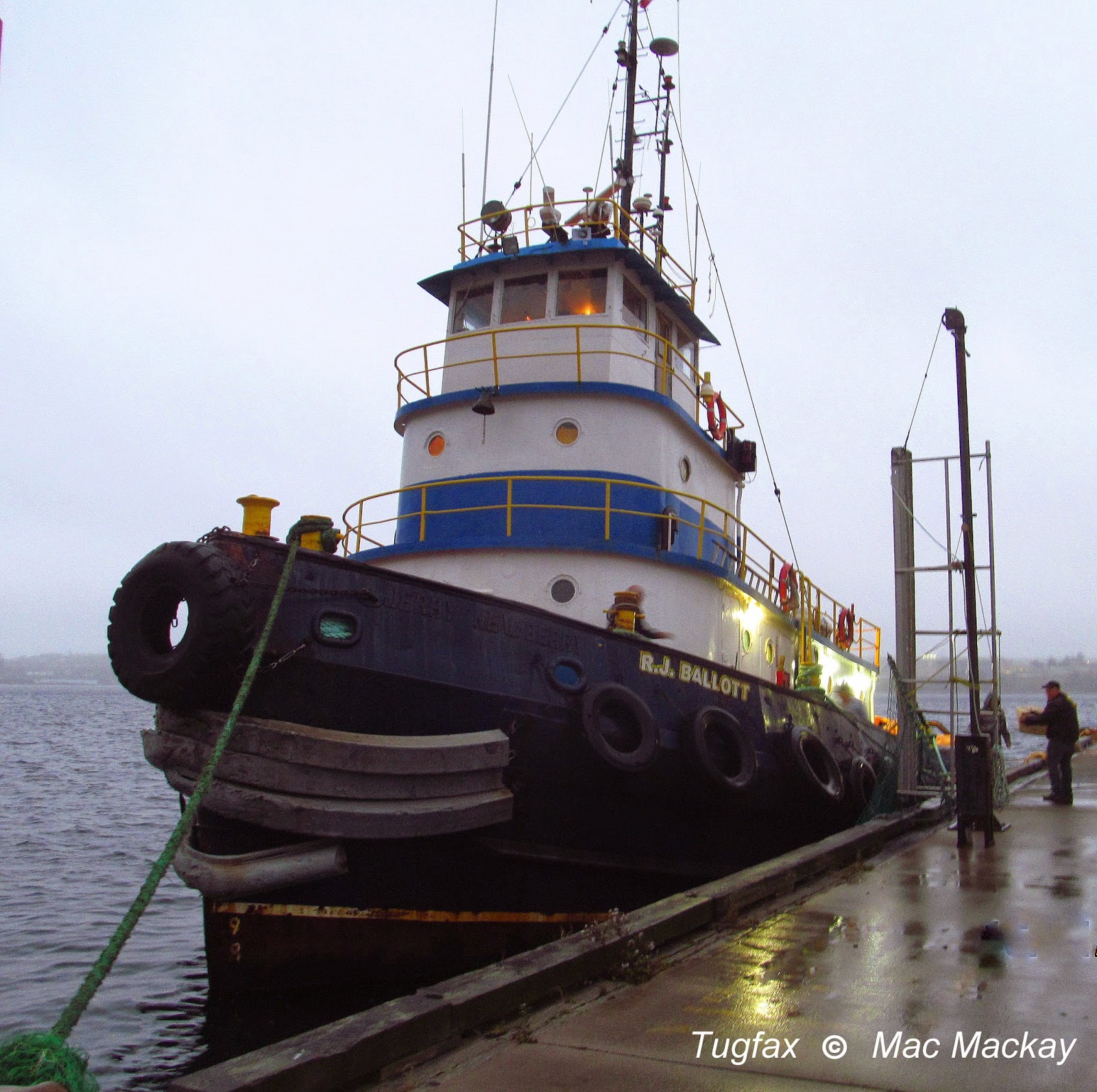 A surprise visitor to the Svitzer Canada dock (formerly Ectug, formerly MIL Tug, formerly Foundation Maritime) early this morning is the R.J.Ballott. Mention has been made of this durable tug in these pages before, most recently when it received its current name:
http://tugfaxblogspotcom.blogspot.ca/search/label/Jerry%20Newberry

A large tug for its era, with a dependable Fairbanks Morse engine (now upped to 1800 bhp) it is still a useful tug and the new owner has found a variety of work for it. Carrying rock from Wallace, NS to Caribou, PE, hauling the scrap barge for removal of the wrecked Miner at Scatarie Island and now headed for the Bay of Fundy to work on a power project, are among the many chores it is well suited for. Not just a harbour tug, it handled beautifully on its trip down to Halifax from Cape Breton last night, despite some lumpy seas and a tail wind. 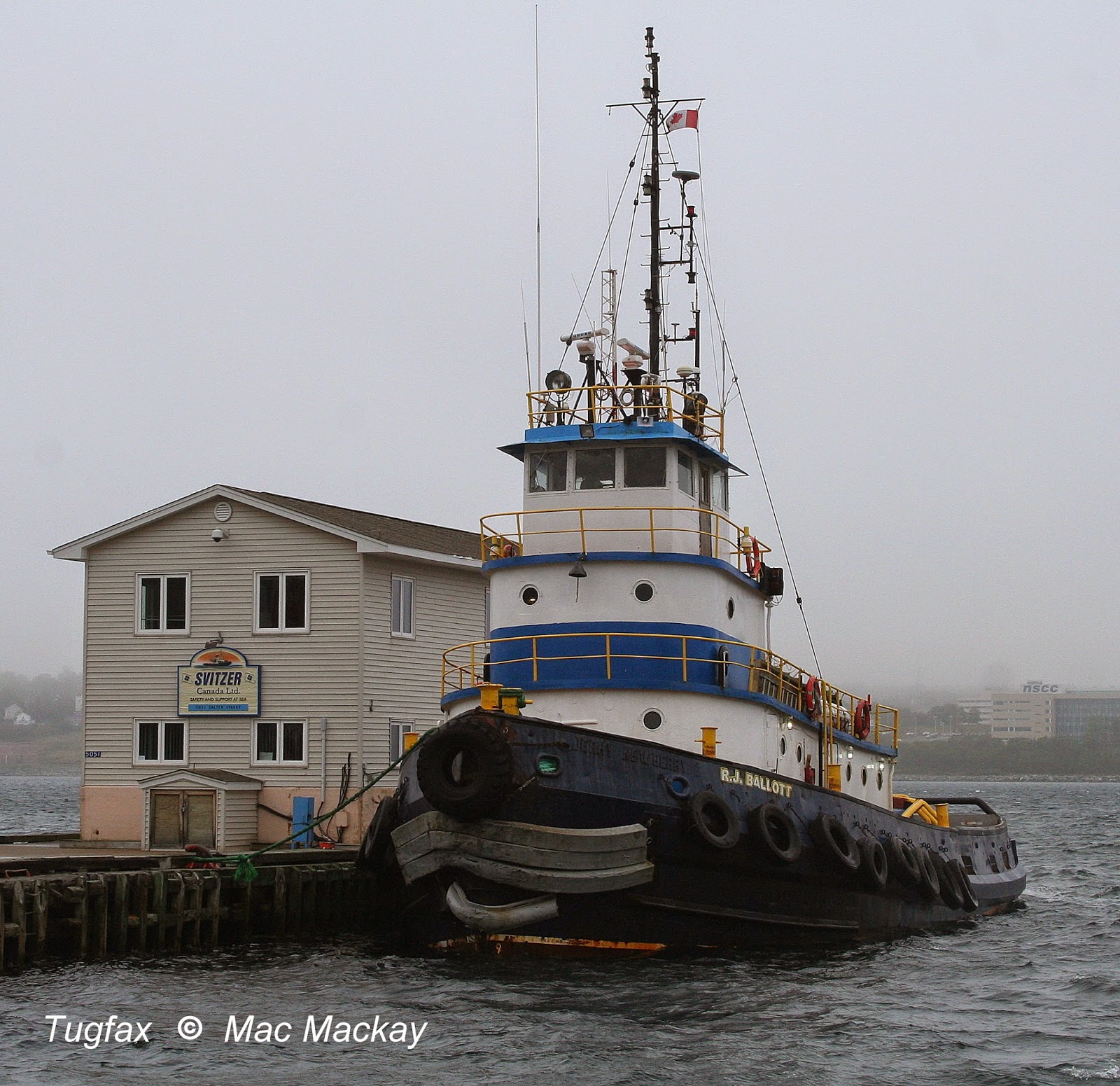 Looking quite smart at the south side of the dock this afternoon.

It was storing up this morning on the north side of the Svitzer dock, and had moved around to the south side this afternoon to make room for the pilot boat. This is very familiar territory for the tug - it was based at the same dock during its Foundation and Ectug years. 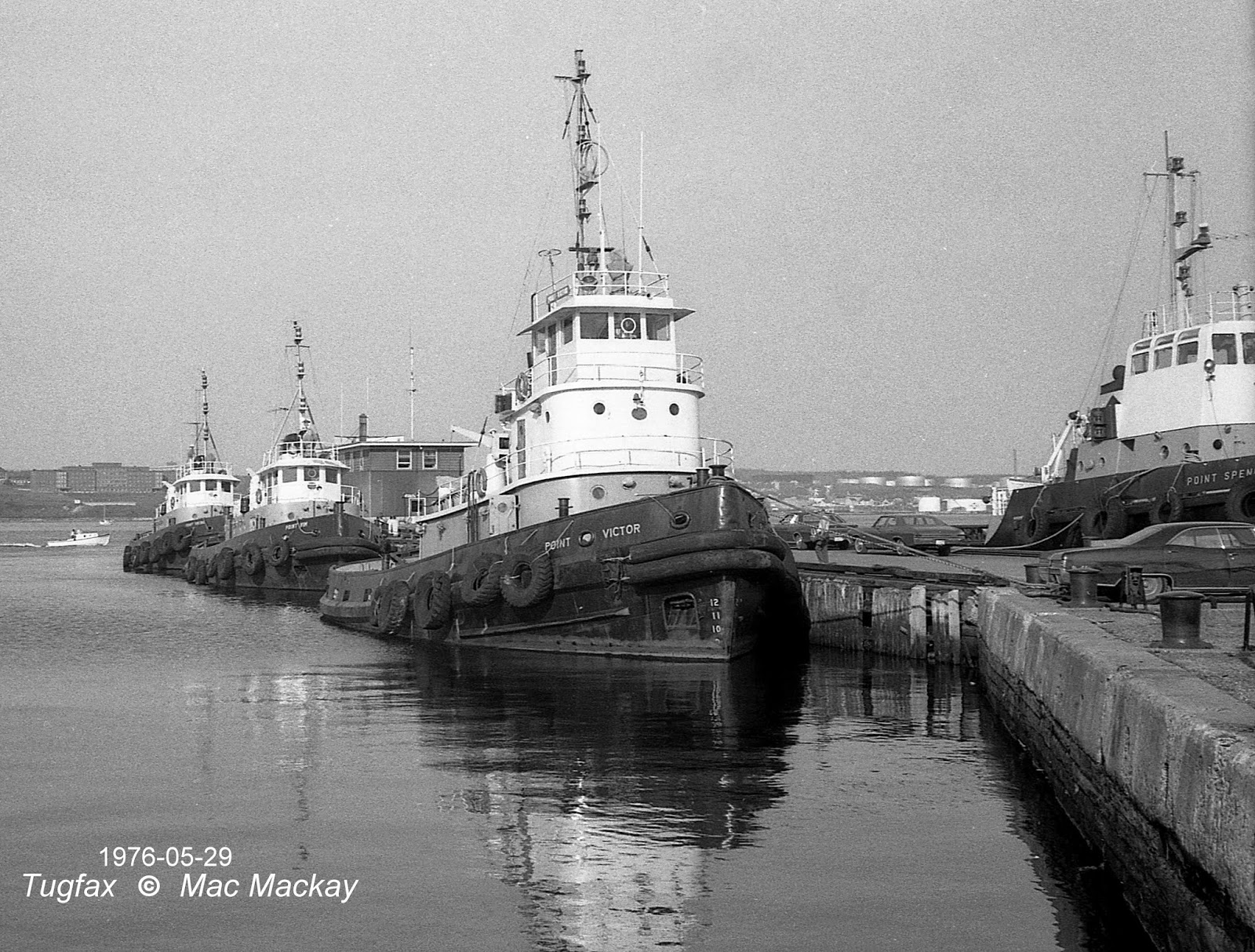 With Point Viking, Point Vim and Point Spencer in 1976 at the same dock.
Generally the outer ends of the Ectug dock were used by the duty tugs, and the inner berths by the tugs that would be on call if needed or in maintenance.

Interestingly the only tugs to tie up at the Svitzer Canada dock in the past year have been former Ectugs, and both formerly from Sept-Iles. R.J.Ballott and Océan Basques. The latter tug supplanting Point Victor as Pointe aux Basques when it was built in 1973. Point Victor then came to Halifax where it worked sporadically. It was not as agile as the smaller 1200 bhp tugs, and was only used as a spare most of the time. When the twin screw Point Vibert came back from Baie-Comeau in 1977, on delivery of the Pointe-Comeau, Point Victor was declared surplus. 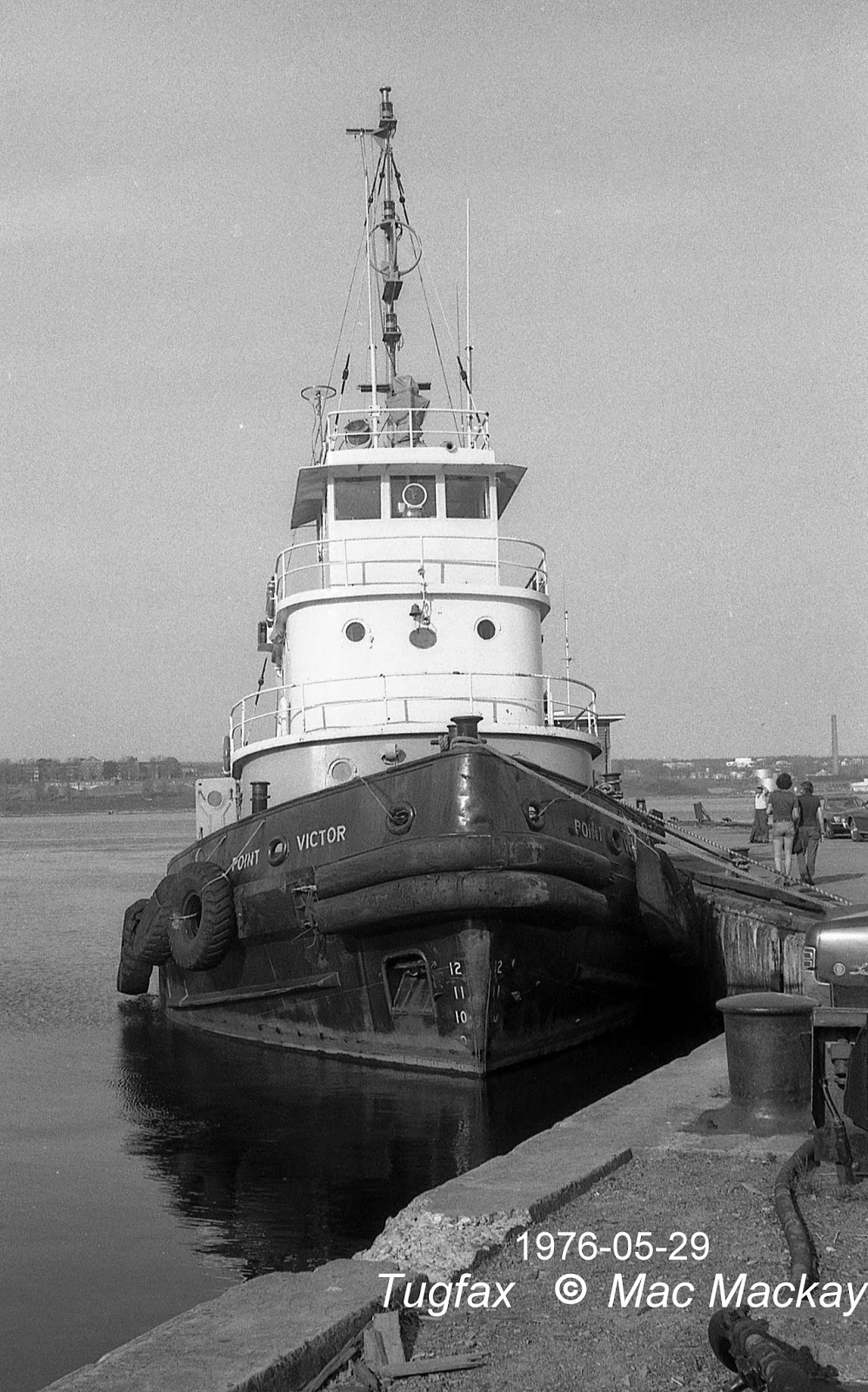 Little changed except for fendering and paint scheme, Point Victor was and is an imposing sight. 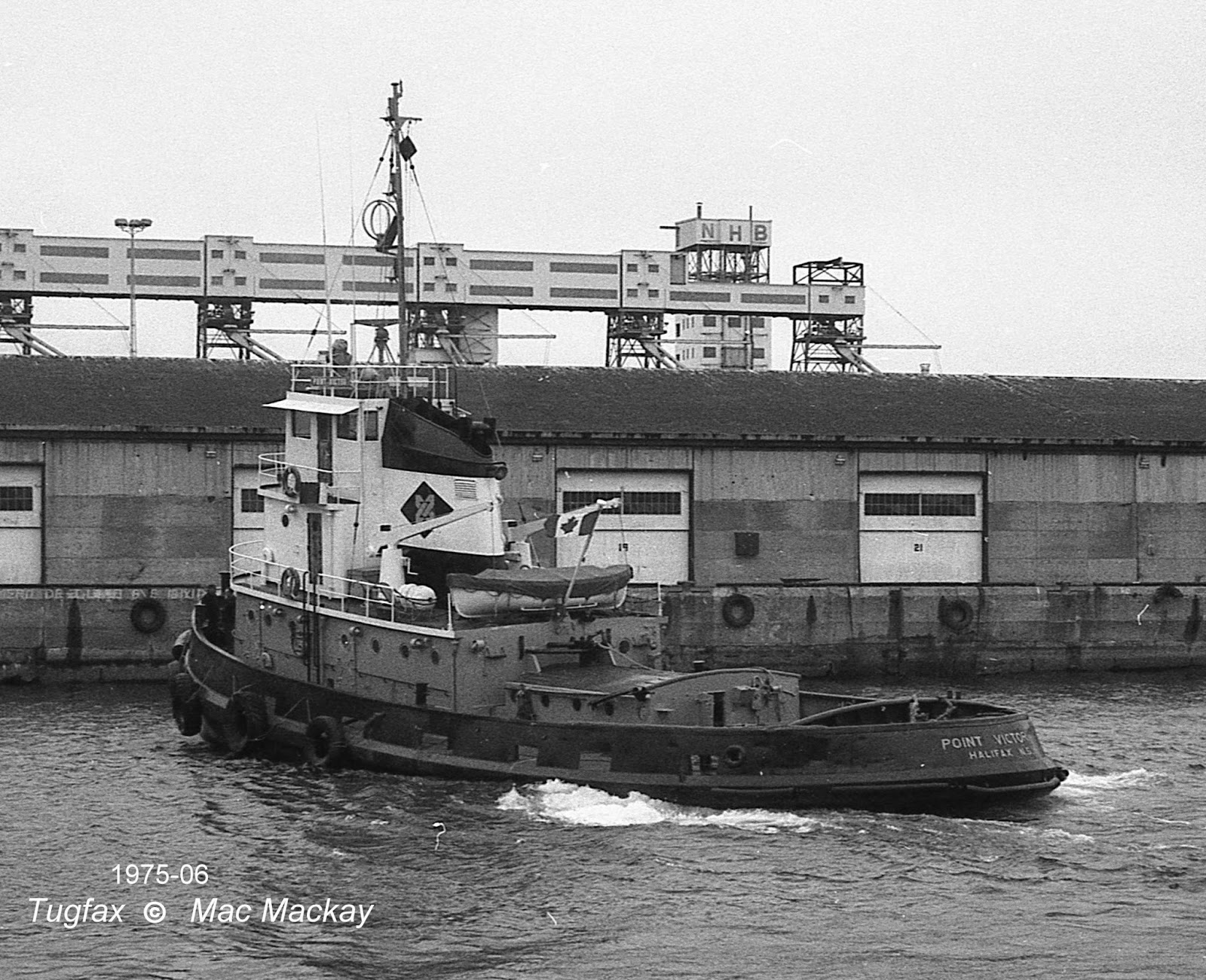 As a harbour tug, Point Victor had only a patent quick release towing hook , but was fitted with a towing winch when in McKeil ownership. Its boat has been replaced by a raft and the twin davit cranes removed. It s also now registered in St.John's.