In the last post I mentioned the Canadian Navy's fire boats. Built on the TANAC hulls cancelled at the end of World War II, they were modified with hull sponsons and a complete fire fighting equipment. 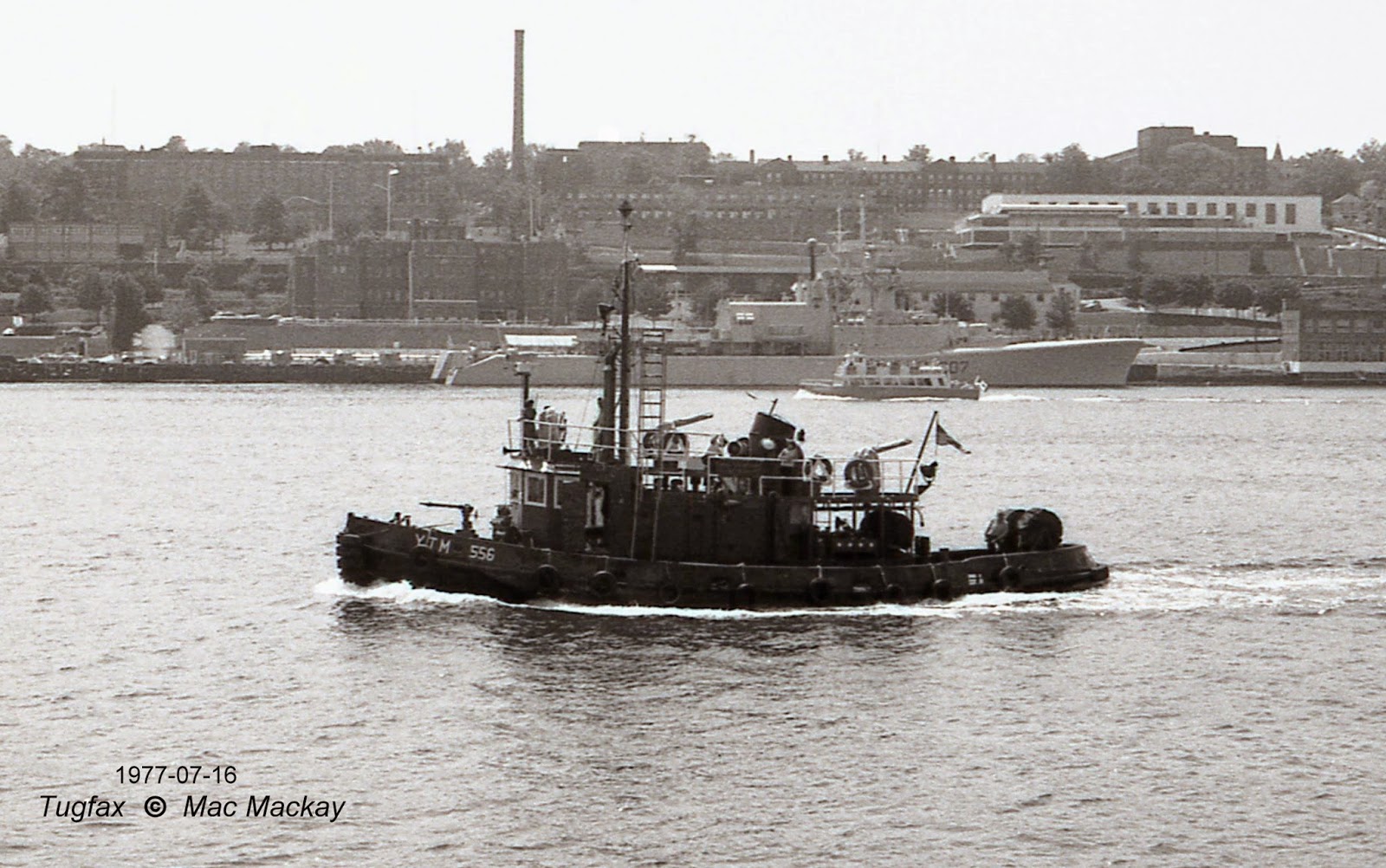 FT-1  with pennant number YTM-556 goes about its business in Halifax Harbour in 1977.

FT-1 also known as Fox was delivered in October 1946 as CN 1046. It served in HMC Dockyard until it was retired in 1979. The hull was purchased by Atlantic Salvage Ltd, a company operated by Walter Partridge, a noted salvager. His son Toby and other members of the family also operated Partridge Motor Boat Service, a harbour launch service using surplus navy duty boats Towapat, Towadon and others. 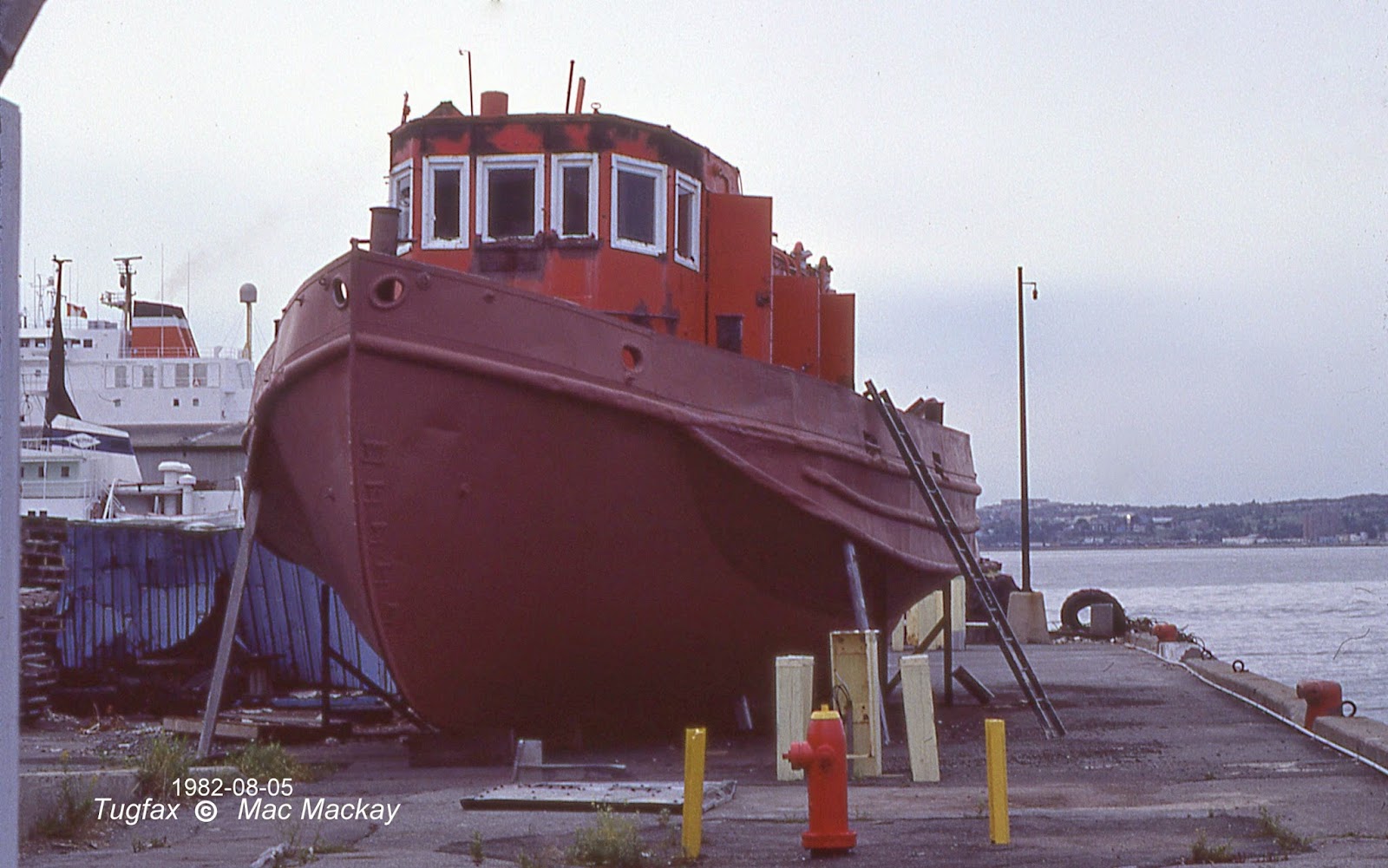 Hauled out on the end of pier 31, Fox shows off its sponsoned hull and original superstructure.

Although it took something like eight years, they rebuilt the hull into a working tug that worked in the harbour for ten years or so and formed Anchor Enterprises Ltd to operate it. 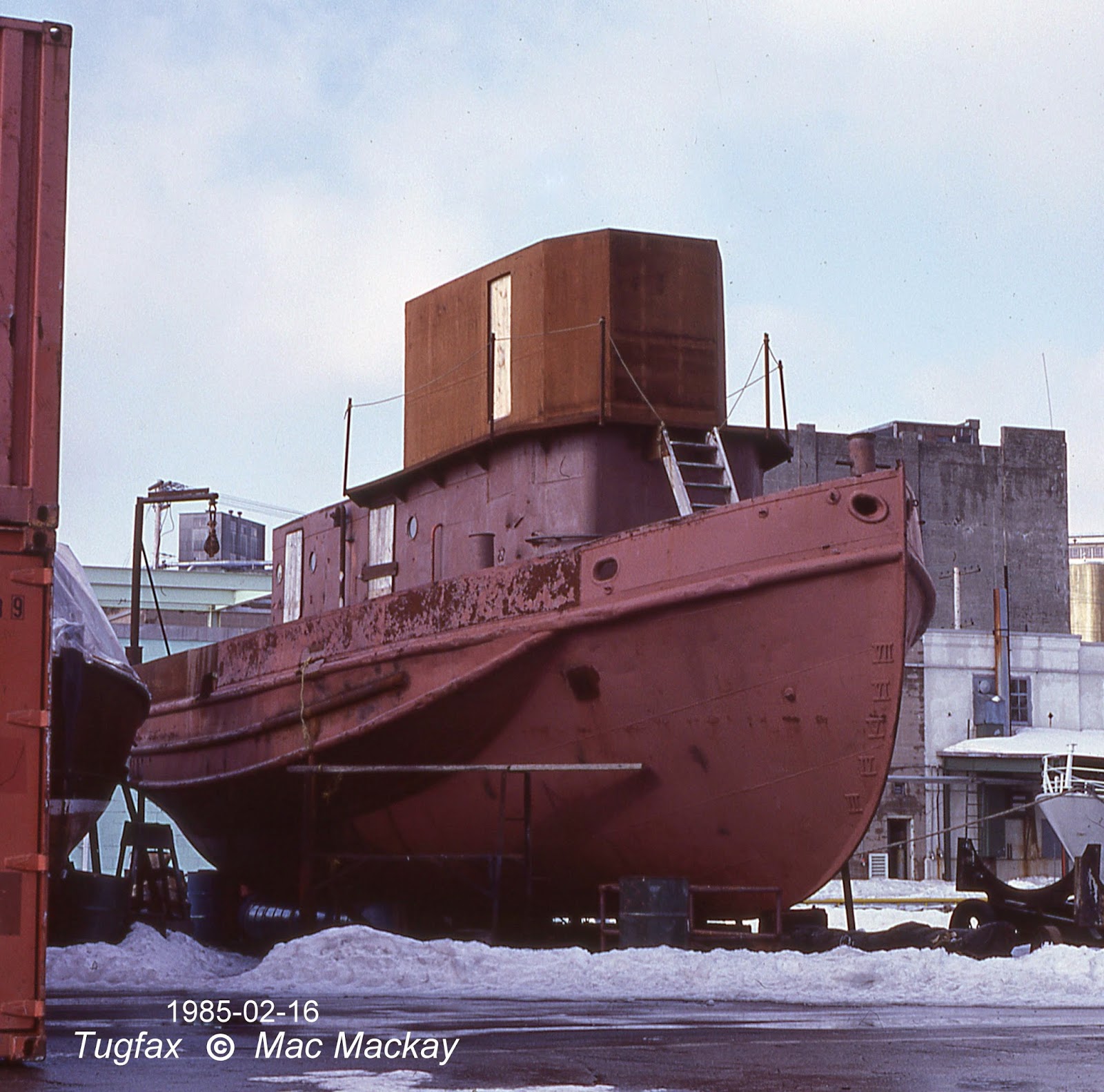 Gradually taking shape, the tug was moved to the pier 29-pier 30 area. 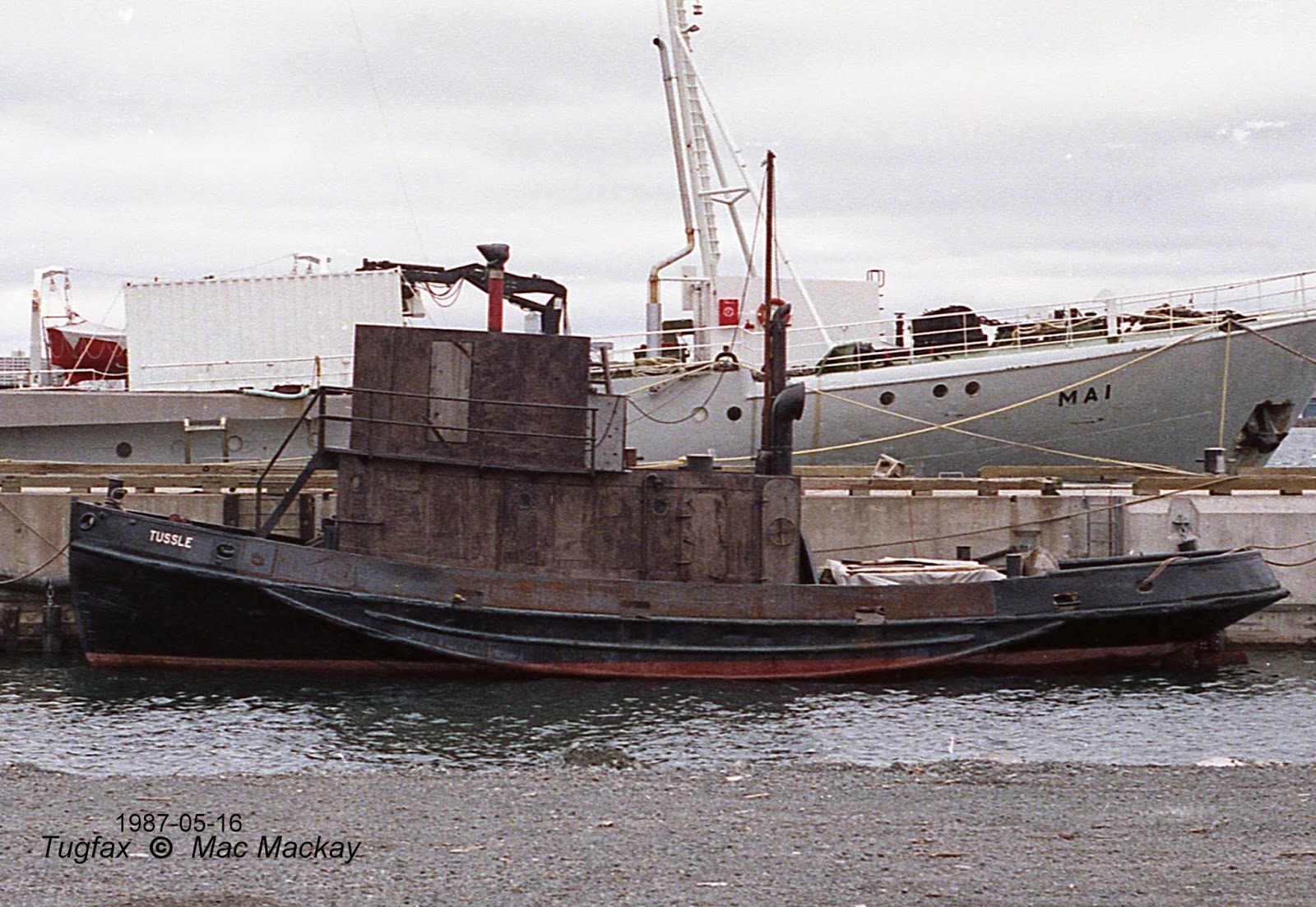 Finally in the water by 1987, at the IEL dock, its new home base, the tug was given the name Tussle.

The name Tussle was not original to this tug, - it had been used at least twice before for tugs in the Halifax area. The first, built in 1910 by Smith+Rhuland in Lunenburg, operated as passenger ferry on the La Have River until about 1920, then between Mulgrave and Arichat, and in the mid-1920s between Pictou, NS and Montague PE. In the 1930s it worked for Beacon Dredging Co and end up with J.P.Porter.
A second Tussle was Tanac V-248 which also worked for J.P.Porter from 1958 to 1965 when it was lost. It is likely that it was one of the other tugs completed as a fire boat, possibly stationed in Shelburne, NS.. 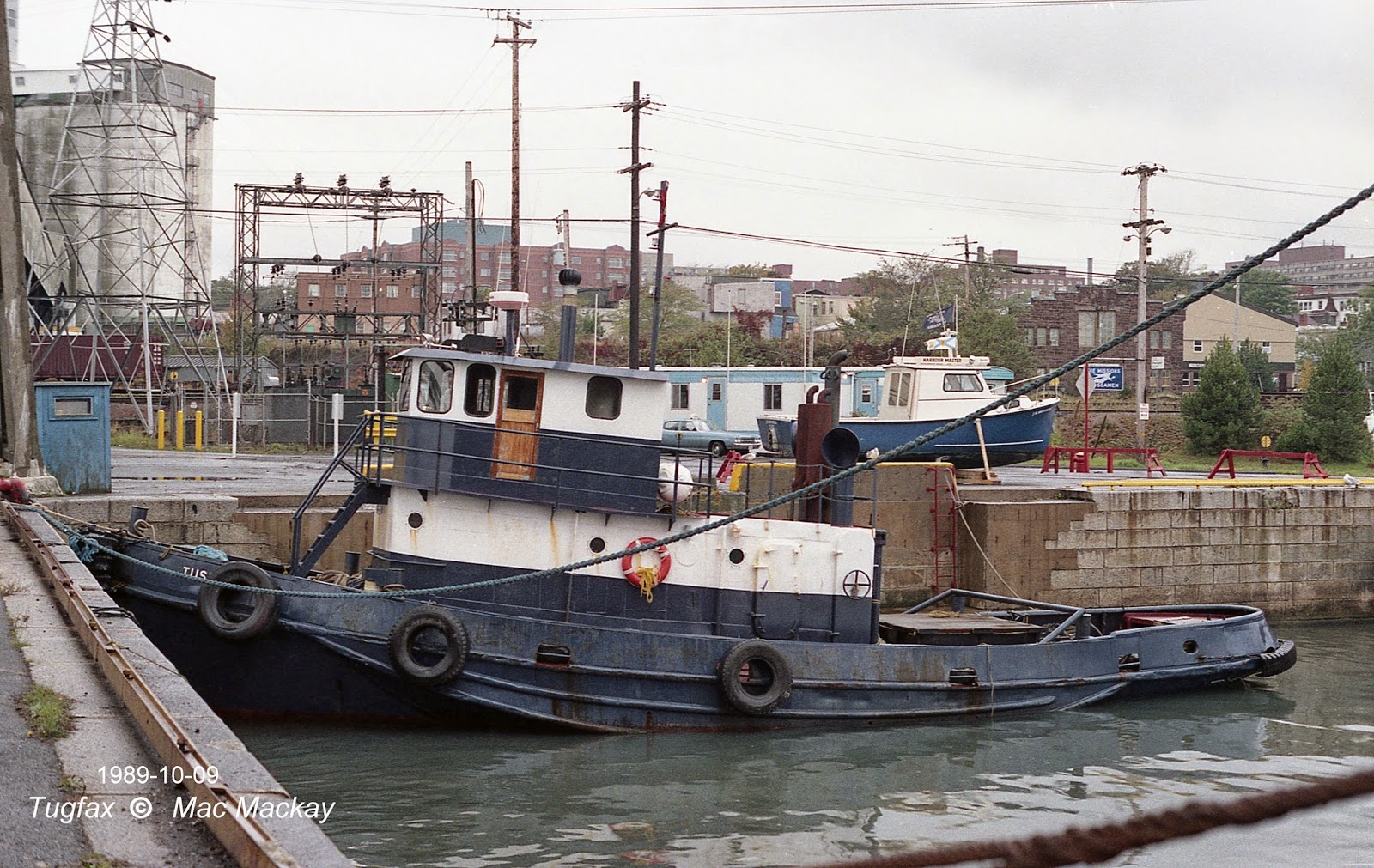 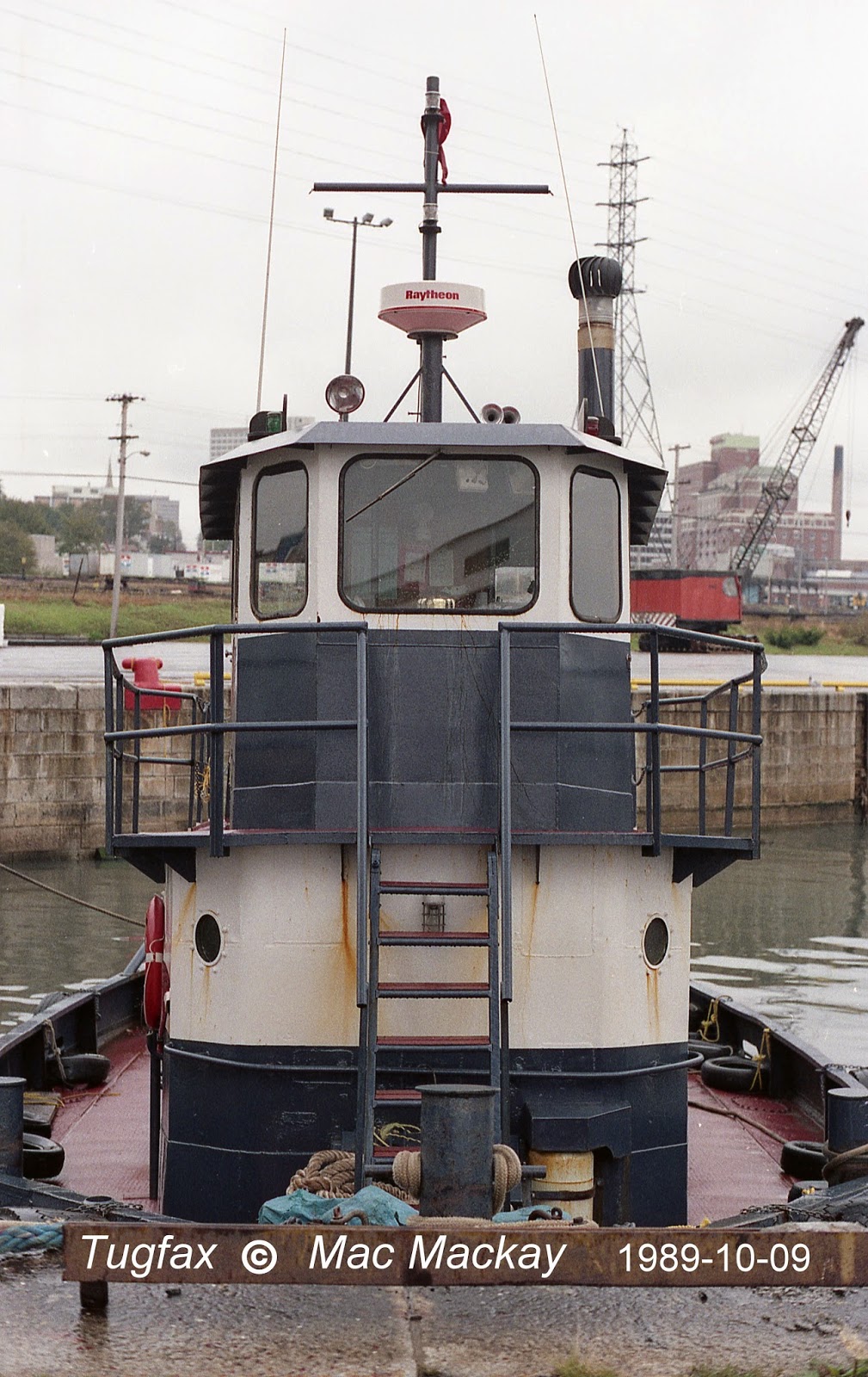 The completed Tussle was a handsome little tug, fully outfitted for towing. Save for its rudimentary exhaust pipe, it was well finished. 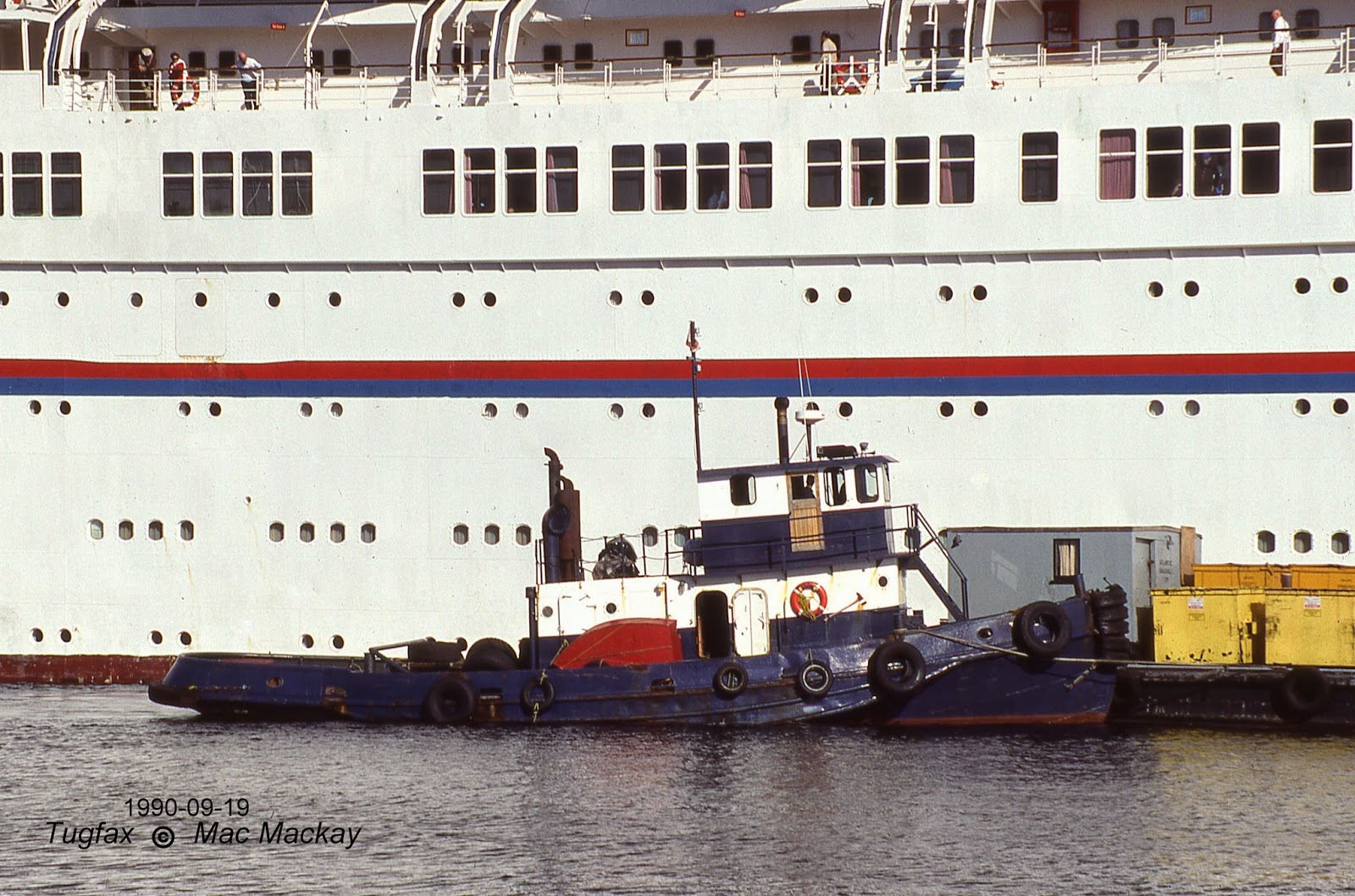 Tussle has a scows alongside the cruise ship Regent Star removing international garbage. Handling these scows was a large part of Tussle's work. 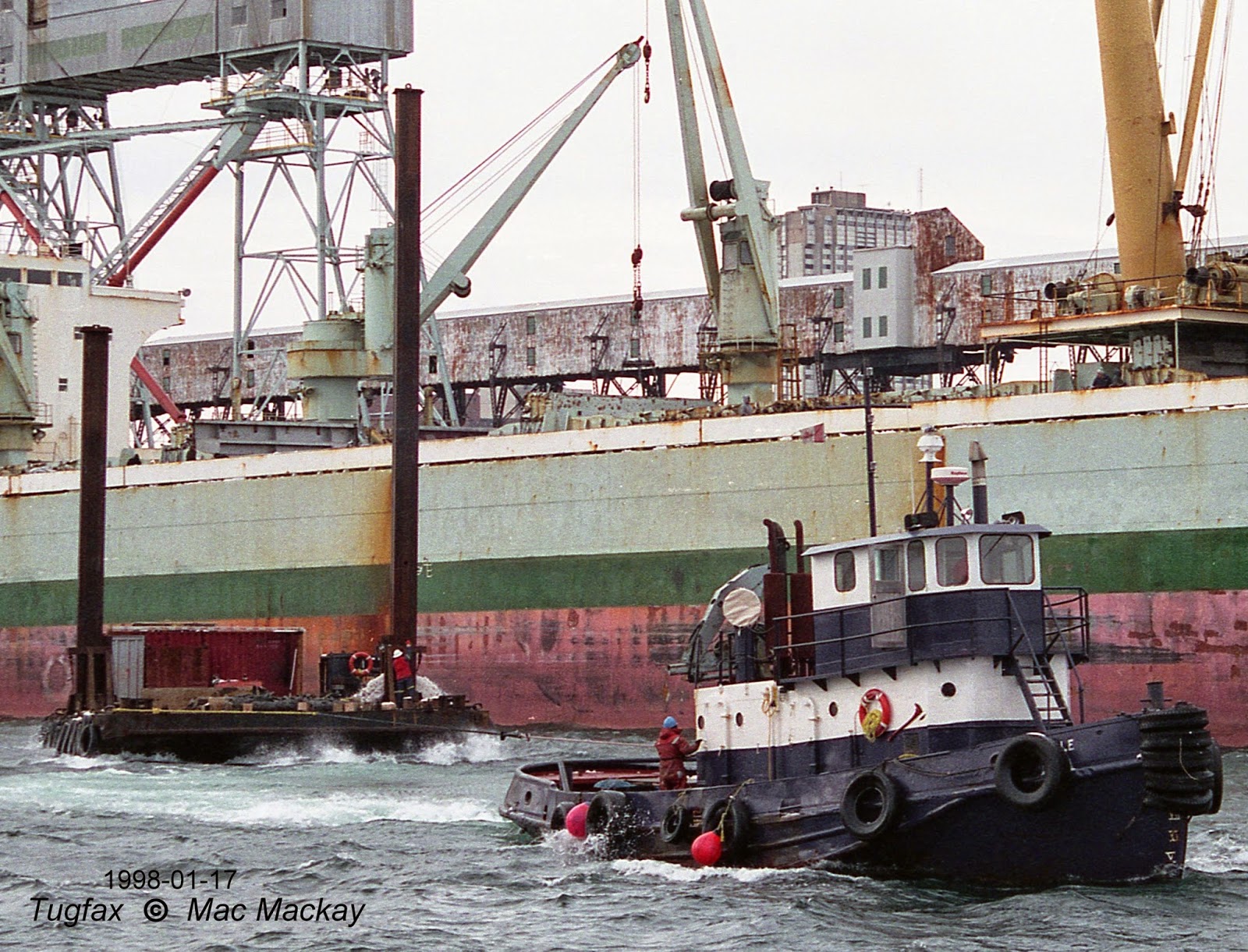 Tussle could handle heavy work too, towing barges and smaller ships around the harbour and along the coast.It was fitted with a knuckle boom hydraulic crane, mounted aft on its house. 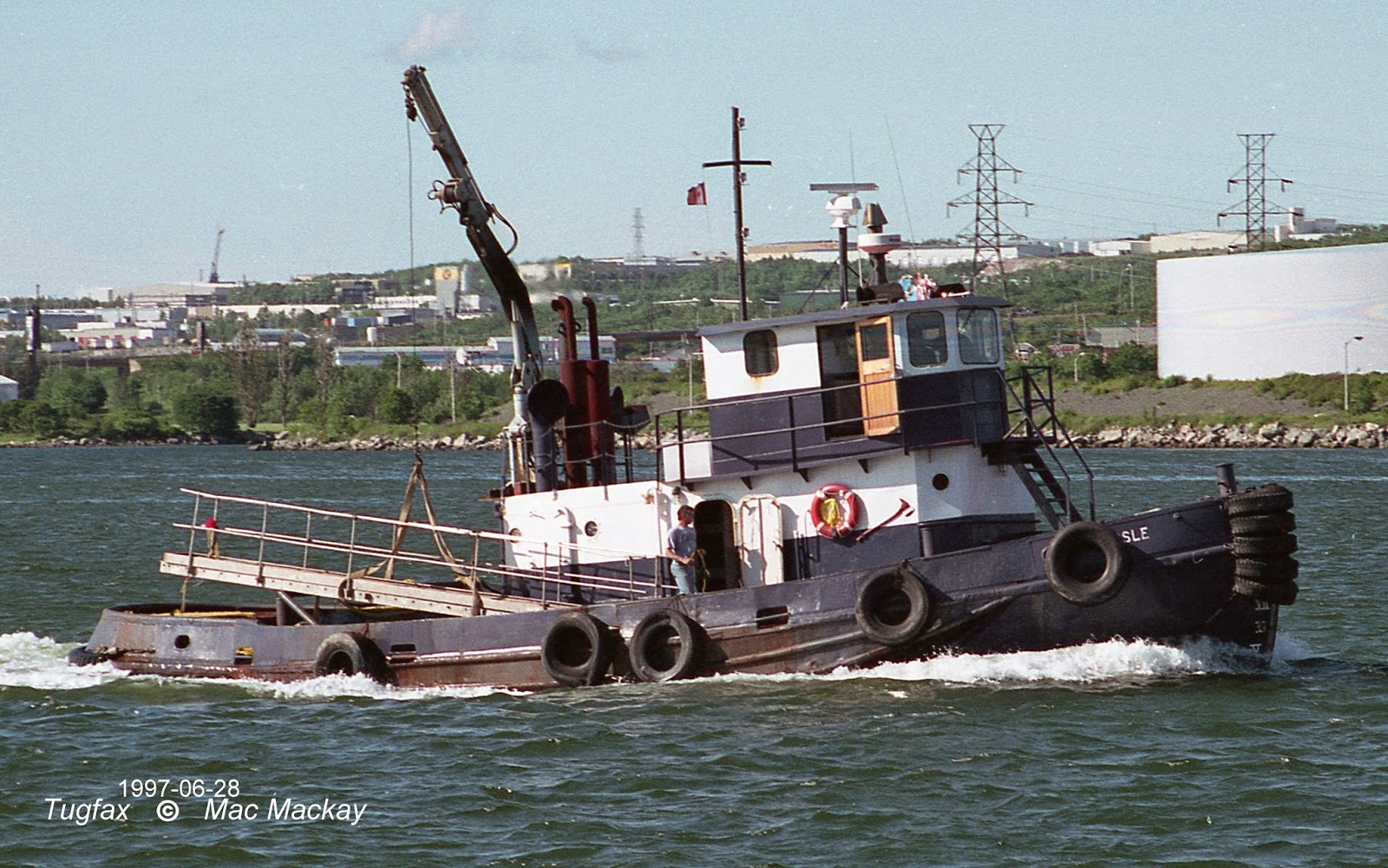 The tugs sponsoned hull meant wide side decks, providing lots of room for the crew to work, and to carry the odd load.


Tussle was not confined to Halifax harbour however. In 1990 it was sent  to Pugwash to provide berthing assistance to the barge Capt. Edward V. Smith (ex Adam  E.Cornelius) when it was handled by the tug Artcic Nanook or Magdalen Sea. It worked in Point Aconi on a construction project in 1991 and it towed a coastal freighter from Lunenburg to Halifax in 1994.

The tug worked steadily into the 2000s. Its Canadian registry was closed October 21, 2002 after it was sold south as MacKenzie Ryan. It was later Miss Christine and last heard of it was in Fort Lauderdale, FL, but US documentation expired in 2011. 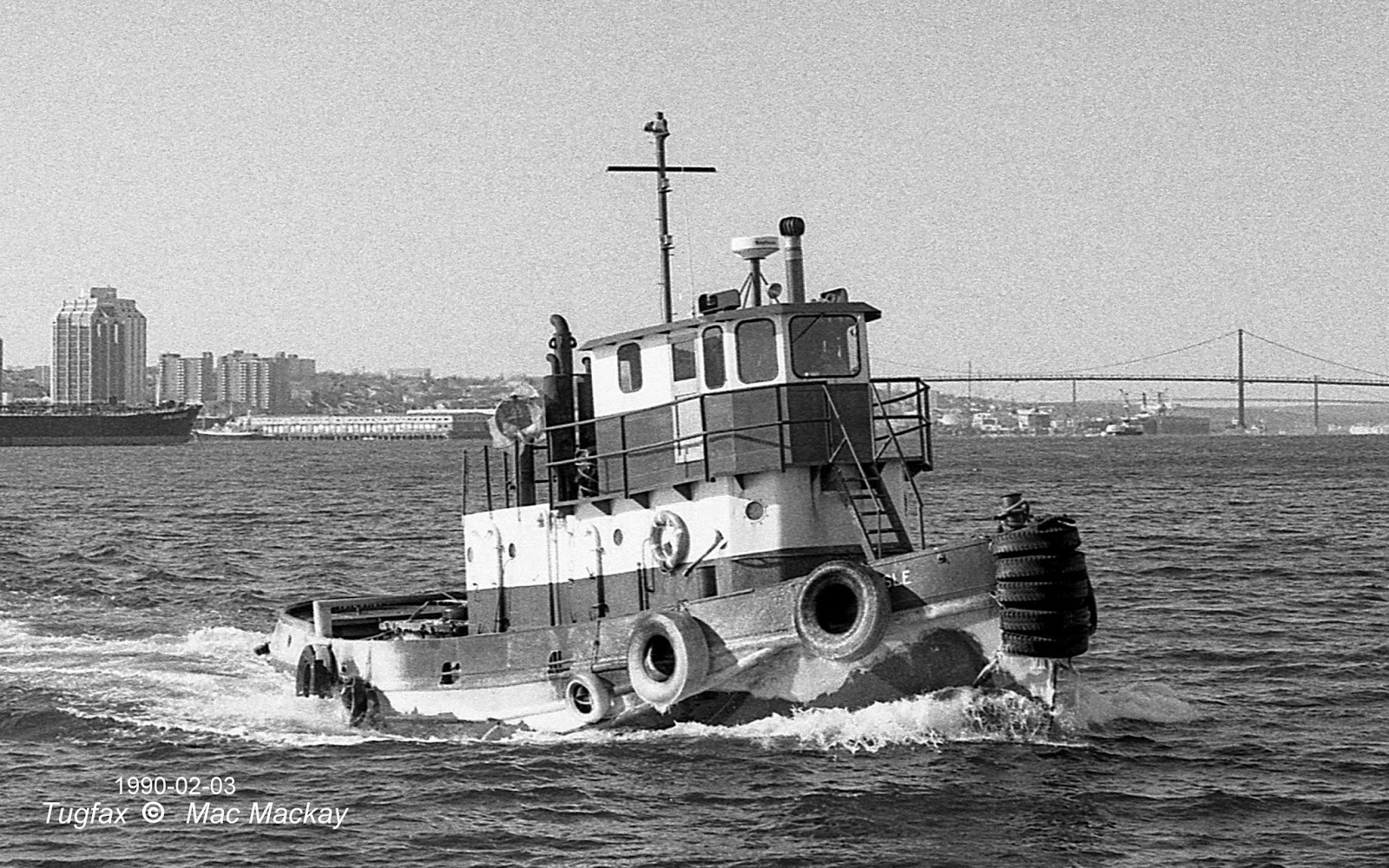 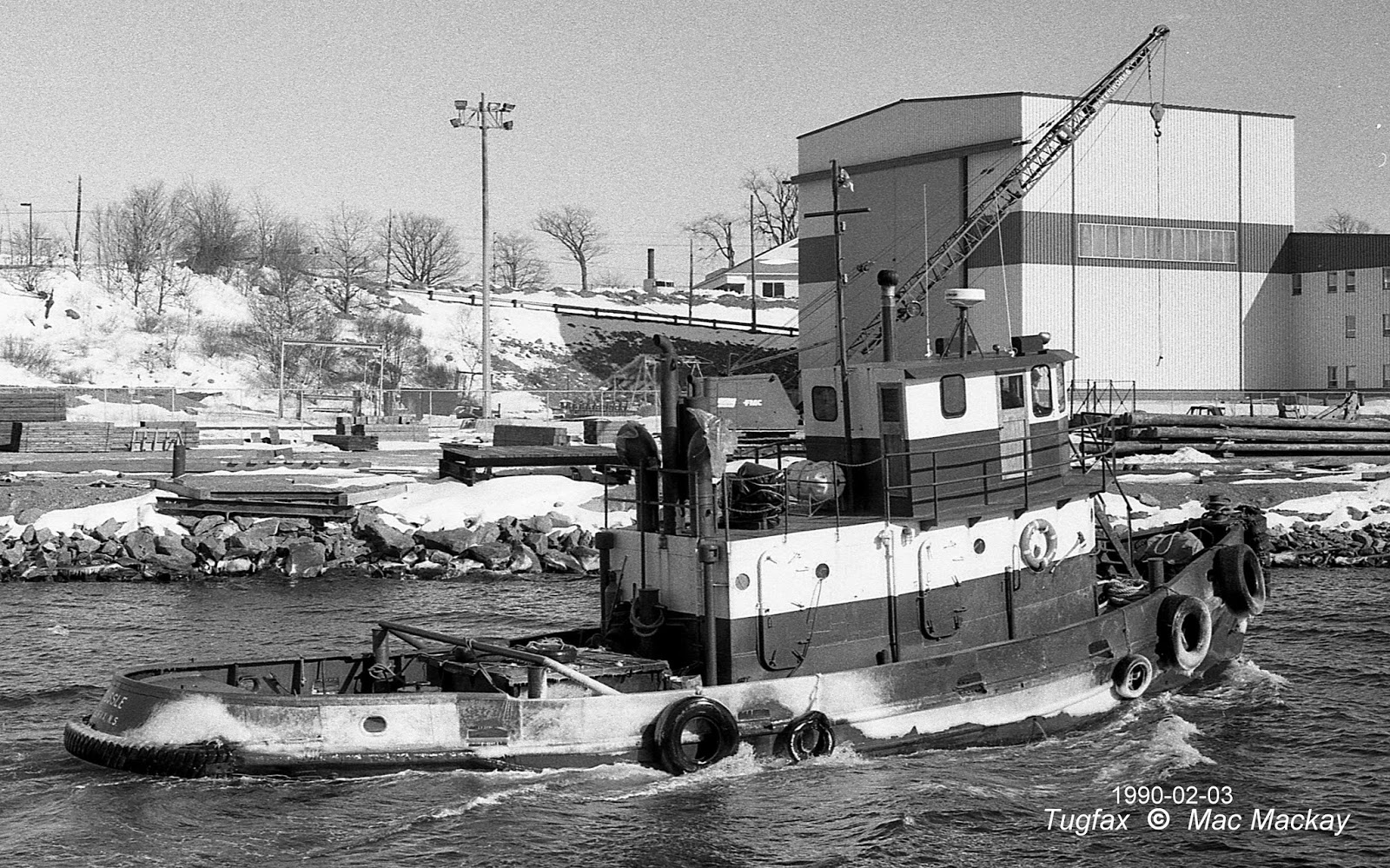 Tussle in its prime, returns to the IEL dock on an icy day in 1990.