The company Marinex (formerly Canadian Underwater Works)(C.U.W.) mentioned in my last post, had an interesting fleet of tugs, D.Robidoux was pictured in that post, the others are here in alphabetical order: 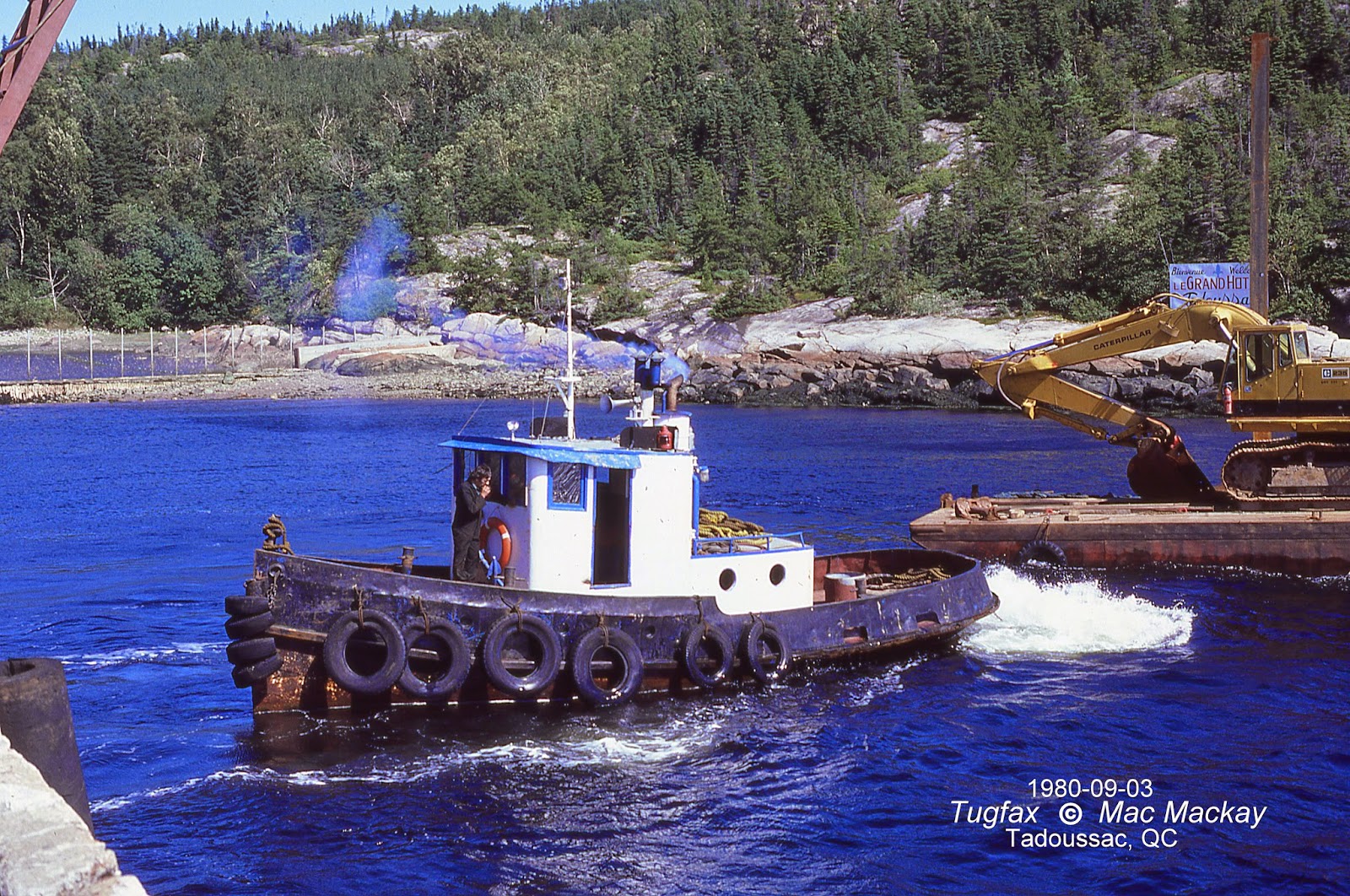 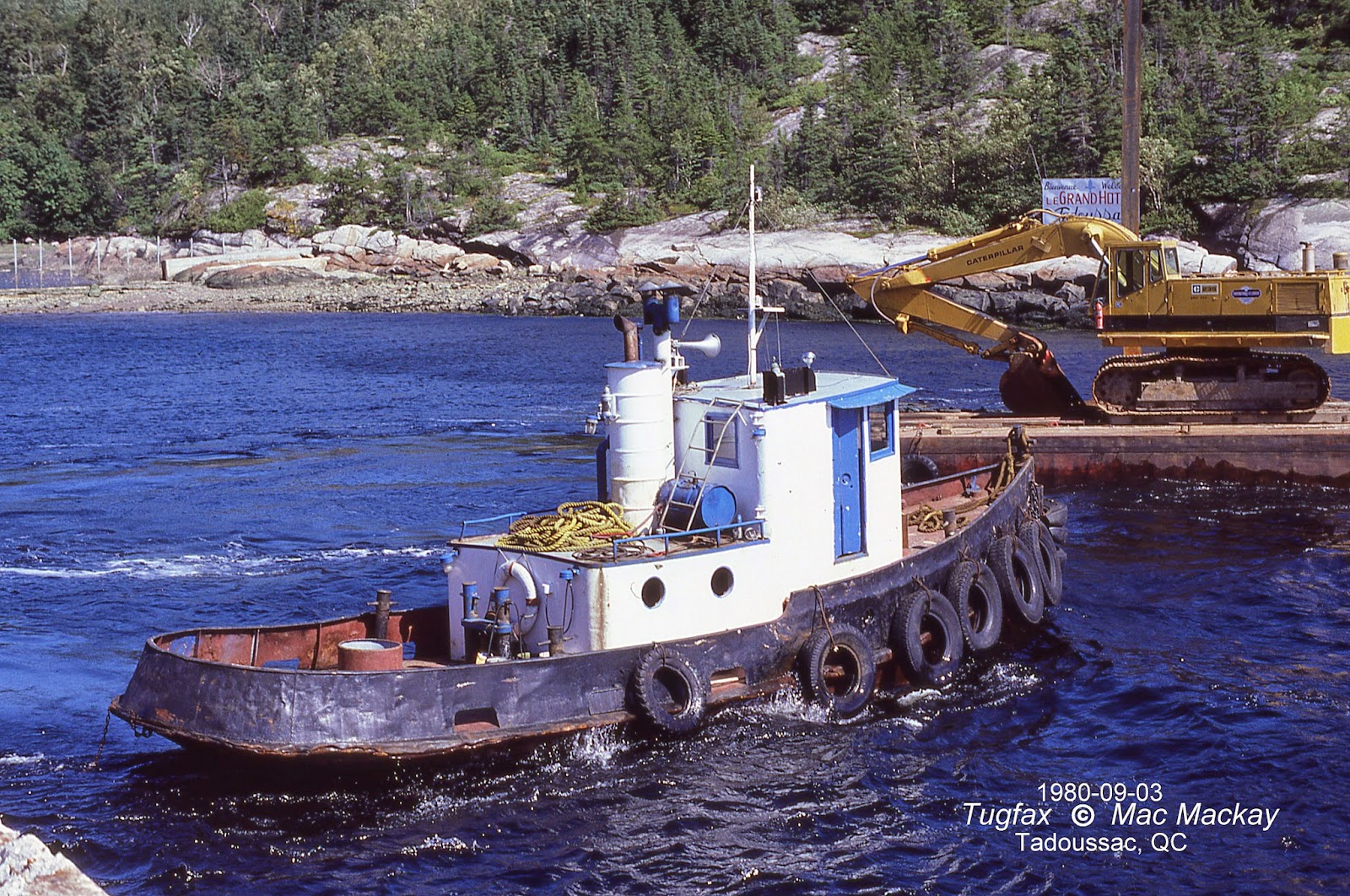 Pictured here working on a wharf project in Tadoussac, QC, Capitaine Lemay shows it stuff - with lots of smoke and noise. Built in 1952 by Gaston, Laurent and Raymond Lemay of Portneuf, QC, and measuring just under 15 grt its single screw was driven by a 205 bhp engine. The Lemays operated the tug for a number of years, and after Marinex ownership, it went to Pipe-Tec Specialité (2001) Inc of Ile-Bizard, QC. It is still carried on the Canadian Register, but I have not seen it for many years. 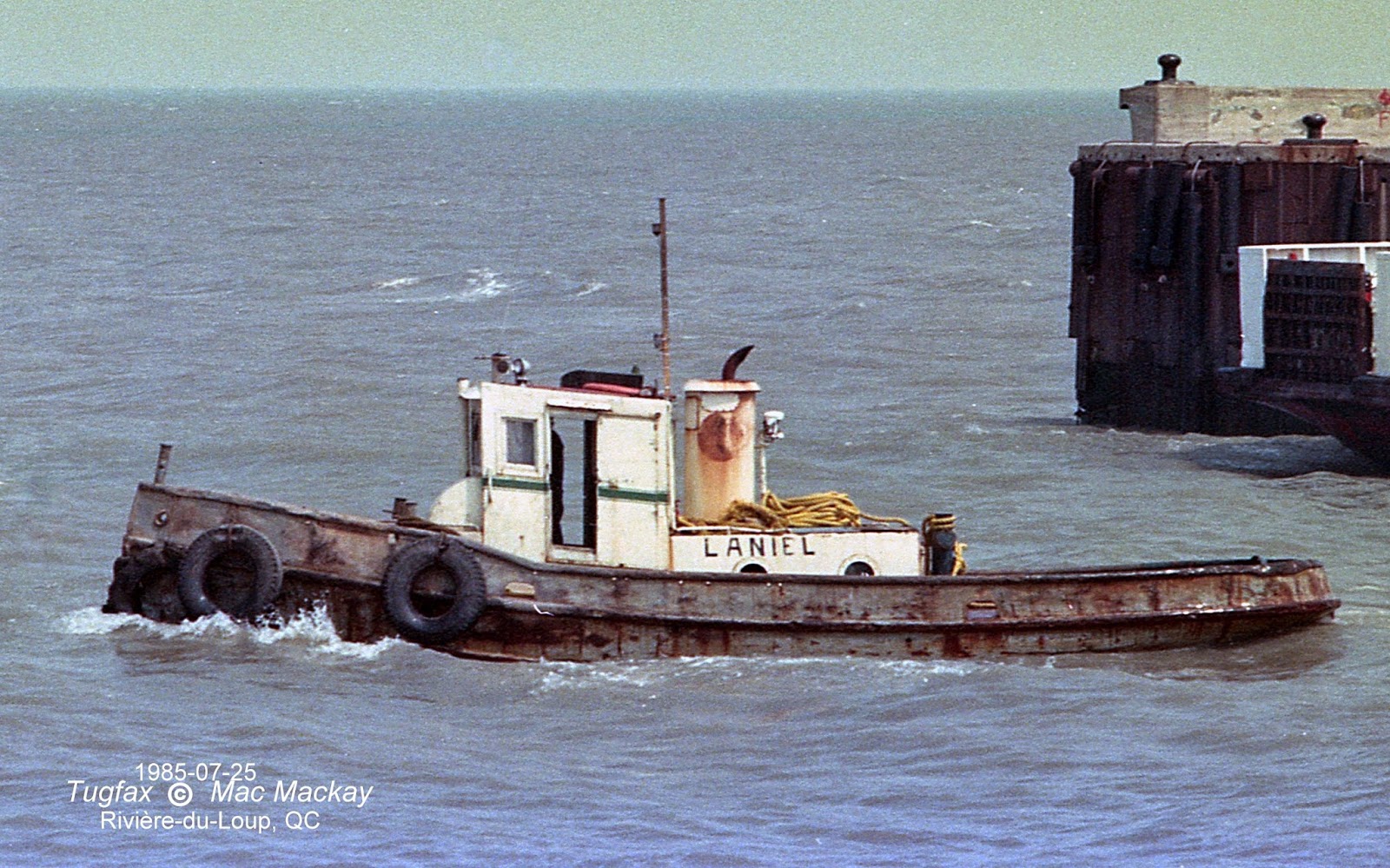 Laniel was built in 1955 by Ferguson Industries in Pictou, NS for the federal Department of Public Works to a fairly standard design. In 1966-67 it was sold through Crown Assets Disposal Corp for $7,400 to C.U.W. Post-Marinex it went to Entreprises Vibec Inc of Victoriaville, QC. I lost track of it after that, and I guess Transport Canada did too, for its registration was suspended March 27, 2003. That usually means its owners have gone out of business and the tug was abandoned somewhere.
It measured 11 grt and was rated at 225 bhp.
It is seen above working with the dredging plant at Rivière-du-Loup, an annual silt removal project that was tendered each year, Verreault had the contract for several years running, and Groupe Océan has the work now. 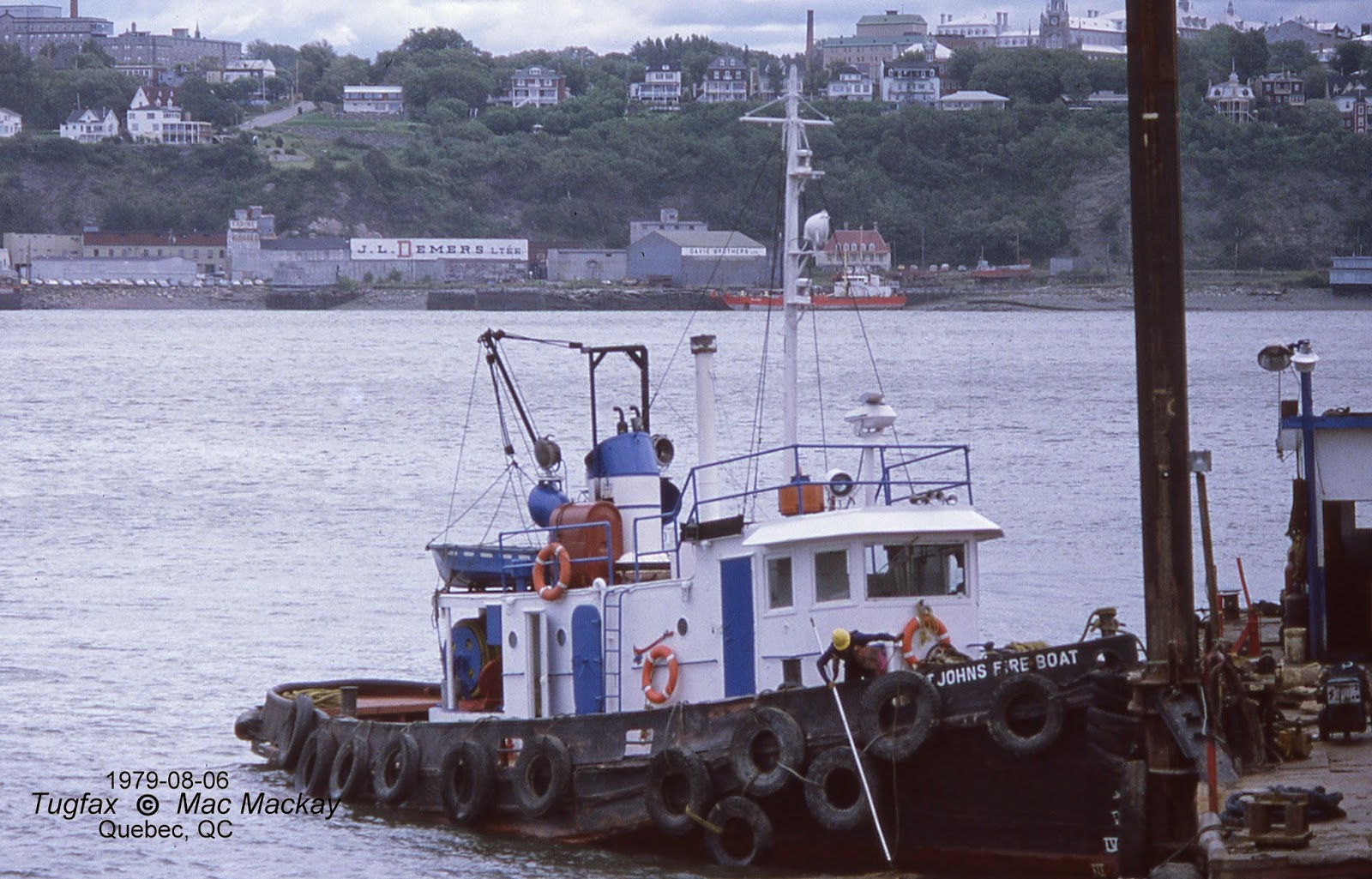 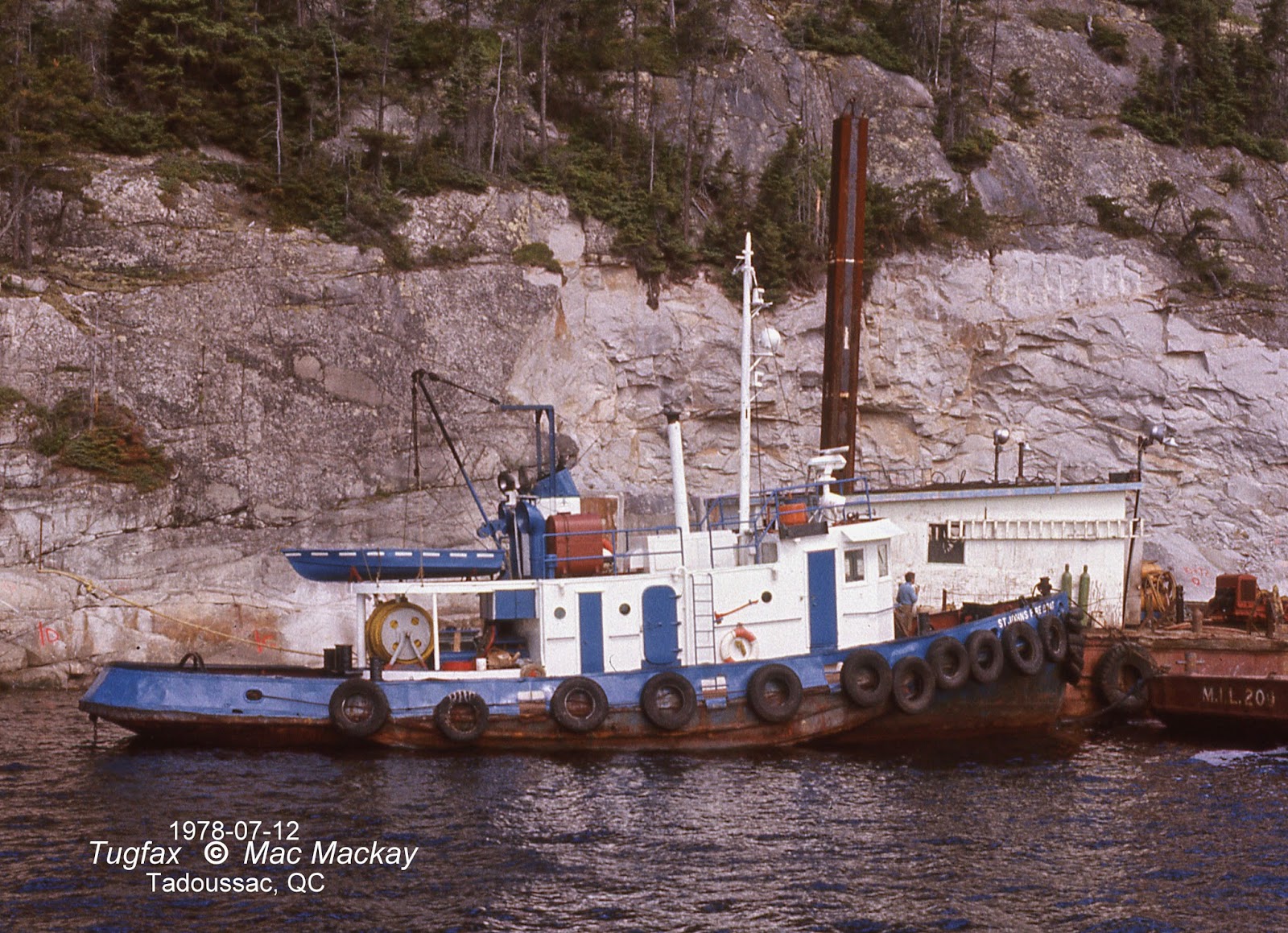 My favourite was St.John's Fire Boat. It was built by Central Bridge in Trenton, ON iin 1945 one of 250  steel TANAC class tugs for the British Ministry of War Transport for use in the Mediterranaean. Many were completed too late for the war and sold off instead. This tug was one of the last three built and was likely the last one, TANAC-V-250. The three were built with sponsoned hulls, wider than the standard and completed as fireboats for the Royal Canadian Navy. On completion they were unofficially named Naval Fire Tug No.1, No.2  and No.3. However they were also given names. No.1  was also known as FT-1 Fox, and based in Halifax.. No.2 may also have been based in Halifax. No.3 was based in Sydney, NS at the Point Edward Naval Station, In 1952 it was transferred to St.John's, NL and was to have been towed by Eastore, but ended up sailing on its own, escorted by the tug Riverton.
At some point it was transferred to the federal Minister of Public Works, and registered as St. John's Fire Boat. 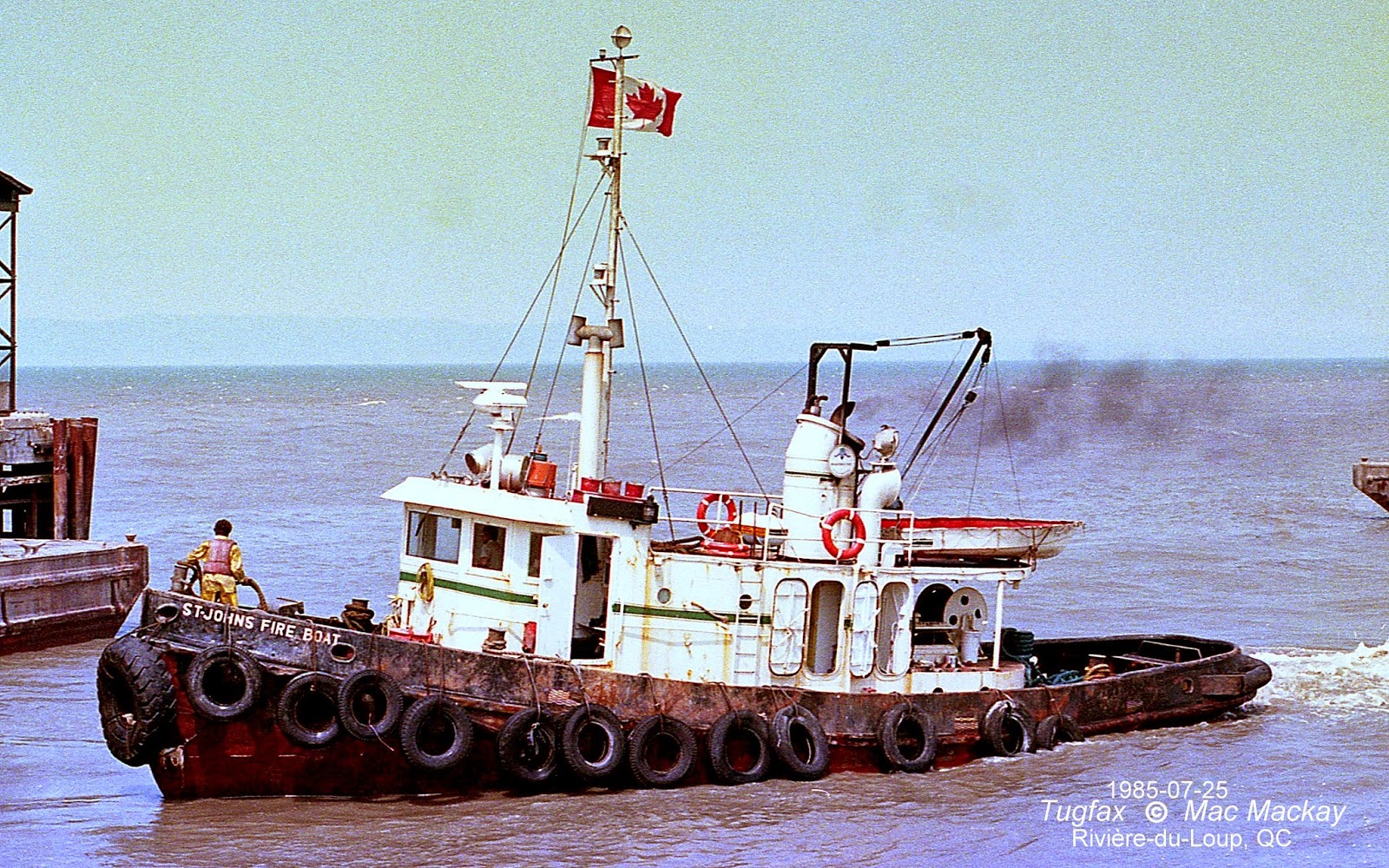 C.U.W. bought the tug in 1970 for $12,000 and it remained in the fleet when they became Marinex in 1972.
In 1990 I saw it hauled out on the shore at Cap-de-la-Madeleine, and there was work going on around its stern. However by 1993 work had long been suspended, it was boarded up and derelict. It register was closed March 23, 1995, and I assume it was broken up where it lay. (The pictures are too sad to post)

My favourite photo: when it was working with the dredge at Riviére-du-Loup. Notice the deck hand on scow, calmly sitting on a bollard while his colleagues on the tug get a thorough shake up. 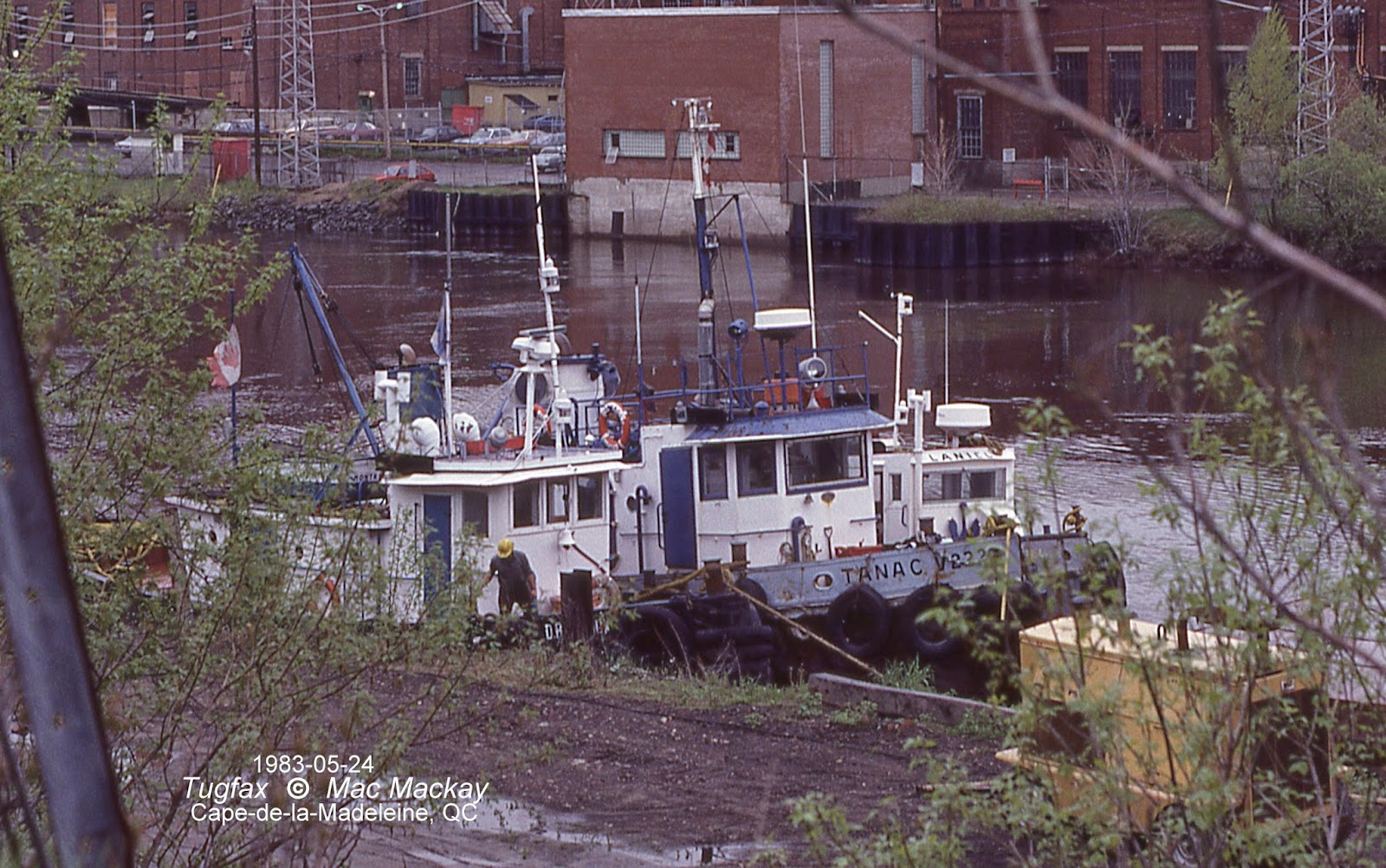 Tanac-V-222 also came from Central Bridge in Trenton, ON. The first 178 TANACs were sent overseas for the Minister of War Transport and found their way to the UK, Mediterranean and even Singapore. The remainder were sold following the end of the war in 1946-47. Those numbered after 200 were given the initial "V", some say because they had Vivian engines. I have never believed this, preferring to hope that the "V" stood for Victory. V-222 was built with the conventional hull, measured 50 grt and had the 375 bhp Vivian main engine.
It was also transferred on completion to the federal Minister of Public Works and worked in the old St.Lawrence canals, before the opening of the St.Lawrence Seaway. It was sold through Crown Assets to L.Wagner + Sons Inc of Giffard QC in 1972 for $12,000 and they renamed her Willa P. She soon went to Marinex and reverted to its original name. By then its horsepwer was listed as 290 bhp.
For the past several years it has been listed as pleasure craft owned in Port-aux-Basques, NL.

I believe Marinex may have had at least one small Russel-built winder boat, but I have no record of its name. It may not have been registered due to its size.