Up the Creek, but with a paddle

From the oldies department :

Summer trips through Quebec in the 1980s turned up a number of old tugs, many no longer in service.
A company called Marinex (formerly Canadian Underwater Works) operated a dredging and marine construction operation out of Cap-de-la-Madeleine, QC, based was on the easternmost of the three branches of the St-Maurice River that exits into the St.Lawrence at Trois-Rivières.
Hauled out on the shore alongside the base was the old tug D.Robidoux, obviously retired from service. It dated from 1912 when it was built in Sorel, and been named Denise S.

The Marinex base.Tugs Capitaine Lemay, St.John's Fireboat and Tanac-V-222, and the barge Nanook, a former CCG landing craft, tied up to a variety of barges and dredges. 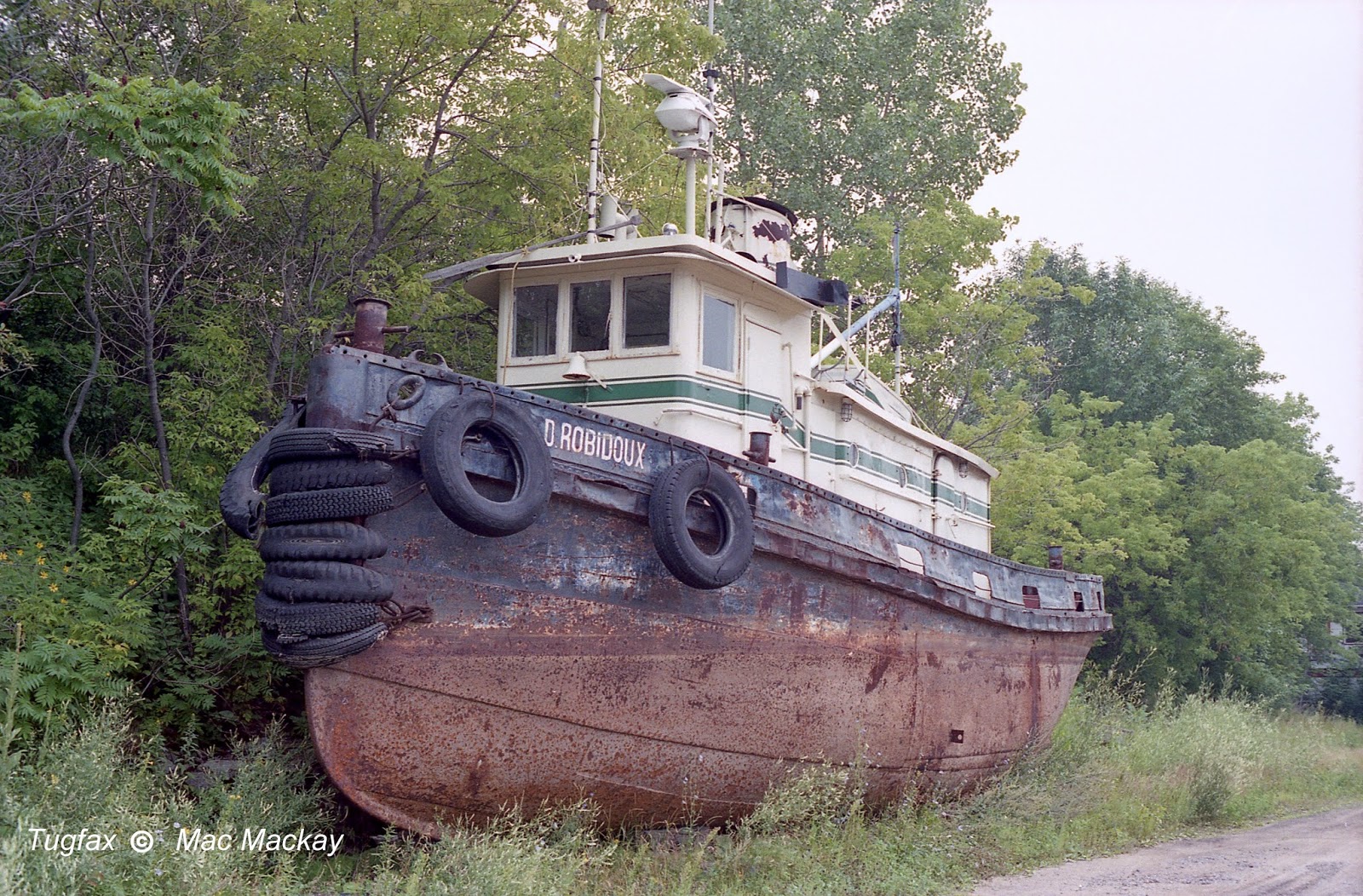 D.Robidoux on the bank of the river. Inexplicably there is a paddle tied off above the visor on the wheelhouse.

In Louiseville, QC, there was a significant collection of old tugs, dredges and barges waiting to be scrapped for years.

Leading the line up of old tugs was Capt. T.W.Morrison, followed by Jean Simard and Glenvalley 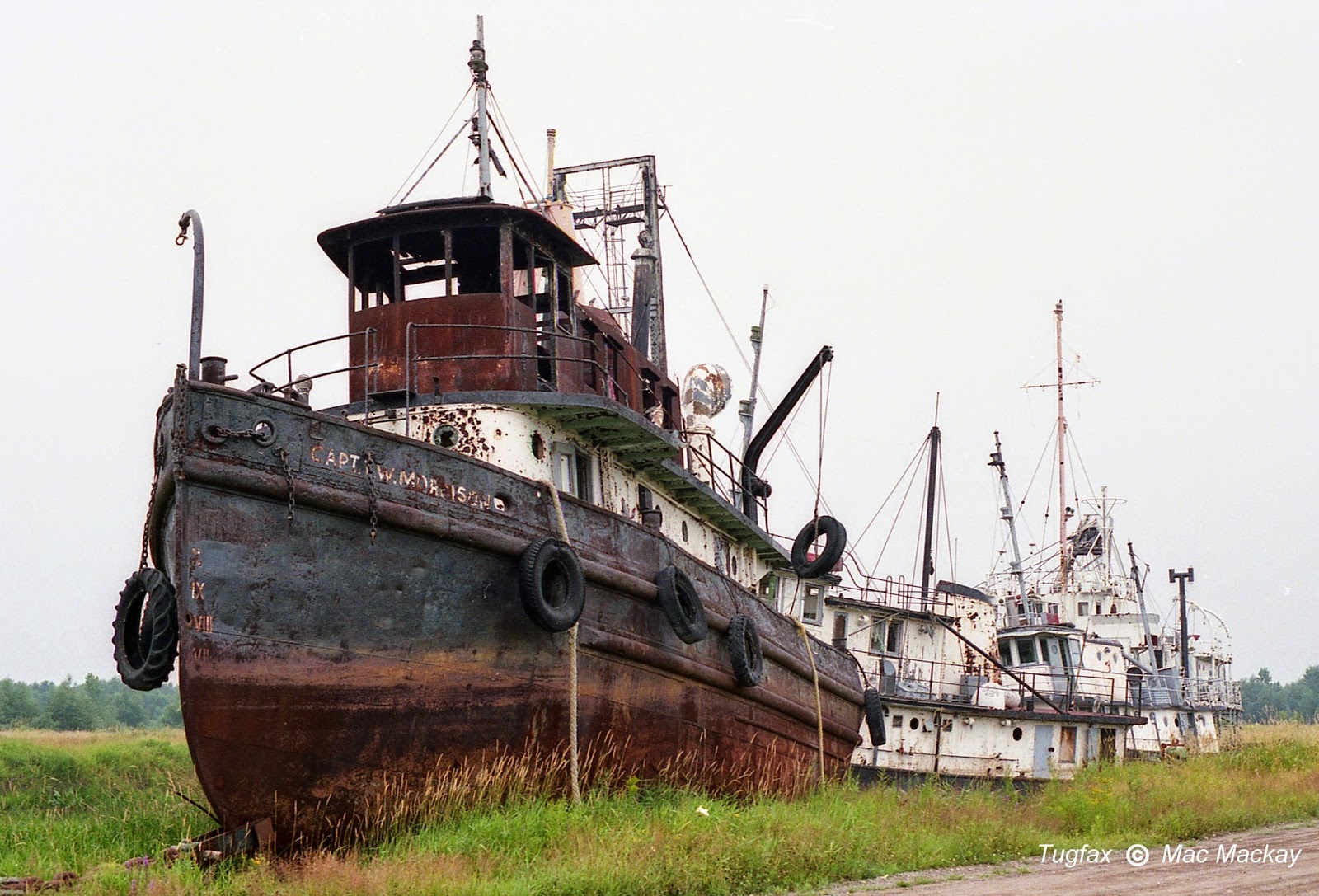 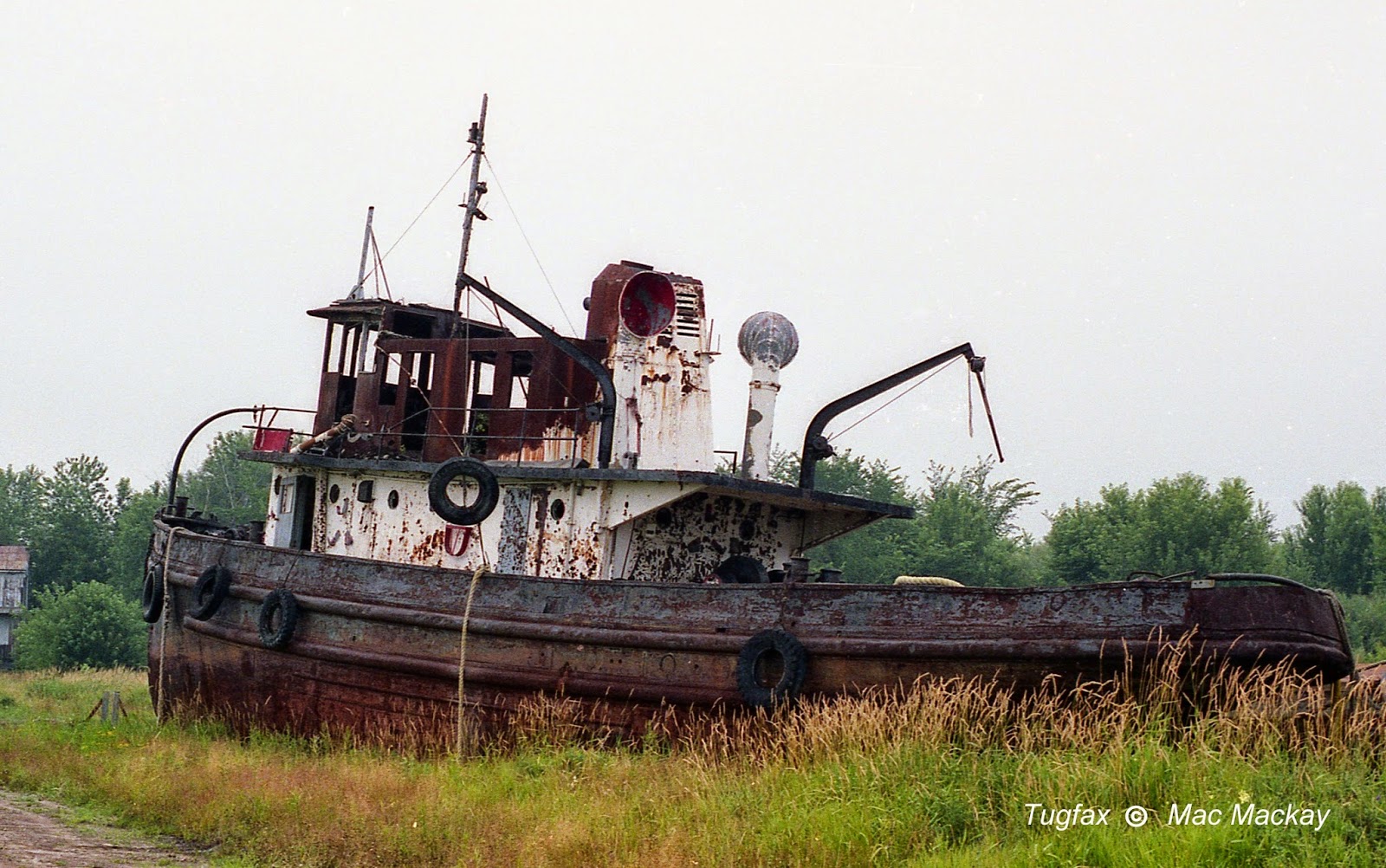 Capt. T.W.Morrison dated from 1907 and the yard of Pusey and Jones in Wilmington, DE where it was built for the US Army's Quartermaster Dept. In 1923 National Dredge+Dock Co of Quebec bought the tug and in 1939 it went to Marine Industries Ltd of Sorel. They converted it to diesel in 1957 with two V-12 GMs, totaling 590 bhp. Richelieu Dredging acquired the tug in 1972 and in 1976 it was sold to Paul-Émile Caron of Louiseville for scrap. During its entire career the tug maintained its original US military name. However it was not until 1996 that scrapping actually took place. By then the ravages of time had taken their toll. 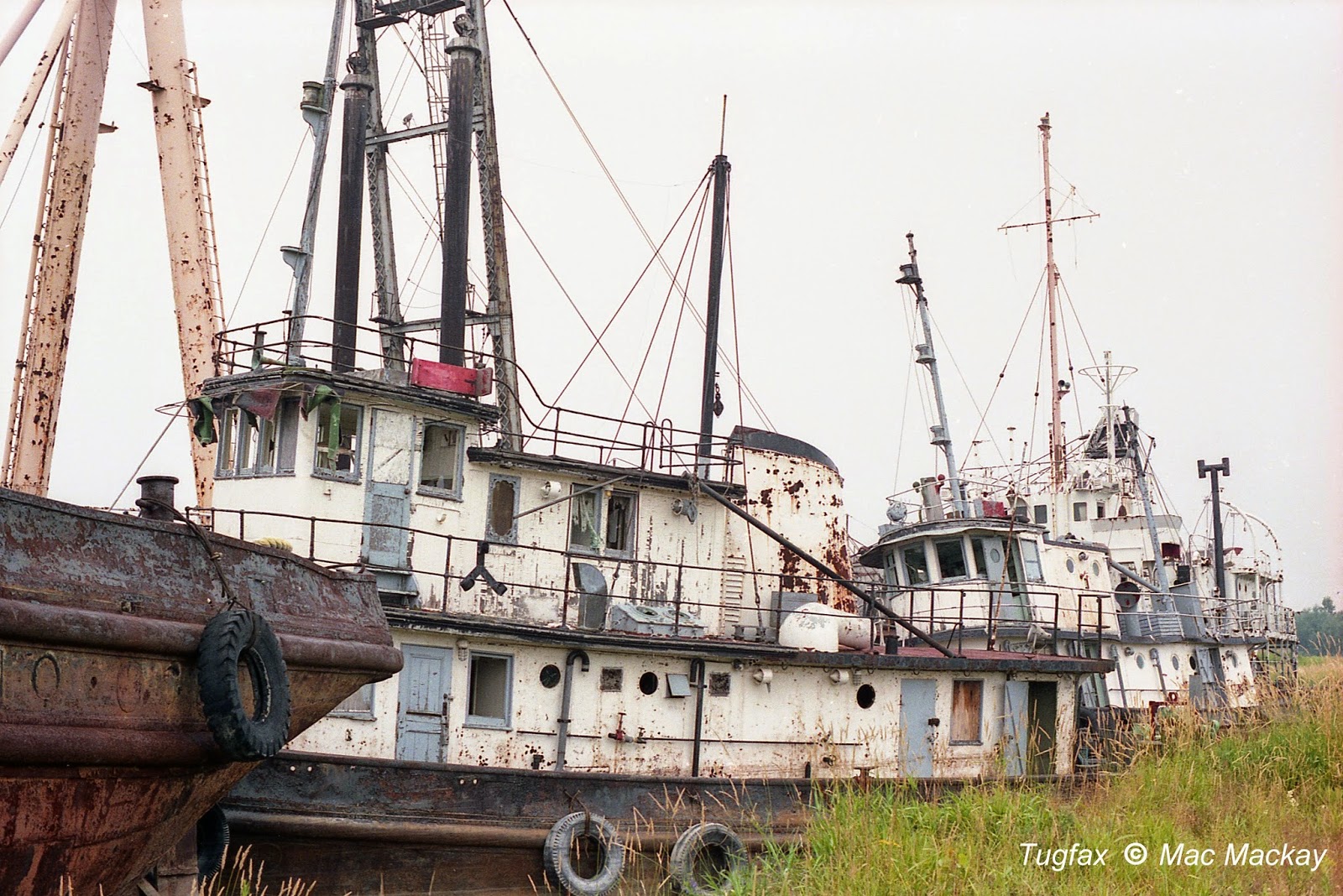 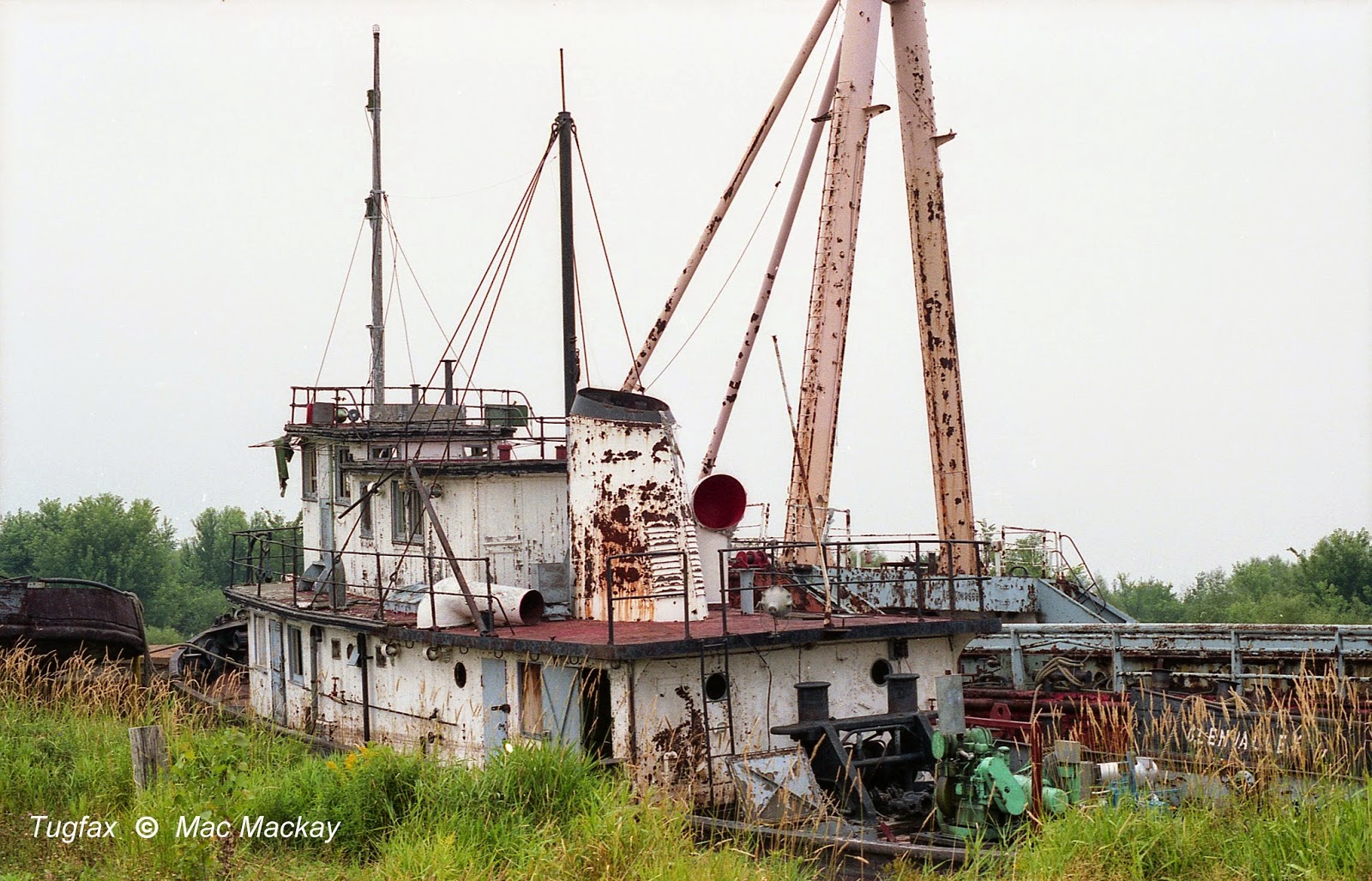 Jean Simard dated from 1914 when it was built by the Canadian Government Shipyard in Sorel, QC for the Minister of Marine. A that time the Ministry, precursor of the Department of Transport, maintained the navigation channels in the St.Lawrence with a large dredging fleet, including tugs. Carrying the name Deschaillons until 1960. When acquired by Marine Industries Ltd they renamed it after a member of the owners' family. It was built with twin screws, 450 shp and a 1200 gpm Merryweather pump, which could be used for firefighting, but was also employed for washing down dredges and scows.
MIL installed a 680 bhp diesel engine, and it also moved through Richelieu Dredging ownership in 1972 to P-E Caron in 1976 and was finally scrapped in 1996. 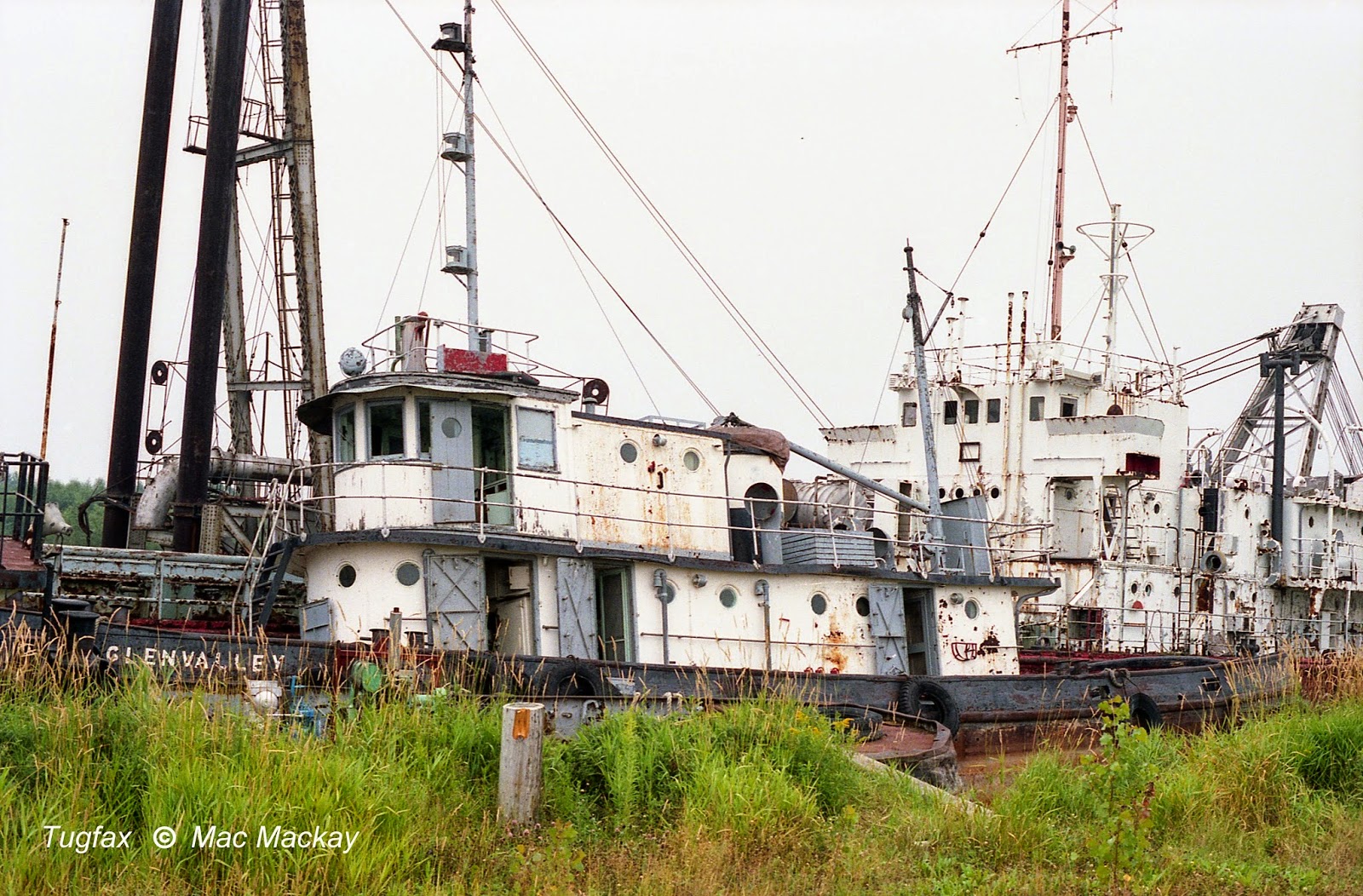 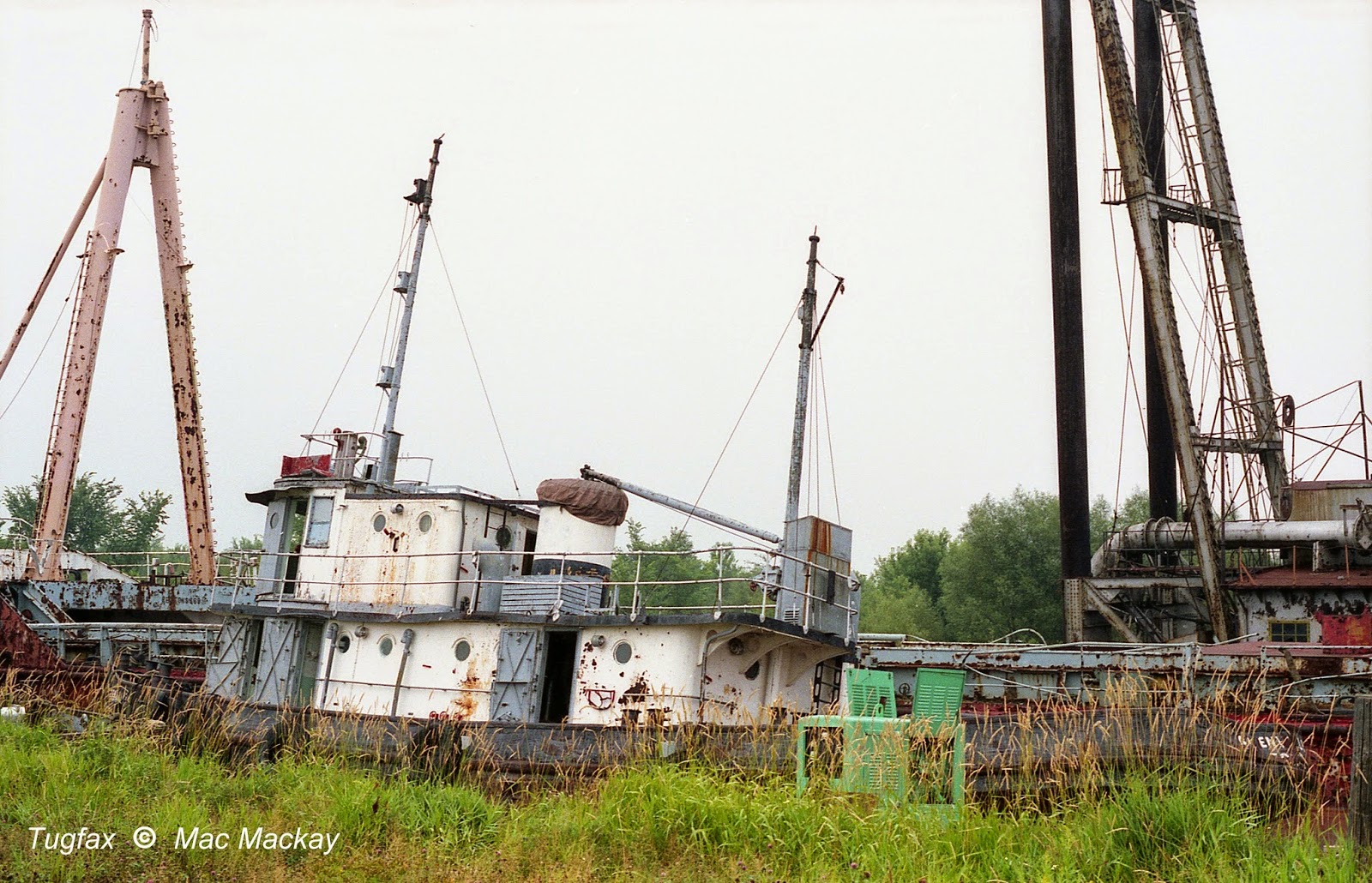 Glenvalley came from the Canadian Dredge+Dock shipyard in Kingston, ON in 1945 as one of the many Glen class tugs built for the Royal Canadian Navy. Almost immediately declared surplus, it was sold to MIL in 1946. From its layup in Shelburne, NS it sailed in May 1946 for Sorel, but made at least one more trip back for a surplus scrap tow to Sorel. Its original 400 bhp Enterprise engine may have served it to the end. It followed the path of its fleetmates tugs through Richelieu to Caron. A plan to sink it as a dive site fell through and it was broken up in 1996. 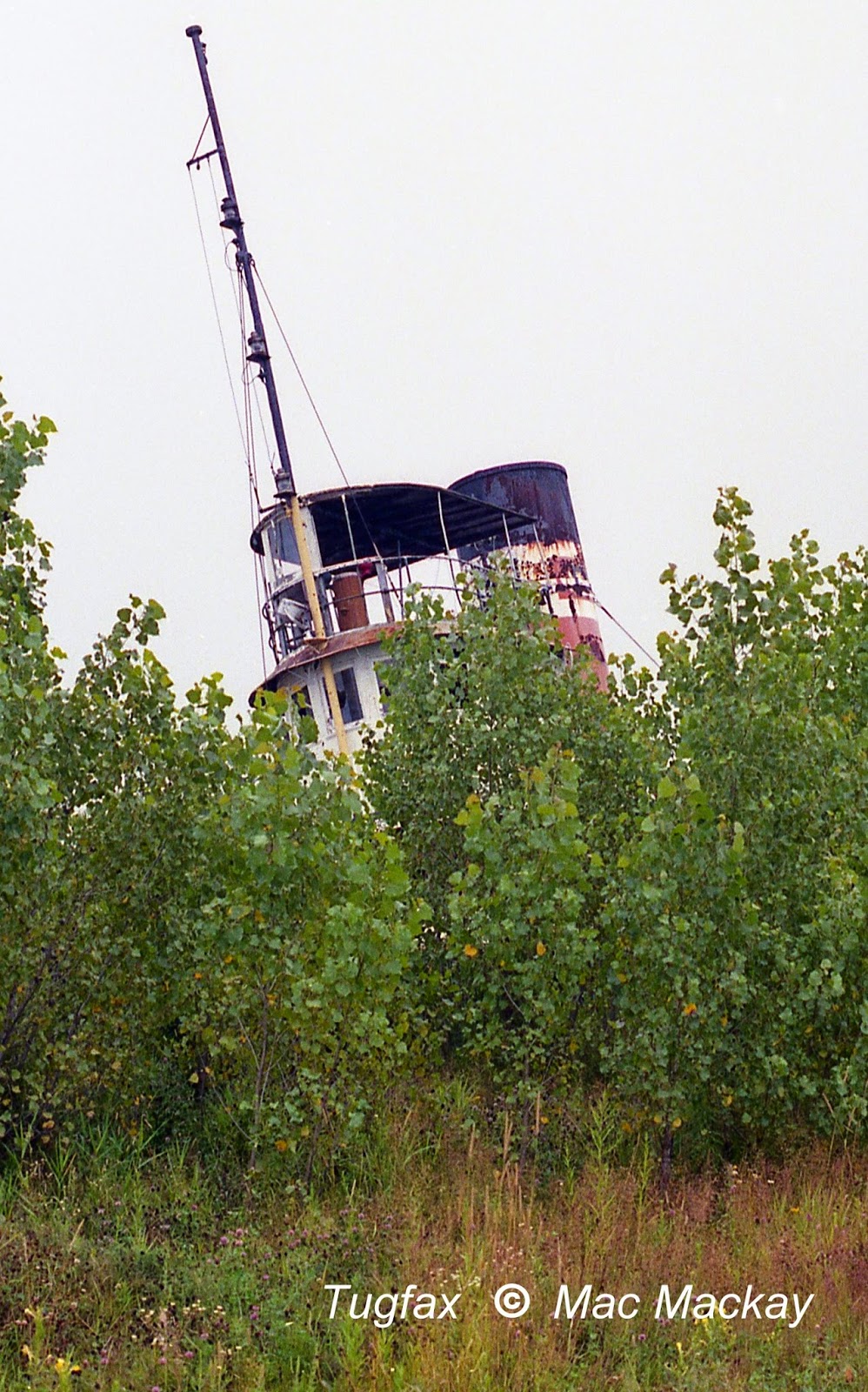 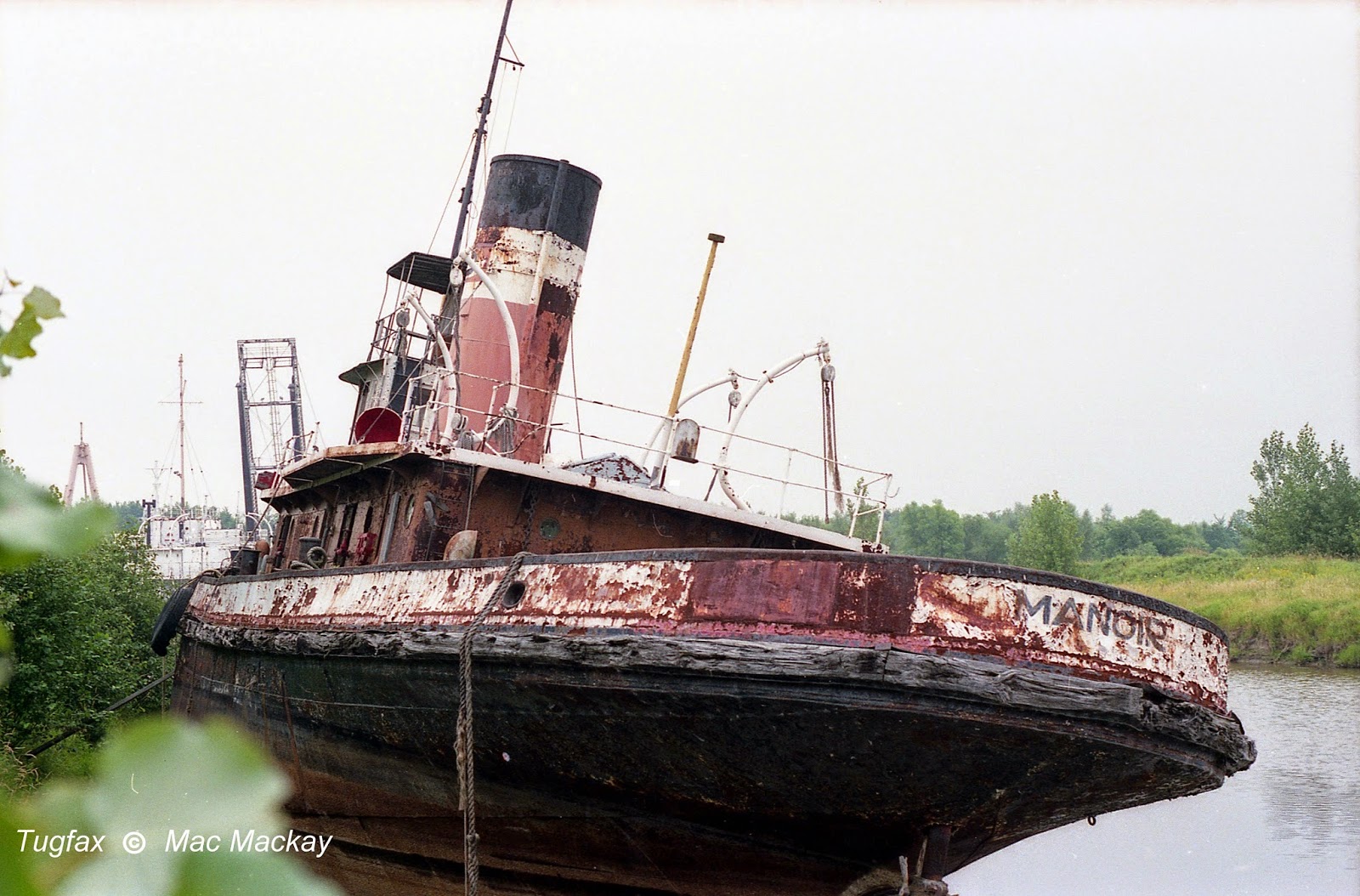 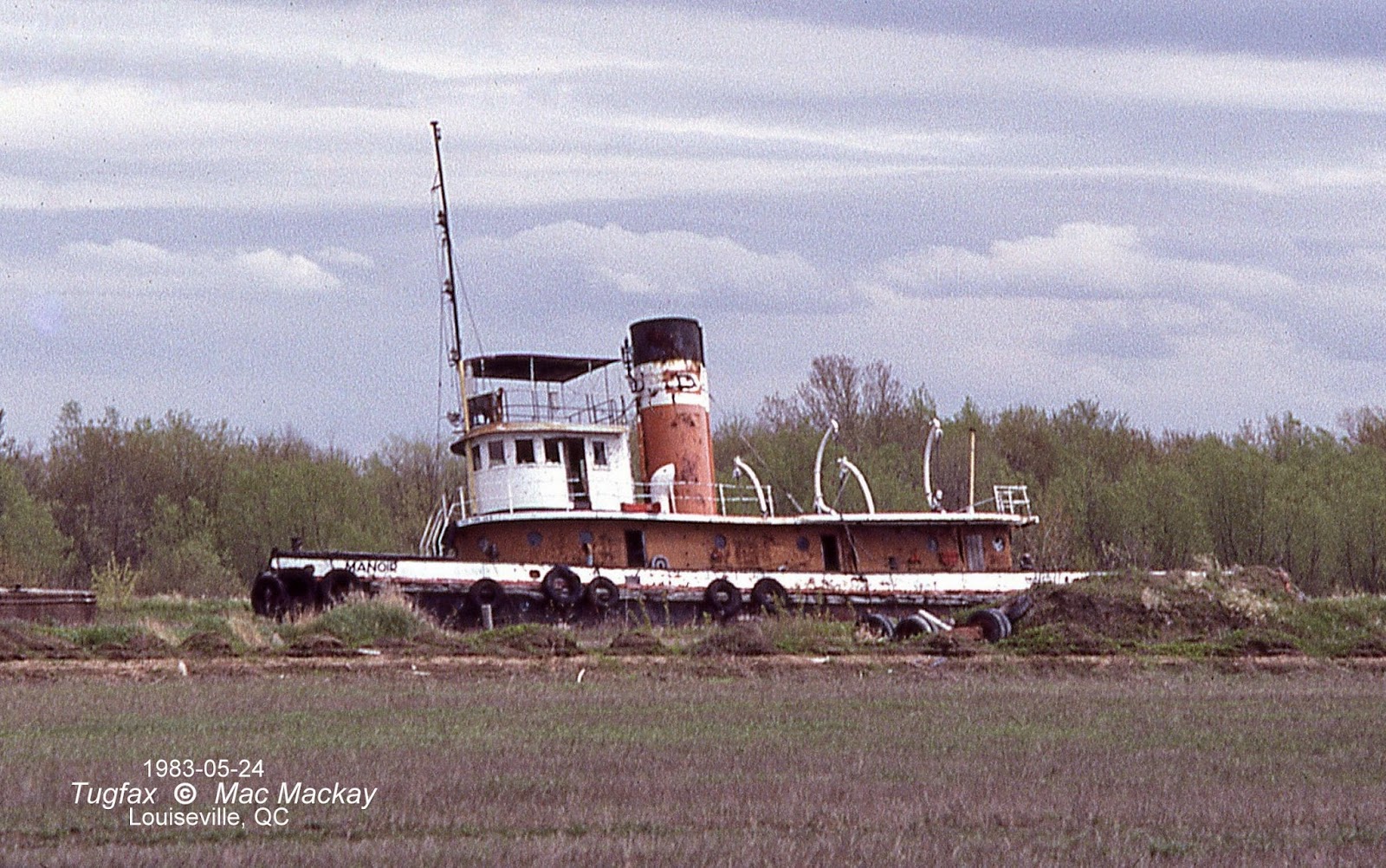 A fourth tug, further down the line, had a very different background. Manoir was laid down in November 1929 and launched the following spring by Davie Shipbuilding+Repairing Co Ltd in Lauzon, QC to its own account. Powered by an 800 ihp steam plant by Aitchison+Blair, it was put to work in Quebec City as a ship berthing tug. Canada Steamship Lines owned the shipyard, and in later years the tug carried the CSL funnel colours with the Davie logo superimposed. On April 10, 1976 the tug sank at Lauzon. It was raised but never repaired and was towed to Louiseville in July 1976. It was also not broken up until 1996. It was one of very few tugs in eastern Canada to employ an open monkey island.