While waiting for the German tug Janus to begin its tow of the crippled tanker Australian Spirit, another tow passed by. This was the Canadian Naval Auxiliary tug Listerville with a work raft. 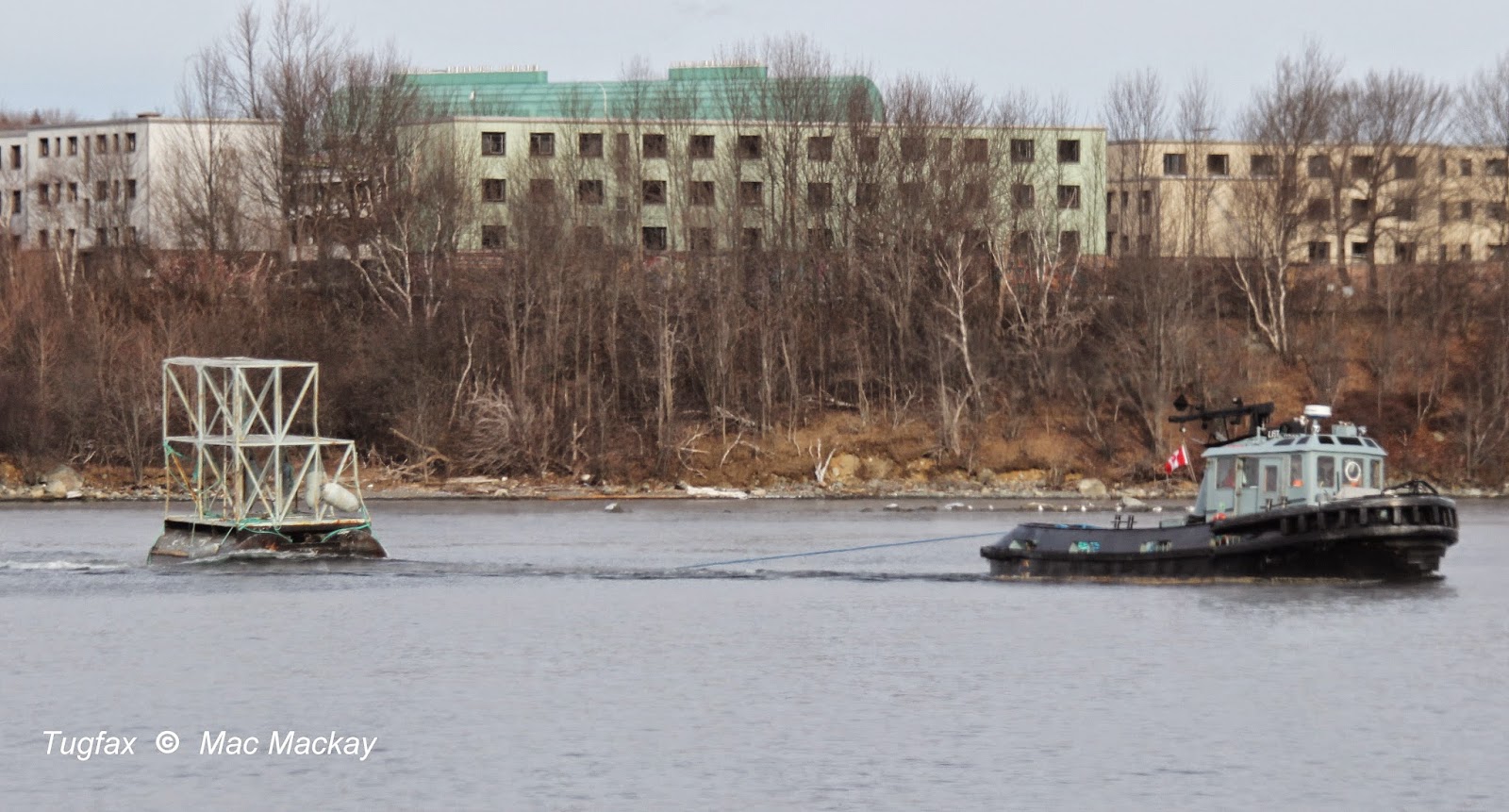 The raft had blown out of the dockyard during high winds and grounded on Turple Head, a spit of land just beneath and south of the MacKay bridge on the Dartmouth side of the harbour. 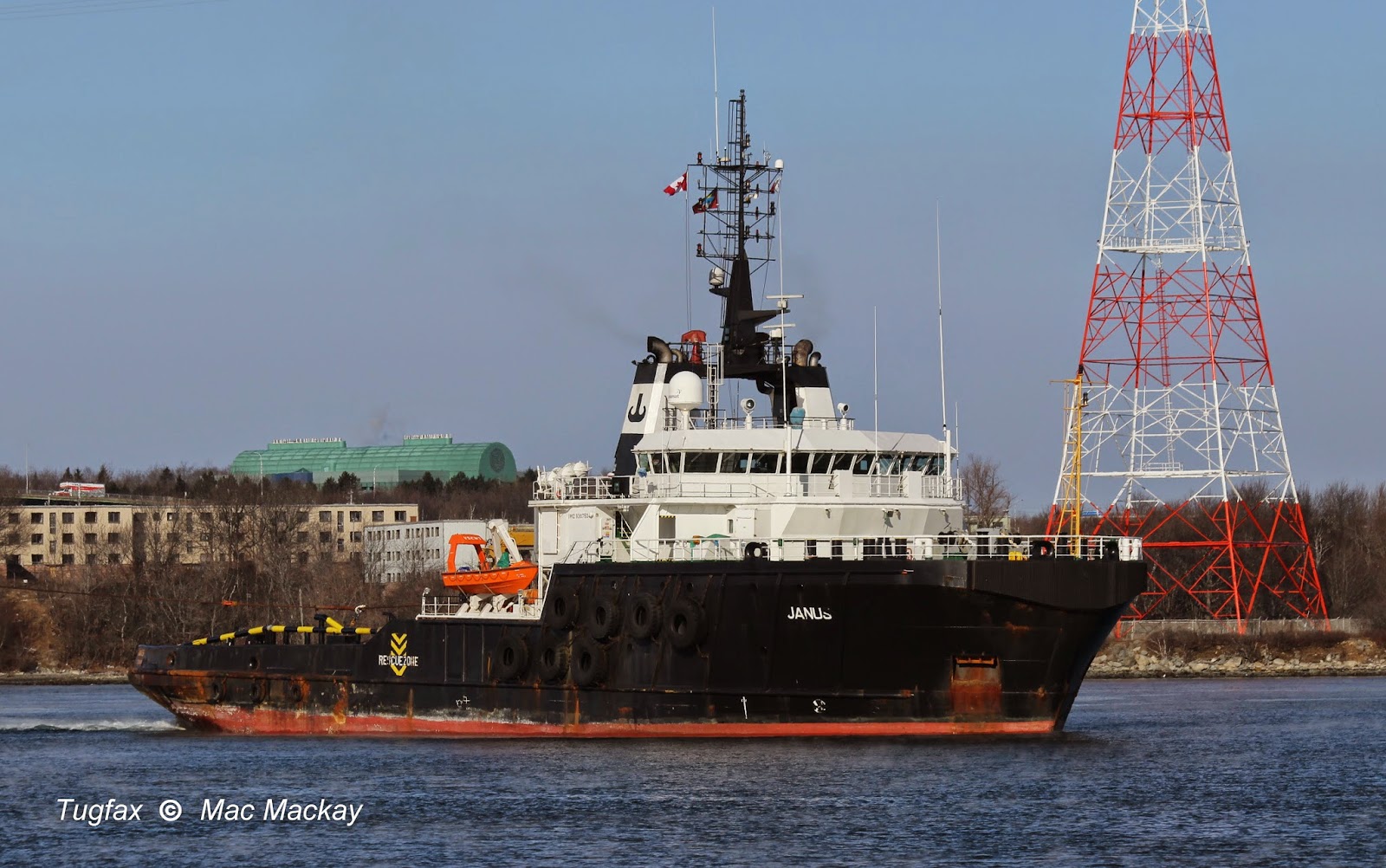 Soon however it was time for the main attraction as Janus got under way, with assistance from all three Atlantic Towing Ltd harbour tugs. Atlantic Larch worked the bow off the dock, as Atlantic Willow and Atlantic Oak did the same at the stern. Oak was the designated tethered escort tug. Once of the dock the other two tugs took up positions on the stern quarters to guide the rudderless ship through the Narrows and out of the harbour. Once the ship was clear of the dock Janus took the strain on the tow line, as the sound of its four MaK main engines coming up to speed reverberated off the freight shed walls - an impressive sound to hear. 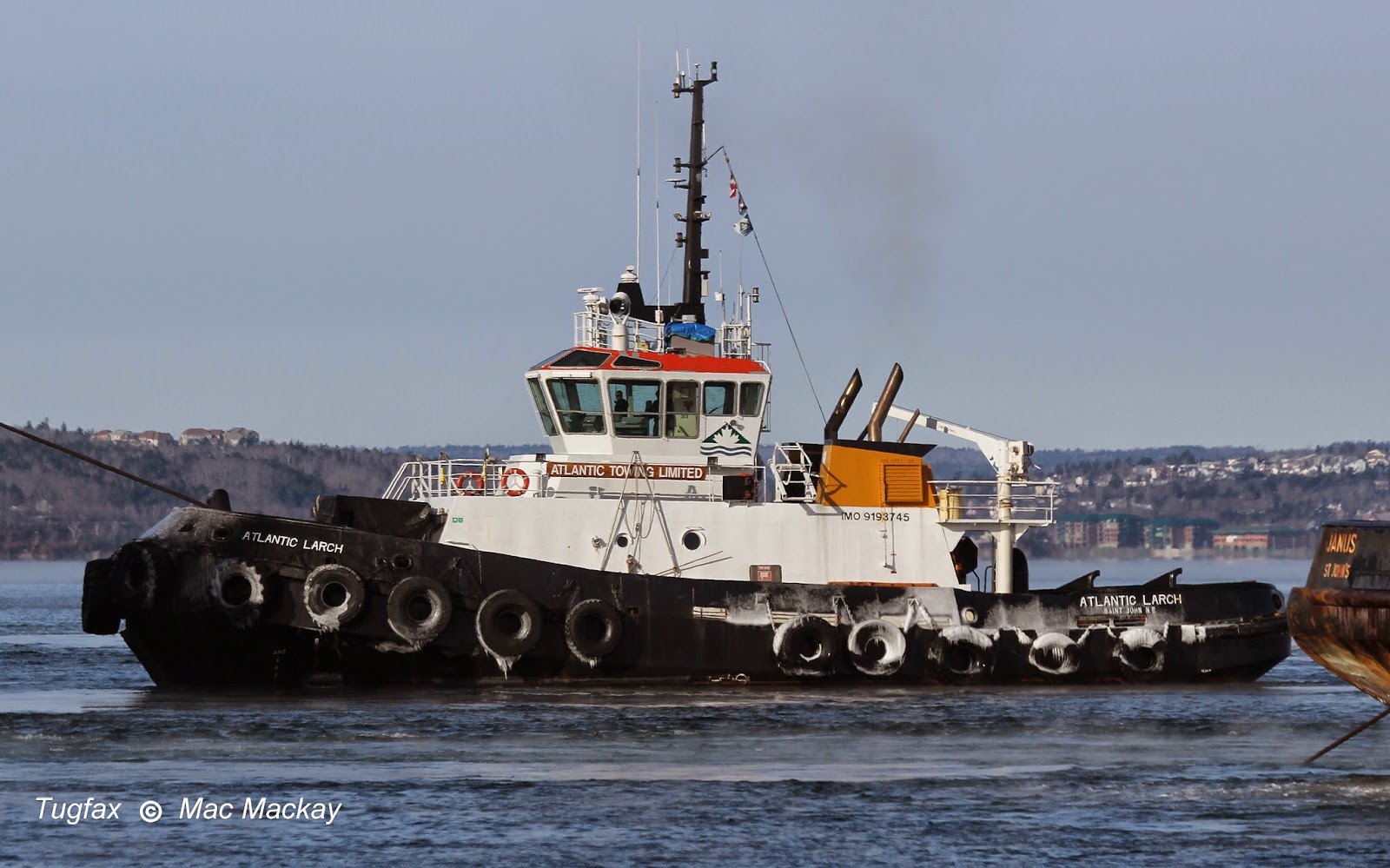 Larch pulls off the ship's bow. 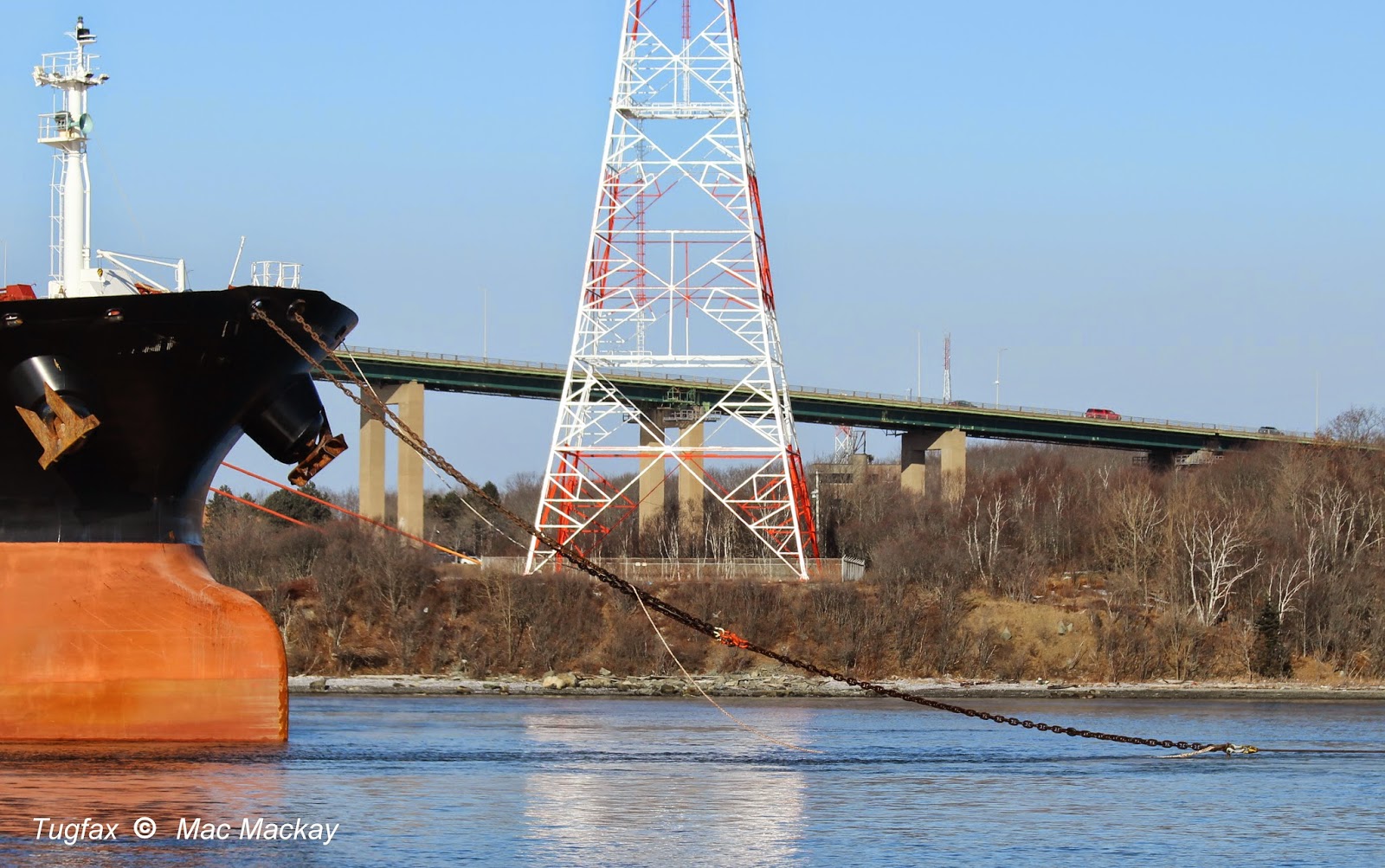 The tow line was made of a chain bridle, lead through two fairleads in the bow, and a rope retrieval line to the fishplate. The tow wire from the tug's winch was also controlled by a gog rope (yellow arrow in photo below). 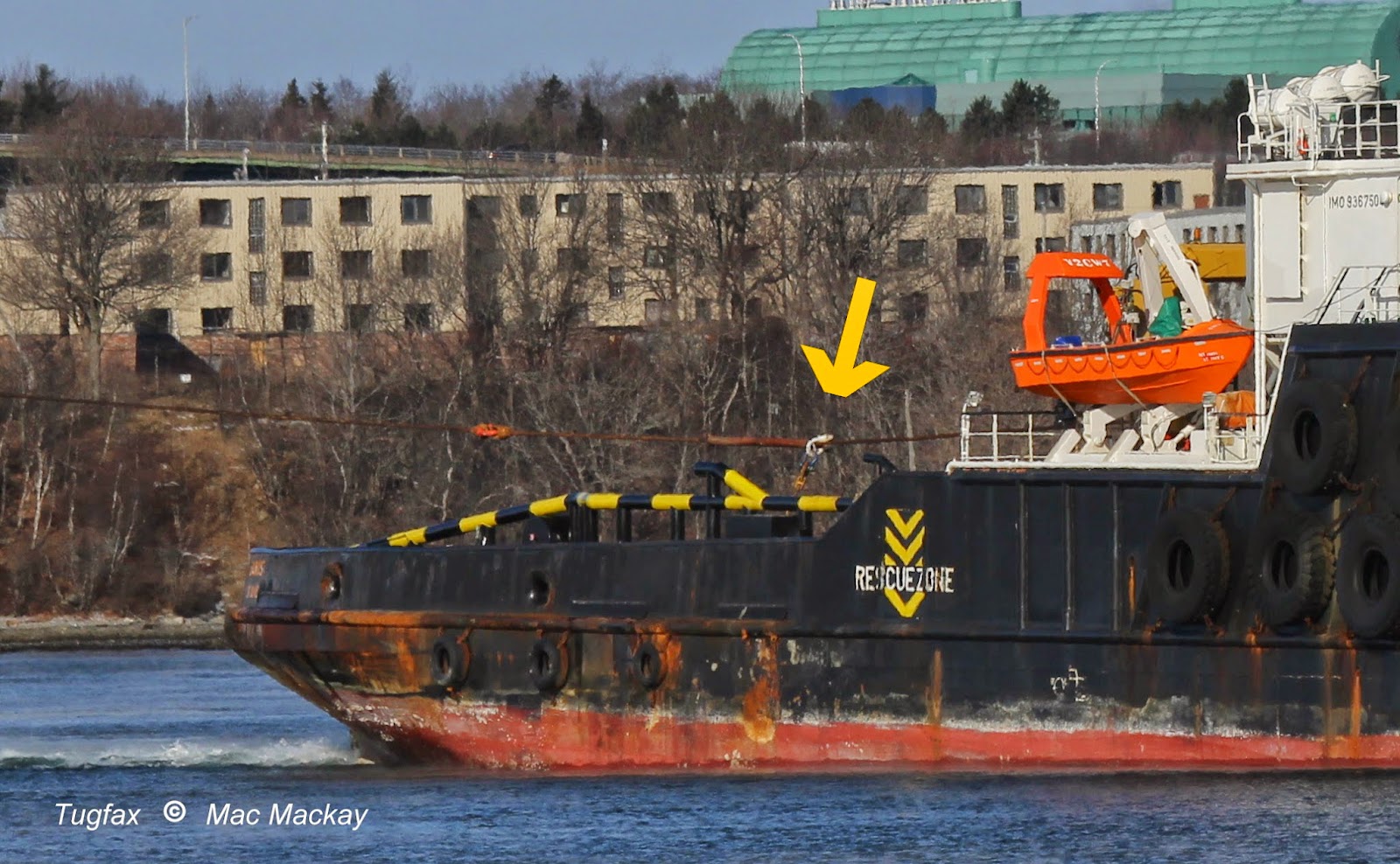 Janus' crew made up the tow very quickly, only arriving in Halifax Monday morning. The timing of the tow was critical however, since they wanted to get away before the next weather system arrives.

The tow is giving a January 23 arrival in Portugal, where the ship will be drydocked for installation of a new rudder.