Although Maersk Canada would prefer to have the mammoth tug/supplier Maersk Cutter fully employed, it's ready ability certainly came in handy this week. 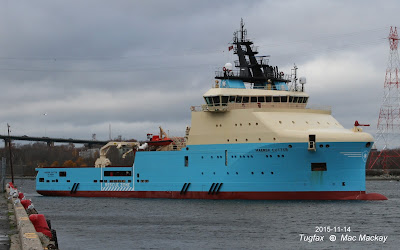 When the tanker British Merlin experienced a turbocharger malfunction, Maersk Cutter was called in take it in tow. The 63,661 grt, 114,761 dwt tanker was loaded with crude oil from Whiffen Head, NL for Philadelphia when it encountered the problem, and is now due to arrive in Halifax Sunday morning January 24 on the end of Maersk Cutter's tow wire.

It raises the question again of Canada's need for Emergency Towing Vessels (ETVs). Though comparatively rarely needed on Canada's east coast, there are occasions when a powerful tug is called for. Most similar vessels are employed servicing offshore petroleum work and are not standing by for ETV work. In this case the almost new Maersk Cutter 13,142 bhp has not found regular work since it arrived from the Asenav shipyard in Chile in September 2015, and could be called in when needed.

Secunda Canada's Ryan Leet has been on standby in Sydney "on spec" for towing work. However its 8800 bhp would be barely sufficient for a vessel the size of British Merlin . Similarly sized container ships and bulkers are also active in the region, and with winter upon us, with its attendant ice in the Gulf of St.Lawrence, caualties are bound to arise.

The container ship MSC Monica, although much smaller, ran aground in flowing ice in the upper St.Lawrence River this week and will need to be lightered off before it can be refloated. Local tugs will be more than capable of that operation, but it is a reminder that accidents will happen.