A pair of Svitzer tugs have arrived back in Halifax after many months away. 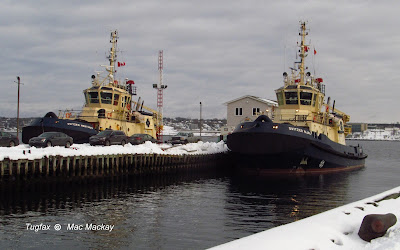 Svitzer Nerthus and Svitzer Njal , acquired by Svitzer Canada last year from their parent company, were contracted to work at the Baffin Island port of Milne Inlet during last year's brief arctic summer shipping season. They assisted bulk carriers into the remote port to load iron ore from the Baffinland Iron mine at Mary River, operated by ArcelorMittal.


After fitting out in Halifax, the tugs headed north in July, to rendez-vous with the first ship of the season, Federal Tiber. At the end of the shipping season in October the two tugs made their way south to Point Tupper for a crew change then carried on to Bermuda, bypassing Halifax.


In Bermuda they assisted the bulk carrier Balder for seven loads of granite fill for the new South Basin. The granite came from Cape Porcupine, on the Strait of Canso, and was unloaded into a 9 acre fill area. Each shipment took up to 36 hours to unload, with frequent repositionings of the ship. In total Balder delivered some 175,000 cubic yards of granite, between November 6 and January 10.
The ship was one of the largest ships to enter Bermuda's Great Sound and required the assistance of two powerful tugs at all times.


Bermuda does have its own local tugs, Powerful and Faithful, but they are fully occupied with normal port activity. The 3,000 bhp tugs are notable as the last tugs built by the well known Cochrane shipbuilders in Selby, England in 1992.