The Royal Canadian Navy has been looking at the idea of replacing its current fleet of tugs for several years. They are taking a long time to decide what to do, likely exacerbated by the recent federal election. With a new party in power there will be much going back over already plowed ground, and very likely the political masters will decide to plow new furrows perpendicular to the previous ones. 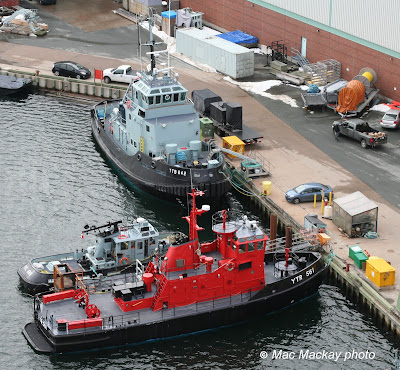 
The navy currently operates five harbor tugs (3 in Halifax, 2 in Esquimalt) of the Glen class built in the 1970s. Underpowered by current standards at 1750 bhp, and a 19 tonne bollard pull, they are however highly agile with V-S propulsion systems and short sea towing capability. The also have some fire fighting gear, but it is not up to the standard of a fire tug.
The navy also had.two fireboats, but they retired the Halifax boat Firebird in 2014. Both were purpose built and carried a crew of trained firefighters. Those firefighters now augment the tug crews if needed in an emergency.
The navy also has five smaller tugs of the Ville class that operate within the naval dockyards and handle barges, oil booms, and assist in ship docking. There has been no mention of replacing them, but they are even older.
It should be noted that all these tugs are operated by civilian crews, working under the jurisdiction of the Queen's Harbour Master.


Both classes of tugs and the fireboats were built for navy use and responded to the specific needs of the navy and the physical features of the naval dockyards. The two most obvious of those are the relatively light displacement of navy ships and the very tight confines between the jetties. This is where the current class V-S tugs show their worth, by fitting into the tight spaces without having to square up, and where high horsepower is not really needed.


When large naval ships from other navies come to Halifax they use civilian pilots and commercial tugs. This is a necessity since the civilian harbor pilots from the Atlantic Pilotage Authority work with the commercial tugs daily and have established communication protocols and know the capabilities of the tugs.

The exception of course is visiting nuclear submarines, which are handled exclusively by navy tugs, but with civilian pilots.

Canadian navy ships use navy berthing pilots and their own tugs and have entirely different commands and are familiar with the tugs' capabilities. The navy pilots are berthing pilots only and board the navy ships from the tugs or from launch boats, and do not do navigation even in the harbour..

The navy will be acquiring larger ships in the coming years (but it is still many years before the current frigates are replaced with cruisers, and new supply ships arrive). More horsepower may be warranted by then, and certainly the current stable of tugs will be well past old age at that time.

The navy does call in more powerful tugs from time to time, such as for the cold move of HMCS Preserver. When it banged into the Novadock in 2011, causing half a million dollars of damage to itself, it could could have used more powerful tugs.

However the navy is also looking at privatizing the delivery of tug services to its naval bases, by inviting in private operators to take over tug work. 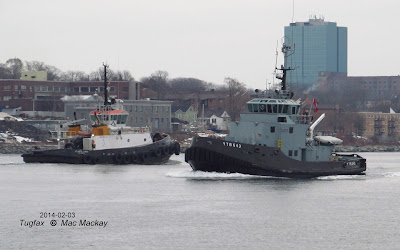 A 4,000 bhp civilian 50 tonne bollard pull tug, such as Atlantic Larch, at left, is quite standard in Canadian ports these days.
With 1750 bhp and 19 tonnes bollard pull Glenbrook is inadequate for most work.

It seems to me that the main issue then must be minimizing employment costs by reducing crew size. Wages and benefits are considerably lower in private industry and thus attractive to cost planners. Enhanced firefighter training and the handling of nuclear submarines however might reduce that cost gap. However most current tugs are designed for a harbour crew of three, so any new tug would be able to operate with a smaller crew - naval or civilian.

Newer tugs would certainly be nice, as would more power, but a leap to 4,000 to 5,000 bhp seems to be an unnecessary initial cost, since that kind of power is rarely if ever needed by the navy. On the other hand, tugs with less than that amount of power would never be of use to civilian operators in most ports, particularly Halifax, and would be confined to use for the navy only. [But see below for other propulsion options]

Firefighting is also almost standard these days on harbour tugs. Two of the civilian tugs in Halifax have that capability now, which exceeds the capability of anything the navy has. 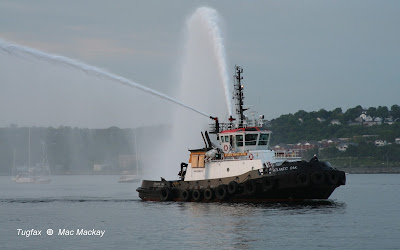 Atlantic Oak is one of two tugs in Halifax with extensive firefighting equipment. Trained firefighters would be needed to augment the usual crew in case of a serious fire.


Enhanced sea keeping would be desirable since the tugs need to tow small ships to Shelburne, Pictou and should be able to tow to St.John's and St.Lawrence ports for refits. The navy will be getting rid of its smaller ships, but there does seem to be a need to tow larger ships from time to time, so accommodation for larger crews for that duty seems reasonable.Those moves are so rare however that hiring in a tug from time to time would make as much sense in my mind.
(The unfortunate Athabaskan tow cannot be blamed entirely on civilian tugs - whoever decided that towing a dead ship form the Great Lakes to Halifax in winter should bear the majority of the onus for that fiasco.)

Hybrid or alternative fuel power systems would seem to be absolutely essential to meet the government's desire to be a leader in environmental matters. Of course the navy would not like their tug budget to be used up with costly experimental technologies, but there are enough proven systems out there now that premiums could be kept low. It is also time that the navy, and all other government departments lived up to environmental realities. 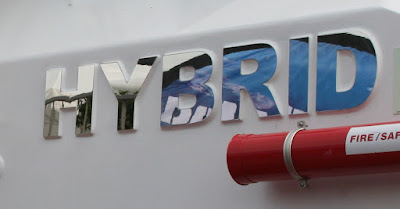 Hybrid systems allow for economical operation when less than maximum power is needed. Tugs can operate on batteries and auxiliaries for much of the time and only fire up all power when needed to push or pull a ship. The rest of the time, while in standby, or moving from pier to pier, they are on auxiliary backup or battery power.


In previous requests for interest for new tugs the navy seemed to indicate that ASD tugs were the expected propulsion system. I question how well these would work in the confines of the Halifax Dockyard, where V-S tugs are clearly justified. ASD tugs can sidestep but they lose power when doing so. 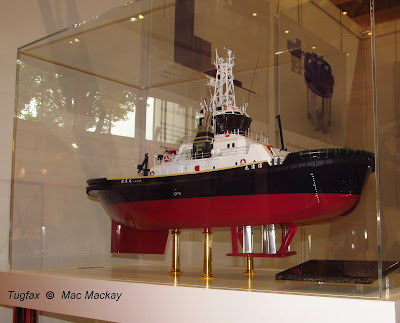 V-S propulsion can thrust in any direction by changing the pitch of the vertical blades. The tug does not have to change position. The old drawback of constant engine revs, no matter the demand, has been resolved with newer technology. 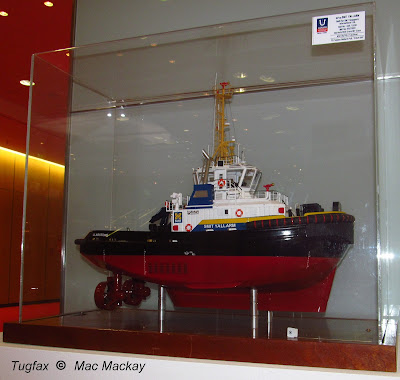 Conventional stern or bow mounted ASD systems can push or pull with almost equal force, but are much less effective sidestepping due to interference between the two rotating propulsion units.

Several recent new tug designs, such as the EDDY tug would also work, so I hope the navy is open minded enough to consider a variety of options. 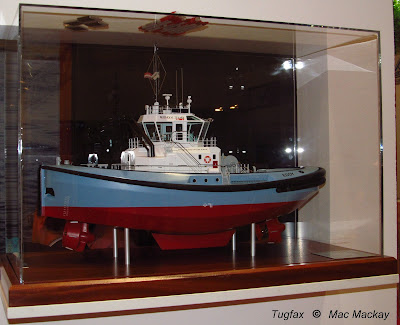 The Eddy tug has two in line ASD units - one at the bow and one at the stern. They can push broadside on without interference. The tugs are also bi-directional - ship docking over the stern and going to sea bow first- and they need only one winch.

The call for two winches is also an unneeded expense depending on the tug configuration. Many tug designs now allow for bi-directional operation so that only one winch is required. The same winch is used for ship berthing and ship towing and the tug is designed to operate stern first in one mode and bow first in the other.  In fact the current navy tugs do this with only one winch. 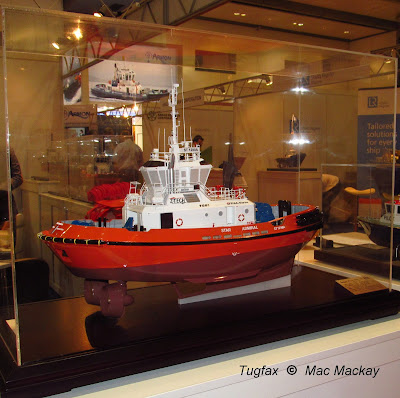 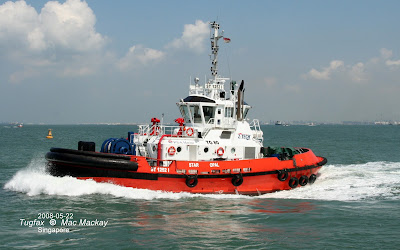 Z-Tech tugs, now in wide use in ports such as Singapore and Houston, work very adequately with one winch, and are bi-directional, Depending on requirements, they can run bow or stern first equally well. Star Opal is running at high speed stern first in the lower picture, but can go to sea bow first (as in the orientation of the model in the upper picture)


Recent material seems to indicate that the navy would accept tugs of up to 5 years old. Sorry to say, but even five year old technology is ancient in the rapidly evolving tug industry. They really ought to be looking at something that will not be obsolete when delivered.

I have some suggestions:

1. Buy a low cost proven design.The Dutch designer/builder Damen is building three tugs for the Dutch navy and two for Sweden's navy with slight variations. Canada should be able to piggy back on these, and in fact could order kits from Damen for assembly in Canada. At least two Canadian  Shipyards have experience in building Damen kits (Halifax Shipyard built the Coast Guard patrol boats and Groupe Océan built a dredge with Damen parts.) These are also hydrid tugs.
See this article describing the tugs: http://www.maritimejournal.com/news101/tugs,-towing-and-salvage/newbuild-tugs-for-dutch-and-swedish-navies


2. Whatever they do, look for latest technology, high efficiency hybrid, dual or alternate fuel systems and defray some of the added cost with R&D funding for the environment. There are leading edge Canadian technologies out there that need to be promoted, both at home and abroad. This would be a great boost for them. 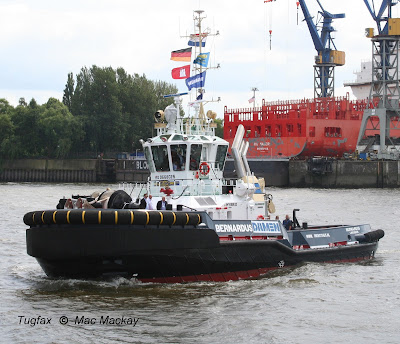 Bernardus  is just one of many hydrid tugs operational today.

3. Go with a performance based private contractor with a ten year change out policy for brand new  tugs, so that only the latest technology is used. The contractor would be given five years to provide brand new tugs (one per year) each to operate for a stated period. At the end of each period the contractor would provide a brand new replacement tug. He could sell or fold into his own fleet the tugs coming off hire from the navy when they are still worth something on the open market.
This program could go on virtually for ever and ensure a continually renewing tug fleet and an allowing it to evolve as technology matures. It could also help to support a tug building shipyard with a steady flow of work.

In conclusion I will sorry to see the old Glen tugs go - they have been a fixture on the harbour for so long, but change they must. 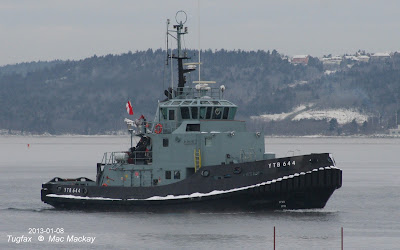 Glenside makes its way across Bedford Basin on a wintery day.