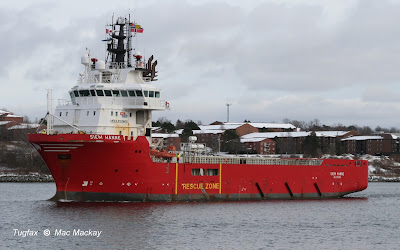 Built in 2007 to the Aker VS 470 Mk II design, the vessel is DP2 equipped and with a gross tonnage of 2615, it has a deadweight tonnage of 3750 tonnes. The basic ship was built by Aker's Tulcea shipyard in Romania. It was then towed to Norway where it was completed at the Aukra yard.
This ship is registered in Aalesund, the northern Norway community that has long time ties to Halifax  through fisheries. Despite this, the ship is apparently managed out of Siem's Polish office. 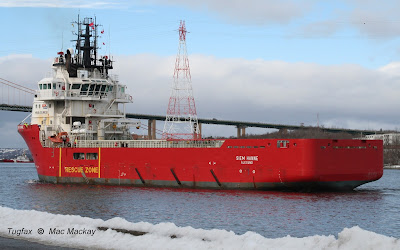 It displays the blunt stern of a pure supplier (without towing or anchor handling capability). It also has a well deck to protect workers and cargo.

Siem Offshore 's current fleet includes more than 50 ships with 8 more under construction, not including Secunda Canada LP in which Siem has a 50% interest.

Siem Hanne is here to begin a four year bareboat charter to Secunda. It will presumably have to be registered in Canada for that work, and will likely require some modifications to comply with Canadian regulations. It may even acquire a traditional Secunda name.