ETV on the horizon

Among the many features in the 5 year plan, the Canadian Coast Guard will lease two "large vessels capable of towing commercial vessels and large container ships" [who writes this stuff?] and the Coast Guard will equip (four) of its major vessels with towing capability by installing "towing kits".

So what will this mean?
The British Columbia government requested three large rescue / towing vessels - they will get one.
These blogs suggested three to five on the east coast - we will get one.
The arctic will get none - unless you count the "towing kits  " - sounds like something you rent from U-Haul for the weekend!

With 500 offshore support vessels laid up world wide and 100 in the North Sea alone, they shouldn't have any trouble finding a suitable vessel to lease. In fact they might look no farther than Maersk Canada which has the 150 tonne bollard pull under employed Maerk Cutter and it sister Maersk Clipper.These 15,000 bhp state of the art vessels may even exceed what is available on the world market. One on each coast would be a vast improvement on the present situation where have only vessels of opportunity, with no mission specific training. They would be wonderful for deep sea work but will be stretched very thin over a wide geographic area. 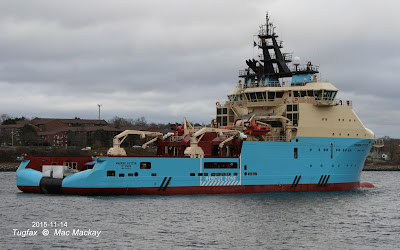 Last year the Maersk Cutter was used for a cable repair job - way under utlilized for its capabilities.

By leasing of course the government will get civilian tug crews, who may know something about towing. Canada's offshore vessels have towed oil rigs, FPSOs, icebergs and are used to close quarters work with oil rigs and fixed platforms.

The Canadian Coast Guard on the other hand has always been averse to towing and in fact refuse to do it except in case of direst emergency. So let us hope that these "tow kits" include a user handbook. Incidentally, CCGS Terry Fox should need no "tow kit" - it was equipped for anchor handling and towing when purchased by the CCG. Why it wasn't mentioned in the announcement is a mystery. 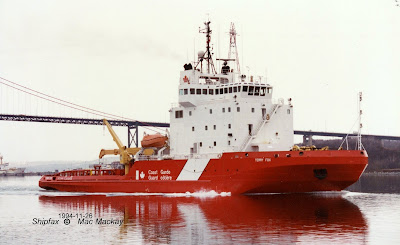