Thanks to Towingline * I have learned that two Canadian-built tugs have been put up for sale in Denmark. It is explained that they are coming off a five year charter and have apparently been replaced by newer tugs.
This comes as a bit of a surprise, since I assumed that Canadian owners would have snapped them up, or at least been in line to acquire them.

The tugs in question were the last two tugs of seven built by Eastisle Shipyard in Georgetown PEI for Danish owners Nordane Shipping. They were part of a series of  more than 30 of similar design, and were, at least from my impression, among the best. At 5,000 bhp, 70 plus tonnes bollard pull and ice class**  firefighting ASD tugs, they should be in demand. Four of the earlier Nordane tugs,  have come back to Canada and two each are serving Svitzer and  RioTinto Alcan. Groupe Océan also repatriated two other Nordane tugs of a different class, built elswehere. 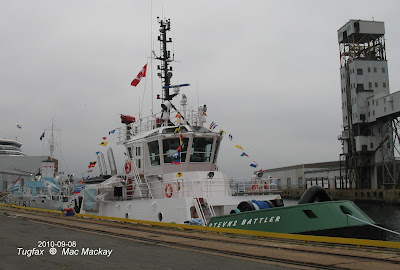 Built as Stevns Breaker and Stevns Battler these two passed to Svitzer control in 2010 as Svitzer Nabi and Svitzer Nari. The former spent a year as Svitzer Hutton for a temporary reassignment to the UK in 2012. Svitzer Euromed currently owns the tugs as far as I know, and I am surprised that they are not being transferred to Svitzer Canada's fleet. 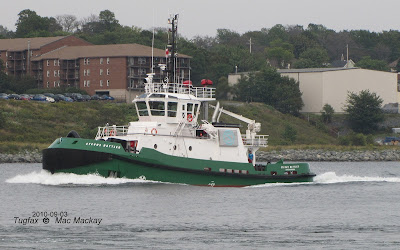 Stevns Battler on the way to Bedford Basin for trials.

Both Groupe Océan and Atlantic Towing Ltd (who started the Eastisle sereis at their parent company's yard) have several similar class tugs in their fleets now, so these would seem to be a natural fit for them too.

I could speculate on why none of these operators are grabbing these tugs, but that's all it would be:
Speculation 1: Atlantic Towing has enough tugs to do the work they have - I actually think they could find work for one more if they got it for the right price, and maybe two. The ice class would be an appealing feature I would think.
Speculation 2: Groupe Océan has too many tugs, particularly with delivery of Océan Taiga, and as they near the end of their work in Newfoundland. - but they also have many older tugs that could stand replacement.

Speculation 3: Then there is Arcellor Mittal which needs to replace its two tugs at Port-Cartier - but they really need Voith-Schneiders for their constricted port.
Speculation 4: McKeil has just upgraded to some big tugs with more ocean going capability - I agree with that, andl also they have a raft of older idle tugs, but are apparently in no hurry to scrap or replace them, since thet can meet the need with their newer tugs.
Speculation 5: Svitzer has an odd lot of tugs and could consider replacing at least two of them to have a consistent fleet of similar, even interchangeable, tugs, with a bit more power and capability - apparently that is not the case, and maybe, just maybe, they don't want these two to fall into a competitor's hands, so maybe are offering them for sale on a restericted basis.
All speculation.

* If you don't know about Towingline it is a relliable source of worldwide tug, towing and workboat info. To reach the site, use the link in the left hand column.

** Update: thanks to alert readers for pointing out that these are not ice class tugs.