The Maersk Canada tug/supplier Maersk Chancellor arrived in Aliaga, Turkey November 16 to be scrapped. Its Canadian registry was closed November 15, as Maersk pares down its supplier fleet world wide. 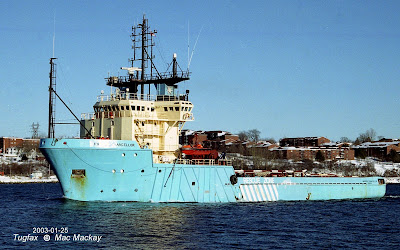 Maersk Chancellor was built in 1986 by Orskov Christensens Staalskibs Verft A/S in Frederikshaven, Denmark for O.I.L. (Ocean Inchape Ltd) as O.I.L. Chancellor, a 14,161 bhp anchor handling tug supplier. Maersk acquired the ship in 1991 and renamed it under Isle of Man flag.
It was flagged in Canada November 20, 2001, registered in Halifax, and arrived here December 20 for work with the West Navion oil rig.
Later in began to work out of Halifax supporting the drilling rig Eirik Raude for Encana but spent most of its nearly 15 year Canadian run working from St.John's, NL.

A sister vessel from the same yard, built as Challenger III in1986, but soon renamed  O.I.L. Challenger became Maersk Challenger in 1991 and was registered in Halifax October 8, 2002 and began work with Eirik Raude in November. It eventually moved on to Newfoundland too.

Its Canadian registry was closed in 2014 when it was sold the Danish Blue Star Line and renamed  Blue Aries. It is still working out of Denmark.


A third sister vessel, built in 1985 as Kongsgaard, and renamed  O.I.L. Champion in 1987 became Maersk Champion in 1992. Although never registered in Canada, it did work out of Halifax and Sheet Harbour but under Danish flag, from June to October 1999 for the Sable gas project rig Rowan Gorilla III. 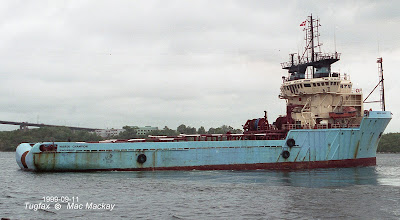 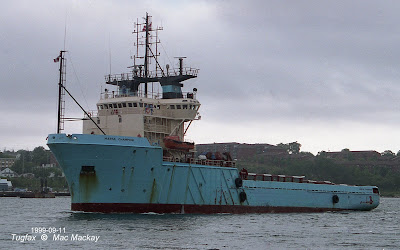 Flying the Danish flag from the mast head and the Canadian flag forward, Maersk Champion turns off pier 9 to tie up at the EnCana dock.


Maersk Champion is currently at work in Brazilian waters, out of the port of Macae (no relation).