Atlantic Towing Ltd's new suppliers swapped places at pier 8 this morning. Both Atlantic Griffon and Atlantic Shrike are nearing completion, but did not use their own engines. The three harbour tugs Atlantic Oak, Atlantic Fir and Atlantic Willow moved the boats, exchanging berths and turning them end for end. 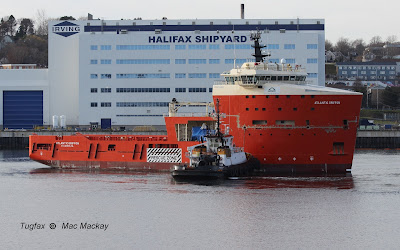 Atlantic Griffon was first off the dock, holding in the stream with Atlantic Fir.
The weld line where the superstructure was attached has not been painted over on the starboard side.
It will be painted from shore, once the boat is back alongside.

Atlantic Shrike readies to turn end for end and move to the south end of pier 8. 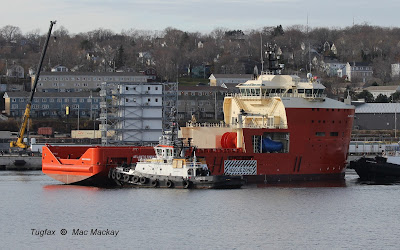 Atlantic Willow on the bow and Atlantic Oak on the stern rotate the Shrike in the stream. Note the open winch reel. 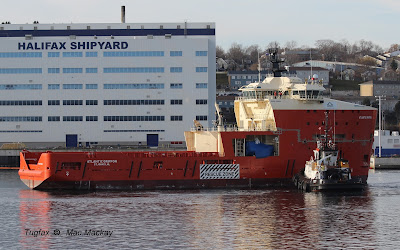 It was then Griffon's turn to go in to the north end of pier 8.
Note what would be the winch area is completely plated over, indicating that no winch has been fitted, unlike Atlantic Shrike, where the winch reels are exposed. 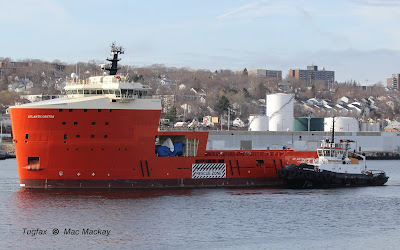 On both boats the weld line has been painted over from the shore side.
Not a very good colour match.
Also the amateurish bow lettering does not compare favourably with the welded raised lettering on the stern, which was applied by the Damen Shipyard in Galati.

Fleet mates Atlantic Heron and Paul A. Sacuta (laid down as Atlantic Owl) are nearing completion in Europe. A recent photo shows Paul A. Sacuta on trials in the Netherlands. It has been modified for repair and maintenance work and equipped with a 100 tonne capacity crane. Atlantic Heron is still in Galati.
See also:   http://www.shipspotting.com/gallery/photo.php?lid=2546502