Based on recent court filings it seems likely that Northern Transportation Co Ltd (NTCL) will make an assignment into bankruptcy shortly after December 15.
While the company has been in creditor protection the court appointed monitor has been able to sell assets piecemeal , but no buyer has come forth to take over the company as a going concern.
As a result the remaining assets will be sold or scrapped. A court hearing will determine if the underfunded pension plan is entitled to any of the proceeds. If not the secured creditors will get about 6 cents on the dollar.
The once mighty company in its heyday ran a huge tug and barge operation on the Mackenzie River system, supplying communities all over the western north with goods that could not be transported any other way. They rammed through as much freight and fuel as they could in the short five month shipping season to keep the Nunavut region supplied for the whole year. Recent years were not kind to the company and it has been struggling for a long time.
The future of northern supply via the Mackenzie system is now in serious doubt, unless another company can step into the vacuum created by the disappearance of NTCL.

As of September there were some 174 vessels registered to NTCL according to the monitor. Of these 158 were in NTCL possession, 6 were "unknown", 2 were sold prior the creditor protection, 81 subject to pending offers and 77 considered to be scrapped, abandoned or out of class.
The monitor sold 8 others as non-core assets, to rid the books of a number of tugs and barges that weren't part of the basic Mackenzie fleet. See Tugfax October 25, 2016:  http://tugfaxblogspotcom.blogspot.ca/2016/10/northern-shakeup-ntcl.html
Most of the remaining operational fleet, particularly the aging tugs, cannot operate anywhere else, so someone could possibly acquire some of them as the nucleus for a new operation. Without that happening there must be considerable anxiety in the western north about next year's supply.
NTCL also had an extensive ship repair base in Hay River that is also presumably up for sale.

Rumours persist about a couple of tug companies taking a serious look at the assets, but nothing has been said officially.

More about the tug Keewatin mentioned briefly in the October post.

The tug was built in response to a federal government request to service five communities on the west coast of Hudson Bay and Coral Harbour (on Southampton Island).  After delivery by Yarrows shipyard in Esquimalt in 1974, the tug sailed from Victoria with four barges(stacked in pairs) via the Panama Canal to Valleyfield, QC where it wintered. In the summer of 1975 it loaded cargo and sailed for Churchill.
In 2002 the tug returned south arriving in Halifax in November from Rankin Inlet and went on to Shelburne for refit. 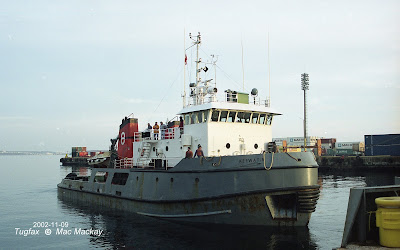 At the time it was working in joint venture with Atlantic Towing Ltd.
It worked on the Great Lakes in 2003 and 2004 with barges carrying stone. However it returned to the Atlantic Coast in 2004 and was in Halifax in June towing an Atlantic Towing Ltd barge. 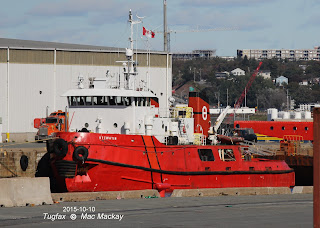 On its last visit to Halifax in October 2015, it had the barge NT 1509 in tow and loaded project cargo for Newfoundland.
Keewatin is powered by three 16 cylinder Caterpillar engines totaling 3,375 bhp driving triple screws on a 6'-6" draft.
As mentioned in the previous post it has been sold to a Newfoundland company R.J.G. Construction Ltd.