It appears that the supplier Breaux Tide is leaving Nova Scotia waters for another assignment. The boat was one of two Tidewater vessels engaged to support Shell's exploration program with the drill ship Stena IceMAX. 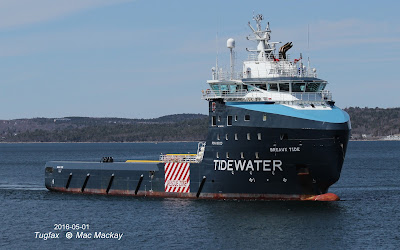 Both received coasting licenses to allow the Vanuatu registered ships to take the Canadian flag on a non-duty paid basis and to work in Canadian waters. Management of the two was by Atlantic Towing Ltd (ATL), as bareboat charters. The Jones Tide did not complete its first year when it was stood down after Stena IceMAX had the drill stem drop to the seabed in March 2016. 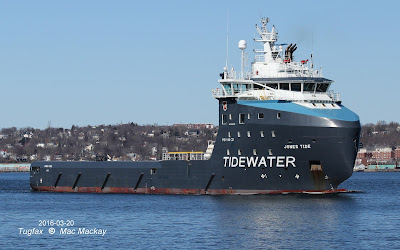 Jones Tide outbound. Ten days later it was idled at the old Coast Guard base (in the background).

After sitting idle at the old Coast Guard base for the month of April 2016, it reverted to the Vanuatu flag and sailed on May 5, 2016. It is now working in Trinidad and Tobago.


Breaux Tide renewed its coasting license in August 2016 for another year, but last month it appears to have gone off charter, and has been idle at the old Coast Guard base in Dartmouth. It will be sailing today for an as yet undisclosed location. 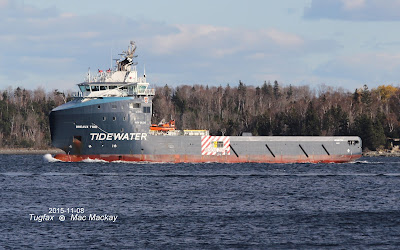 As of June, Tidewater, the largest offshore vessel operators in the world, had 87 of its 181 boats stacked and that figure may be larger now. However they may have found work for a new vessel like Breaux Tide.

Delivered by Jiangsu Zhenjiang in March 2015, the 3,927 grt supplier arrived in Halifax in late August 2015 via Capetown and Port Gentil, Gabon and was registered in Halifax August 31.
. 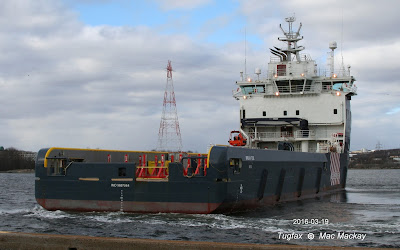 Stena IceMAX is entering a new phase as it is reported that the ship must now drill a horizontal offset after encountering a major fissure in its current well, Cheshire. Shell has also announced that it will not be drilling any more in the current program, which was for two wells with an option for more if results were positive. The first well, Monterrey Jack did not deliver satisfactory results, not to mention the huge dollar loss due to the drill riser problem.


Support for the drill program is now being provided by Skandi Flora  (bareboat chartered by Mathers) and Maersk Nexus which joined the program in August and did not need a coasting license, since it is a Canadian flag vessel, Scotian Sea (Secunda.) and Atlantic Tern (ATL) also appear to be doing standby duty. Thus Shell has spread their largess amongst all the players in the supplier business. However they were not without criticism, since almost all the crew members are from Newfoundland, and the work is offshore Nova Scotia. The reverse situation would not be tolerated long in Newfoundland!