An offshore tug, best remembered as Maersk Bonavista has now been sold to breakers in Chittagong, Bangladesh. It was built however as Bonavista Bay for Husky Bow Valley, and served under that name from 1983 to 1988. 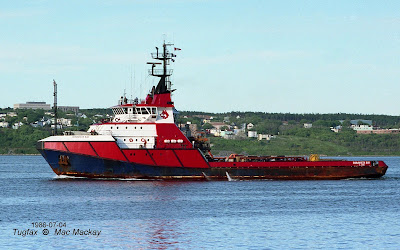 As delivered the unique vessels also had a unique colour scheme of very deep blue and red hull. The red funnel continued the hull red colour and the white band carried the familiar Husky silhouette.

A product of the now defunct Vito Steel Boat + Barge Construction Ltd in Delta, BC, it was one of six sisters, four built in Korea, and the fifth, Placentia Bay by Bel-Aire Shipyard in North Vancouver.
The unique looking craft, were powered by four MaK engines, each 2720 bhp, producing a respectable 125 tonne bollard pull, through two controllable pitch props in nozzles. They also had three thrusters at 800 bhp each, two forward an one aft. The had accommodation for 14 crew and 8 passengers.


Bonavista Bay and Placentia Bay arrived in Halifax together June 23, 1983, fresh from the builders, via the Panama Canal.

In 1988 Maersk made its foray into Canada by acquiring the entire fleet of six, and quickly renaming them by removing "Bay" and adding "Maersk". It was some time before they were fully repainted. 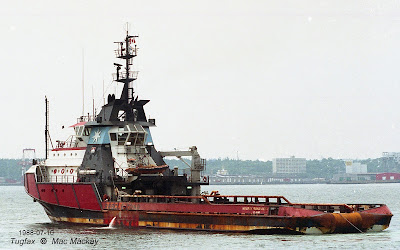 When Maersk took over and renamed the tugs, they changed the funnel marking immediately, but left the hull until the next refit.

Maersk became fully established in Newfoundland, but the tugs did work from Halifax at various times. 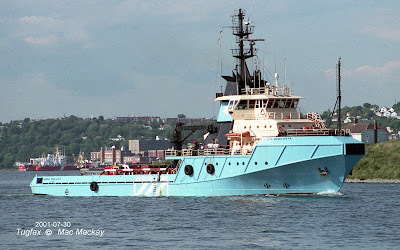 Under Maersak ownership, they wore the equally distinctive and traditional Maersk blue hull and tan superstructure found on Maersk cargo ships and tankers.


In 2006 Maersk Bonavista was reflagged to the Bahamas and in December 2007 it was sold to Rolf Berg Drive of Norway and renamed Drive Bonavista. It is under that name that its sale was announced this week.
AIS positioning for the tug shows it anchored in the Bay of Bengal since December 16. It had completed a time charter to the Gujarat State Petroleum Corp in June 2016.