It turns out that the Pacific Hickory's recent Canadian visit was also its last. As reported here the tug arrived in Montreal in November October 22 to tow out the laker Atlantic Erie.
See: http://tugfaxblogspotcom.blogspot.ca/2016/10/pacific-hickory-return-visit.html 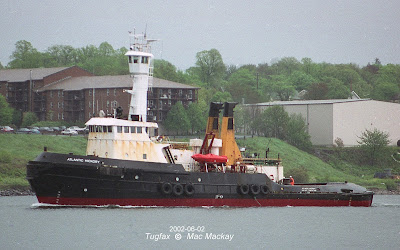 The ship was renamed Atlantic  Spirit of Shpongle for the tow which left Montreal November 6 4. They encountered some foul weather in the Gulf and chose to take shelter between PEI and Cape Breton, sailing well south to the Cape George area. They finally did make it out through the Cabot Strait and arrived at Aliaga, Turkey December 11.
The Pacific Hickory was laid up in Rotterdam for several months before the this trip, whether due to lack of work or mechanical issues, no one seems certain.
Nevertheless soon after reaching Aliaga, the tug itself was also beached for demolition on December 15. 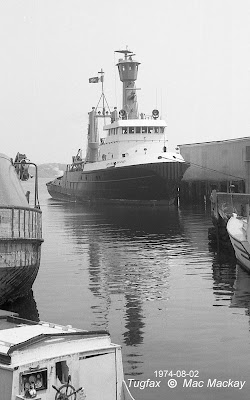 My first photo of the Irving Miami in 1974. The tug was one year old and was here to assist in the trials of the oil rig Sedco 704 but arrived a few weeks early for drydocking at Dartmouth Marine Slips. It tied up at the Irving Oil wharf at the foot of Sackville Street (now the pilot boat dock) before the drydocking.
.
Posted by Mac at 9:57 PM