Tugs at work, tug at rest

Harbour tugs get to work in all kinds of weather from hot to cold, wet to dry, calm to windy, but the worst must be the frigid winters when spray freezes to steel.

This morning, although the wind had died down, the air temperature was still minus 13C and there were still traces of sea smoke as Atlantic Oak and Atlantic Bear were called out to assist the tanker Silia T to anchor in Bedford Basin.[see also Shipfax]
Harbour regulations require that ships of this size use two tugs to transit the Narrows, one forward and one as tethered stern escort. 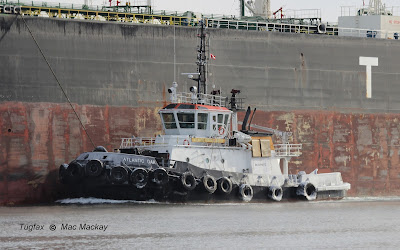 Atlantic Oak, usually the stern tug, got the forward position this time around. She wears a thin coating of frozen spray. 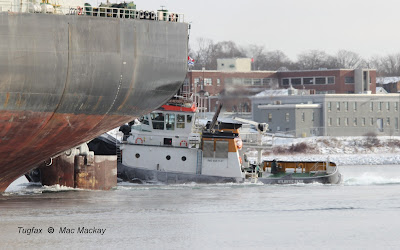 The more powerful Atlantic Bear got the aft position and did some real work to swing the ship's stern dipping her rail as she heeled into her bow line. 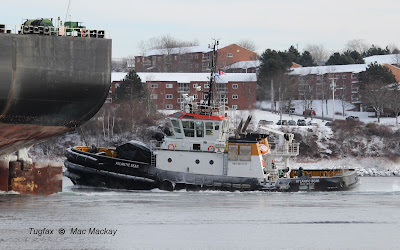 It took only a few minutes to adjust the ship's course and the tug was able resume an even keel. Despite its immense size, a big ship's rudder is ineffective at slow speed and when the ship is light. The tug provides far more force and can respond rapidly. 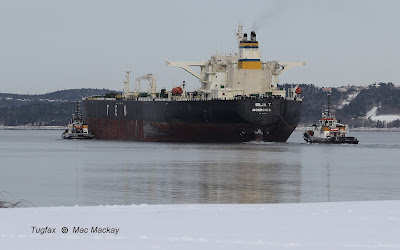 The tugs stayed with the ship as it entered the Bedford Basin and would assist it to stop and to turn into the wind at the anchorage.

Meanwhile another tug was at rest at Dominion Diving. Dominion Bearcat has been undergoing a leisurely refirt for almost two years at its owners base in Dartmouth Cove. The tug was built in 1987 as GSI No.1 by Georgetown Shipyard in Prince Edward Island for their own account. In 1992 it was sold to the Mersey Paper Co, Liverpool, NS to assist ship docking at the mill's pier in Brooklyn. It was renamed Mersey Pride.
When the paper mill was closed in 2014 (it is now the site of a shipbreaking facility) Dominion Diving bought the tug and renamed it. They have since made numerous modifications for their own needs and painted the hull in the company colours (it had always been unpainted aluminum), making a very handsome job of it. 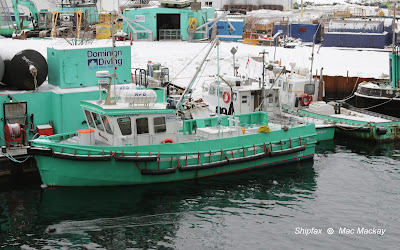 A member of the local duck population touches down adjacent to the newly refitted boat. Fleet mates Dominion Pursuit and Big Steel wait for work in the background.


Dominion Diving carries out an extensive underwater business, but also provides pilot transport, line boat, workboat and supply barge assist in Halifax, and frequently rtravel to other parets of the region. Dominion Bearcat should serve them well in a variety of jobs.