Two of the regular Halifax tugs sailed today to be replaced by two from Saint John.
Atlantic Willow is southbound - maybe for refit in Shelburne, while Atlantic Fir is northbound in the direction of Newfoundland.

Replacements are the Atlantic Hemlock and Atlantic Bear. 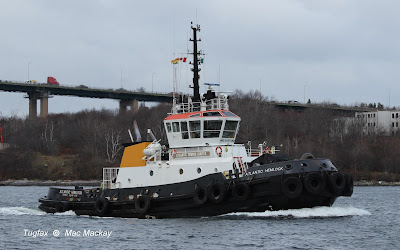 Atlantic Hemlock dates from 1996 and is a 4,000 bhp ASD tug. It has the distinction of being the only tug in the current inshore fleet to have made a transatlantic voyage. When Irving Shipbuilding was promoting its successful line of tugs from the East Isle Shipyard, Atlantic Hemlock visited several European ports including Rotterdam in 2000. It was also present at the International Tug & Salvage conference event at St.Malo, France. It worked briefly off Broadstairs, UK on a cable repair project, but after an idle spell in Southampton returned to Canada. It is now based in Saint John, but frequently does "outside" work beyond the port. It was here last month towing the barge Atlantic Sealion. 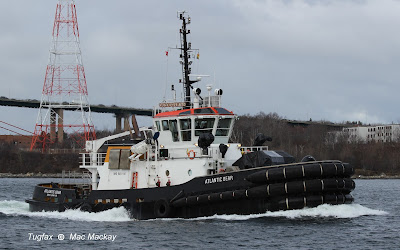 Atlantic Bear was built in 2008 as a variant on the East Isle design. With its two sisters, Atlantic Beaver and Spitfire III, it was designed to berth ships at the LNG terminal near Saint John. With 5,432 bhp and a bollard pull of 70 tonnes they are the most powerful tugs in the ATL inshore fleet. Due to a drop in LNG demand, the tug has been freed up to work outside. It recently assisted in the placement of the tidal turbine in the Minas Basin.
It is equipped with extra bow fendering and has water cannons mounted on the bridge deck. They are tarped in, as is the large ship berthing winch on the foredeck.
The three tugs of this tpye are owned by Atlantic Reyser Ltd, a joint venture between ATLand the LNG terminal partners, and managed by ATL.