Atlantic Poplar on the move 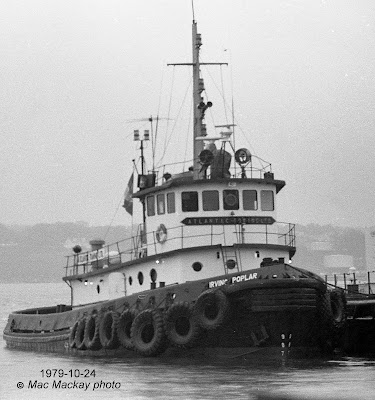 1. Irving Poplar with a barge at the old Irving Oil dock in Halifax. 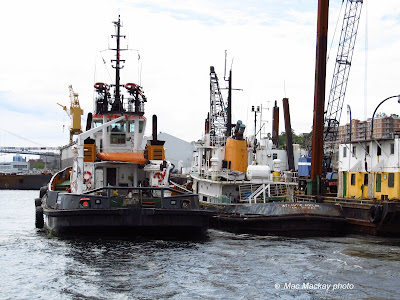 2. Atlantic Poplar is brough alongside the dredge scow Channelmaster (another veteran).


The veteran tug Atlantic Poplar was moved back to pier 6 yesterday, by Atlantic Willow, after a few weeks at the IEL dock.
Built by Erieau Shipbuilding & Dry Dock Co Ltd in 1965 at Erieau, ON, the tug was originally called Amherstburg, named for its home port, near Windsor, ON. It was built for the well known McQueen Marine Ltd., towing and salvage specialists on the Great Lakes.
J.D.Irving acquired the tug in 1975 and it became Irving Poplar, and was renamed Atlantic Poplar in 1996 as part of a fleet renaming by Atlantic Towing Ltd.
It has been laid up in Halifax for a number of years, with reported engine issues. It is a twin screw tug, powered by two V-8 Paxman engines producing a total 2270 bhp.
Ever hopeful that it will be rebuilt and returned to service -I have seen no activity on her for a long time. I expect that she may be rebuilt for the Harbour Devlopment dredging fleet if they can find enough work for her.
Her recent move was just to return her to her usual berth after she was displaced by fleet mate Swellmaster that came in a couple of weeks ago and left with a dump scow.
Under Atlantic Towing ownership it has been based in Saint John, Belledune and the Strait of Canso, as well as in barge towing all over Atlantic Canada.