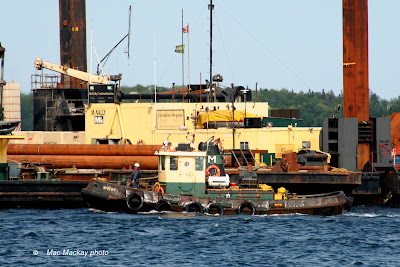 1. Whitby at work on July 11 at the Halterm extension. 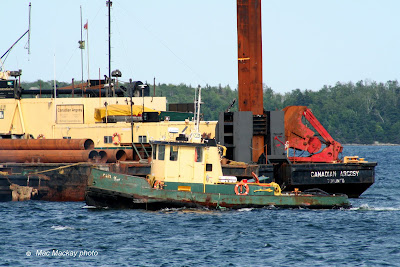 2. Carl M swings around the Canadian Argosy at Halterm July 11. 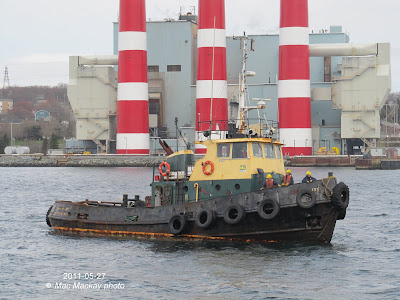 3. Mister Joe arriving in Halifax in May.

As reported in Shipfax, McNally Construction has been purchased by Weeks Marine, Inc of New Jersey. McNally will continue to operate under its current name as a wholly owned subsidiary.
As the largest marine construction operation in eastern Canada (Ocean Group is probably a distant #2) McNally has a substantial fleet of work barges, scows, dredges and about 20 tugs.
There is unlikely to be any outward change in the look of the fleet in the near future, but some of the older plant is certainly due for replacement.
One of McNally's hard working tugs is Mister Joe, built in 1964 by Russel-Hipwell in Owen Sound, ON as Churchill River. After a career in James Bay and Hudson Bay, it worked on Hibernia for a time, before its acquisition of Beaver Marine (a McNally subsidiary that was folded into the larger company) in 2000. The twin screw tug of 750 bhp is named for Joe McNally, one of the company founders.
Smaller tugs include Carl M, built in 1957 as Louis M (renamed in 1975) and acquired from the now defunct McNamara Construction rates 475 bhp. Whitby (also a former McNamara tug) was built in 1978 and rates 474 bhp.
.
Posted by Mac at 11:45 AM