Oldie from the Shoebox 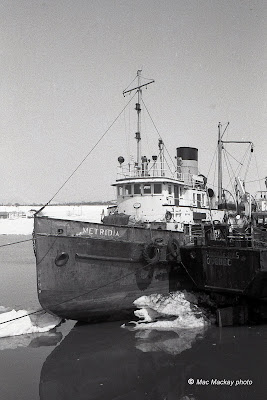 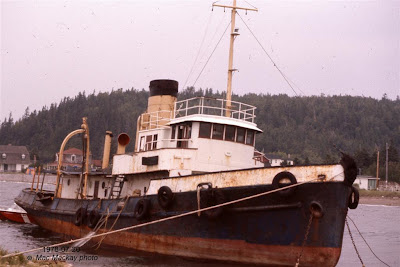 In 1928 the Anticosti Shipping Company commissioned Davie Shipbuilding & Repair in Lauzon (now Lévis) QC to build a modern seagoing tug for their wood operations on Anticosti Island, in the Gulf of St.Lawrence.
This large shipyard (much in the news in 2011 after being rescued from bankruptcy again) was building magnificent cruise ships for the St.Lawrence River, canal freighters and humble dump scows - all at the same time.
The tug was named George M. McKee and its primarily use was to tow bundled wood from various collection points around Anticosti Island to the waiting ship Port Alfred. The ship would then take to wood to the company's mill in Port Alfred for manufacture into paper.
That operation only lasted a few years before other methods were employed, and the tug was sold to Manseau Shipyard of Sorel. Manseau was the ownership vehicle for the Simard family, whose empire included steel fabrication and lucrative St.Lawrence River dredging projects. Manseau eventually became Marine Industries Ltd and maintained a large towing fleet.
The tug was built for icebreaking and was no doubt a useful adjunct to MIL's fleet of many wooden tugs. It was 100'-0" length BP and 26'-0" breadth with a draft of only 10'-0". Also remarkable for a tug of the period, it was fitted with a 700 bhp Fairbanks Morse diesel engine.
Crew accommodation for 13 was below decks forward, and aft over the tail shaft. The deck house was only for galley, mess and heads, with the rest devoted to accessing the huge engine which was 20'-0" long, not including flywheel assembly.
The original small wooden wheelhouse and dodger were replaced with steel one. A captain's cabin and spare cabin were located abaft the wheelhouse. Also a steel bulwark replaced post and wire stanchions on the foredeck.
Following World War II the tug was kept very busy by MIL towing surplus naval vessels to Sorel for layup and eventual demolition. The tug picked up the tows in such ports as Shelburne, Halifax and Sydney, NS.
MIL sold the tug in 1970 to International Diving Centre Inc of Montreal. They renamed the tug Metridia and it was in their ownership when I photographed it at Ile-aux-Coudres in 1972.
In 1976 it was sold again to Navires océanographiques Inc of Rimouski. I last saw it in derelict condition in Bic, QC in 1978, and I assume it was subsequently broken up there.
.
Posted by Mac at 8:51 PM