With a major reconstruction of the slipway at Shelburne, NS, which has been underway for a year or more, the yard's three tug/workboats have been unemployed. SSR 1 appears to be just about completed on its refit, which regrettably has not improved the boat's appearance. 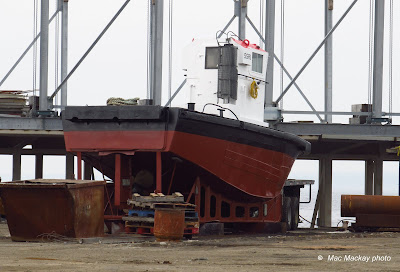 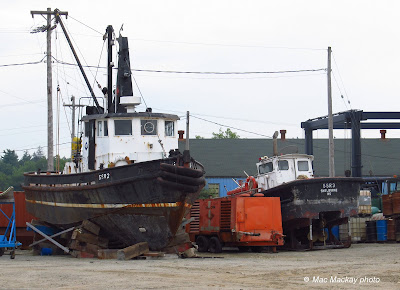 Now that the new cradle nears completion, a refit is underway on the first of the boats. SSR 1, which is not documented under that name, is a former seine boat. When afloat is looks like a raft with an outhouse on it, but it is powerful.
SSR 2, also a former seine boat, and also not documented under that name, still has its original seine boat cabin. It was formerly used by the Steel & Engine Products shipyard in Liverpool (now closed) and was named Stenpro III at that time. A sister boat is till laid up at that former yard, the Stenpro II.
SSR 3 is also an unofficial name. Built in 1964 as Grande Entrée by Ferguson Industries in Pictou, it worked as a dredge tender in the Magdalen Islands. In 1996 it was renamed T.5 and sold to Harbour Development, the Irving dredging operation, arriving in Halifax in November 1996. In 1997 it accompanied the dredging fleet to work in Liverpool. Sometime before 2002 it wound up at Shelburne. Its official name is still T.5.
.