Another of those long lived Russel tugs has changed hands. 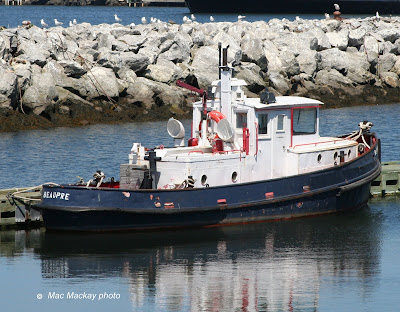 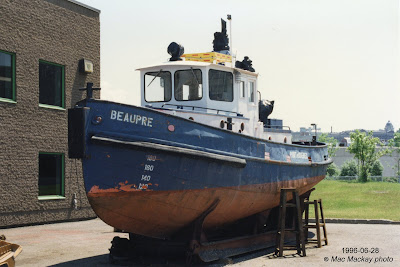 2. Hauled out in Quebec City for refit in 1996, Beaupré shows her traditional hull form. No hard chines or flat plates for this small tug. Also no rolling chocks, evidence that she is meant to work in ice.

Delivered on November 24, 1952 by Russel-Hipwell, in Owen Sound, ON, the tug was originally named W.J.Balcom and was built for the federal Mininster of Transport at Coral Harbour, NWT. That community is on the south side of Southampton Island, which is located in the northern extremity of Hudson Bay. (It is now known as Sallit and is in Nunavut Territory.)
Whether it ever reached Coral Harbour is doubtful, because in 1953 it was reported in use as a pilot boat in Goose Bay, Labrador.
Its original use was probably to assist in landing cargo lighters during northern supply missions, but plans apparently changed.
In 1963-64 it was declared surplus by the MoT and sold to the National Harbours Board. Assigned to Quebec City, it was renamed Beaupré. With the privatisation of ports it remained with the port and was owned by the Port de Québec and finally l'administration portuaire de Québec.
Sometime in the last year I would guess, the tug was sold to 3326405 Canada Inc of Matane, QC and that's where I spotted her July 10.
For more photos and other information see: http://www.russelbrothers.com/
.
Posted by Mac at 8:47 PM