Océan A. Simard on the job - in Baie Comeau 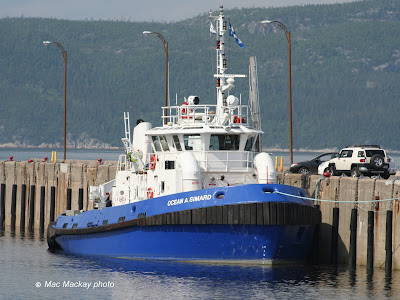 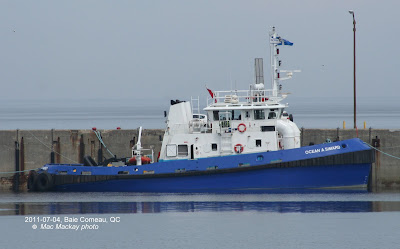 2. Océan A. Simard at the usual tug berth, alongside the government wharf. 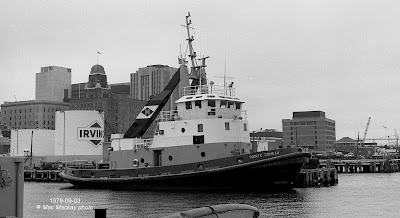 3. Pointe Comeau in her original Ectug livery, in Halifax in 1976. Both tug and waterfront have changed over the subsequent years. Note the dent in the exhaust uptake.

The Groupe Océan tug Océan A. Simard (ex Alexis-Simard of Rio Tinto-Alcan) is now on the job in Baie Comeau, QC.
After an extensive refit at Industrie Océan shipyard in Ile-aux-Coudres, QC this spring, the tug went to Quebec City for a time, but in late June it transferred to Baie Comeau. That port is home to the tug Pointe Comeau, owned by the Cargill Grain Co, but operated under a long term contract with Svitzer. It serves ships at Cargill's grain berths. Now Ocean A. Simard is handling Alcoa's import and export berths.

Interestingly both Océan A. Simard and Pointe Comeau are Voith Schneider tugs, so ship handling will be carried out in the same way for the berthing masters.
Océan A.Simard looks quite splendid in its new Groupe Océan livery of blue hull and white house, with aqaua blue trim, which can only he seen from certain angles.
Pointe Comeau was built in 1976 by Marystown Shipyard and is rated at 3500 bhp.

Note: the above has been edited and corrected thanks to comment received - see below.
.
Posted by Mac at 4:09 PM