Deep-sea British tugs were certainly rare sights in  Halifax. Dutch and German companies had the edge on big deep sea tugs, but there was one large British tug that showed up here. That was in 1977 and it was called the Lloydsman.

Built in 1971 by Robb Caledon in Leith, Scotland a yard noted for its high quality work, and ability to build unusual and unique ships. (They later built the South African giant Wolraad Woltemade). 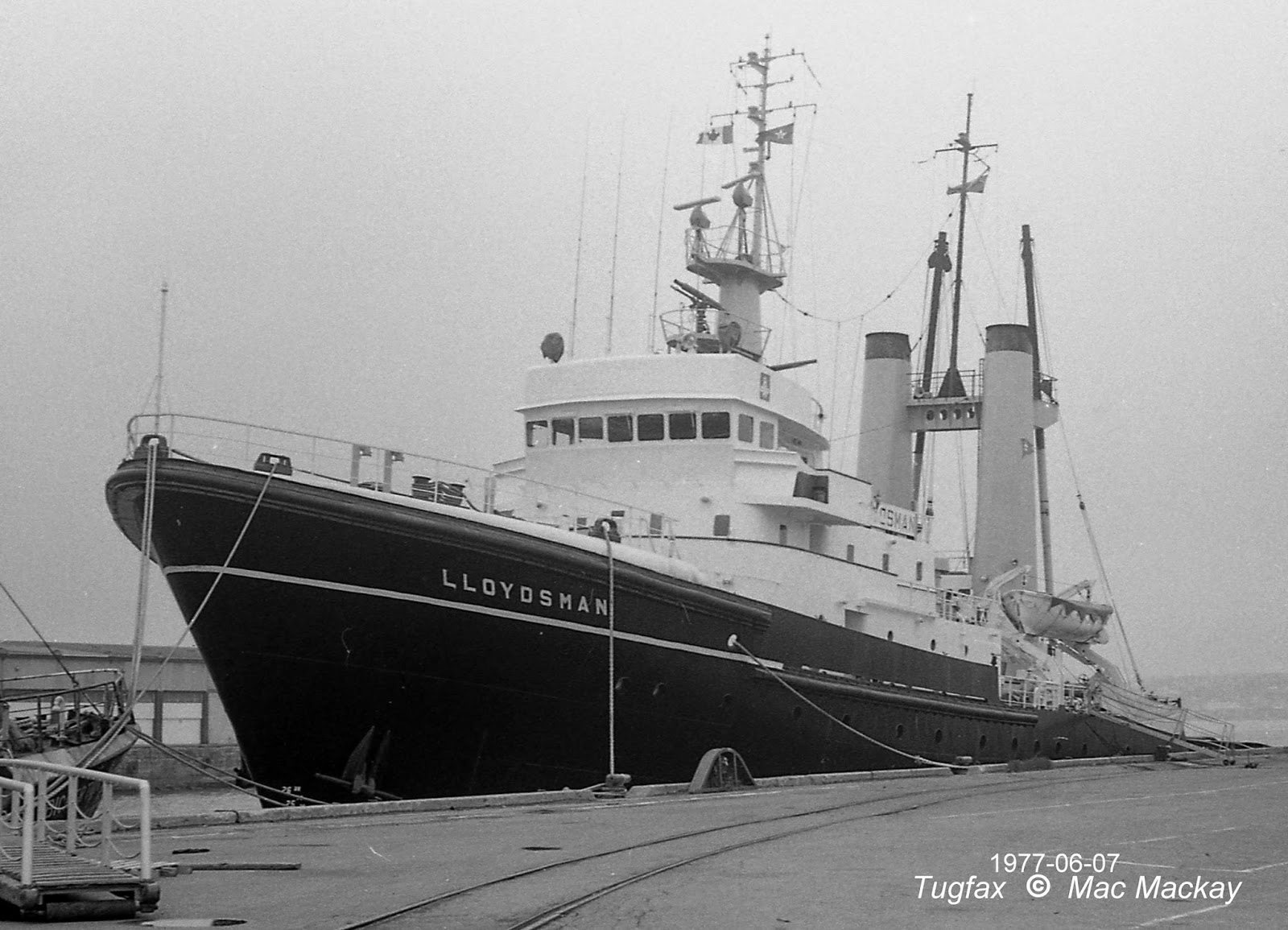 Despite Halifax fog, Lloysdman was highly visible at pier 31.


Lloydsman was certainly unusual and unique. Designed by Burness Corlett Partners (developers of the Hydroconic hull) it was meant to go head to head with the big tugs of Smit, and Bugsier. With a displacement of 3100 tons it was a very big tug indeed (2041 grt). Powered by two V-10 Crossley-Pielstick engines of 5,000 bhp each, it was driven by a massive 17 foot diameter Ka-Me-Wa controllable pitch prop in a Towmaster fixed nozzle. The Towmaster system included five rudders (called vanes) two forward of the nozzle and three aft. It provided superior turning ability and improved thrust. Bollard pull tests returned 150 tons- claimed to be the best certified rating in the world.(The Dutch and German tugs apparently marketed their tugs based on calculated bollard pull, rather measured bollard pull.) The tug also had a free running sped of an amazing 18.6 knots, thanks to a fine hull form and bulbous bow.
It was outfitted with all sorts of gear, including two towing winches, two derricks and significant fire fighting capability, including a pumping capacity of 1160 tons per hour. Everything on it was big and first class.

The tug was owned by United Towing Ltd of Hull, and managed by their local tug company Humber Tugs Ltd. They ordered Lloydsman in response to the need to tow large ships, "supertankers" a term tysat was ever expanding well beyond the once unthinkable 100,000 dwt mark. Tankers of  300,000 dwt were calling in British ports and there were no large British tugs to tow them if needed. 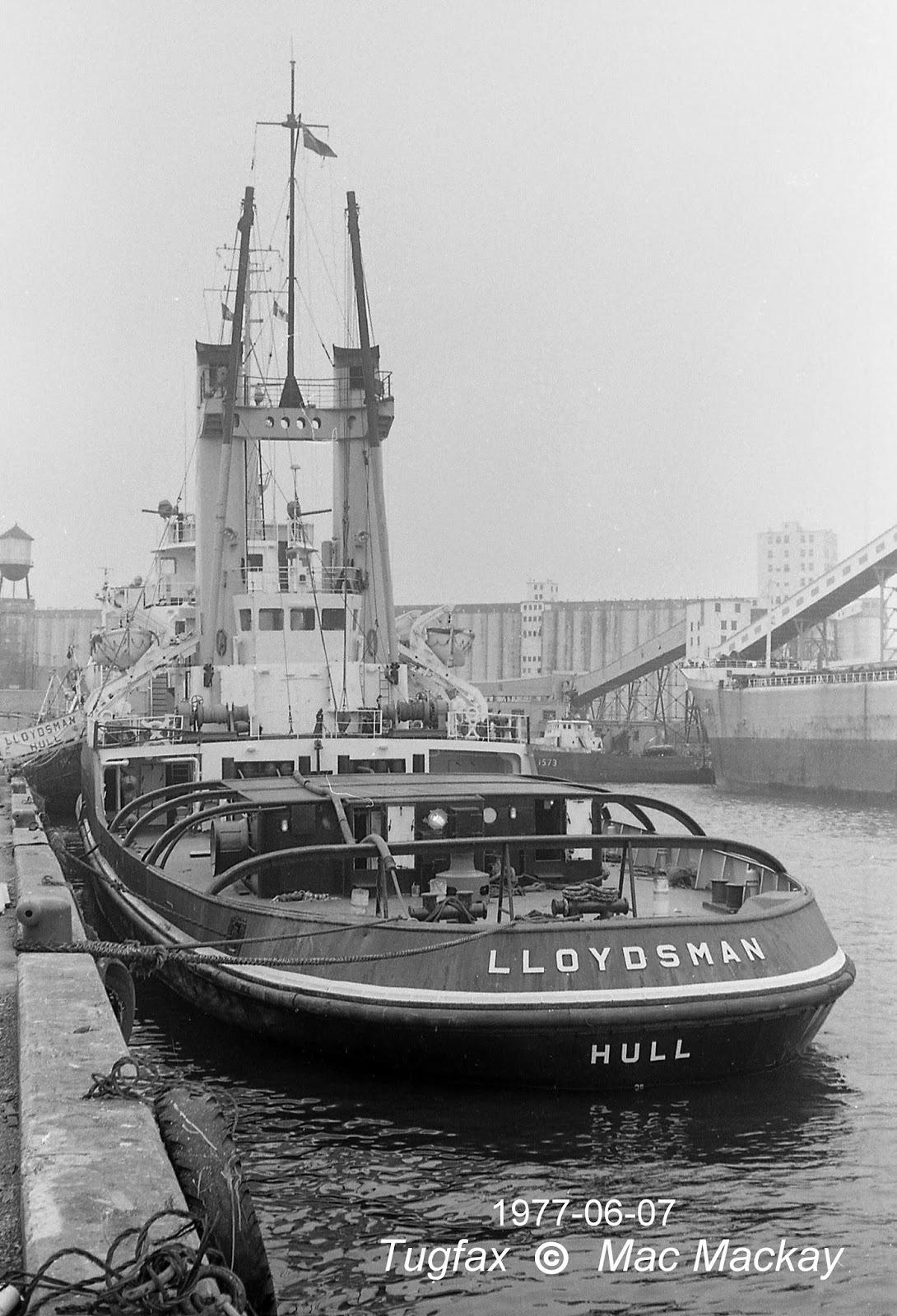 Everything on the tug was large and heavy duty.

Lloydsman did participate in some very long/large tows. One was towing the giant Venpet with a huge hole in its side. The result of a collision with sister ship Venoil off Cape Town, when the two masters decided to exchange greetings at close range, the incident became known as the million dollar handshake. That tow from South Africa to Nagasaki was punctuated by a one week lay over in Jakarta for engine repairs to the tug.

While Lloydsman did tow other big ships and oil rigs over long distances, it was in an entirely different role that it made headlines and became a favourite of the (British) public. Since the 1950s Britain and Ireland had been skirmishing over fishing rights in the waters near Iceland. There was a "Cod War" in the late 1950s and another in the early 1970s, but it was the Third Cod War from November 1975 to June 1976 that caught the public's attention. Iceland declared a 200 mile protection zone and Britain announced that they would not respect it. They sent warships to protect British trawlers fishing in the area, and they sent Lloydsman and two offshore suppliers from sister company Star Offshore Services. It was their job to get between British trawlers and Icelandic patrol boats to prevent them from cutting trawl wires. There was much dramatic activity and many close calls and numerous incidents of contact. At one point Lloydsman came under fire and impacted a light Icelandic gunboat while trying to prevent a boarding party from going aboard one of the suppliers.

The was all over when Lloydsman made its first and only appearance in Halifax in June of 1977. It was here to tow the oil rig Sedco J to the North Sea.  Before doing that however it towed the oil rig Sedco 709 back into port from trials in St.Margaret's Bay. It may have been subcontracted to Smit-Lloyd for this work, since their tug/suppliers were also in Halifax at the same time, and it was Smit-Lloyd 106 that towed Sedco 709 to the North Sea. Sedco J was unpowered, whereas Sedco 709 had propulsion thrusters. 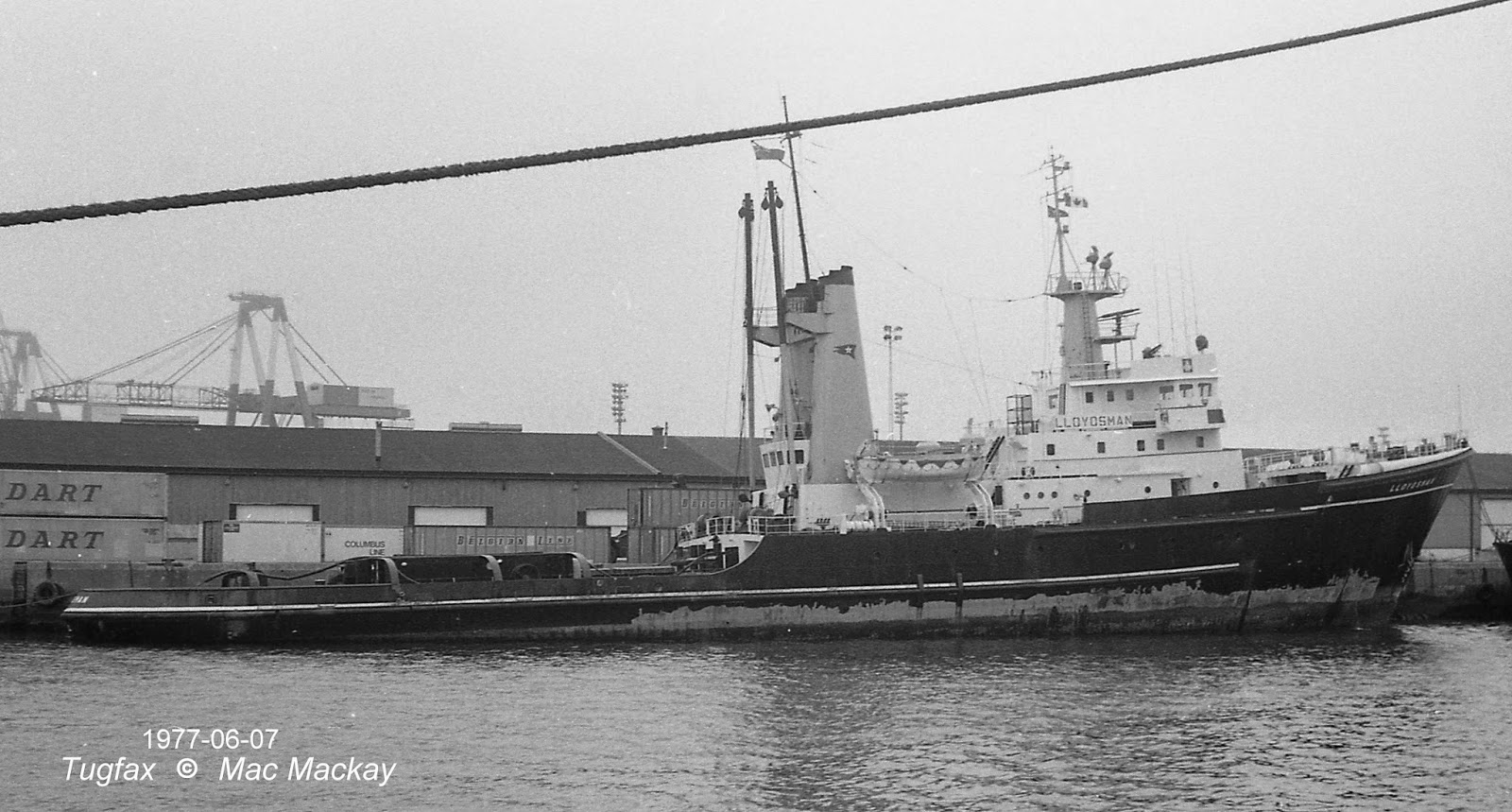 Despite having no shear to speak of the tug exuded power.


An expensive tug to operate, and facing stiff competition from the Dutch and Germans, United decided to built a replacement and sold Lloydsman to the Singapore based Selco Salvage in 1980. With Selco, and renamed Salviscount,  it was used to tow large ships to scrap yards in Taiwan. On one particular tow of two VLCCs from Maracaibo to Kaohsiung, they were at sea for 173 days, at an average speed of 3.25 kn and covered 13,500 miles via the Cape of Good Hope. (The ships were too big for the Panama Canal.)

Unfortunately Selco was in deep financial trouble and it went under in 1986. A reorganized company named Semco was set up to take over Selco's assets, but they did not include  Salviscount. Sadly it was laid up and sold for scrap and arrived at Gadani Beach on March16, 1988.

Various reasons have been given for the tug's demise, one being that the tug had been poorly maintaine
d, and that its engines had become unreliable. The other was that it was too costly to operate. Even though it could run on one engine, and usually did unless full power was needed, other tugs of the class were powered by four engines and had better versatility. Another was that the need for these huge tugs had diminished, with heavy lift submersibles, wet tows were becoming less common and the work was not there anymore.
Whatever the reason, it was a shame to see such a magnificent tug go to the scrappers after only 17 years of service.