It has been some time since a Svitzer tug tied up at the Svitzer dock in Halifax. Since Svitzer and Atlantic Towing Ltd formed their partnership for tug service in Halifax, all tug work here has been done by Atlantic Towing and all tug work in the Strait of Canso by Svitzer.
Today's arrival is not a tug for Halifax however. After some preparation work, the tug will be assigned to Port Cartier, QC where it will assist the tugs of ArcelorMittal in ship berthing at the busy iron ore and grain port. 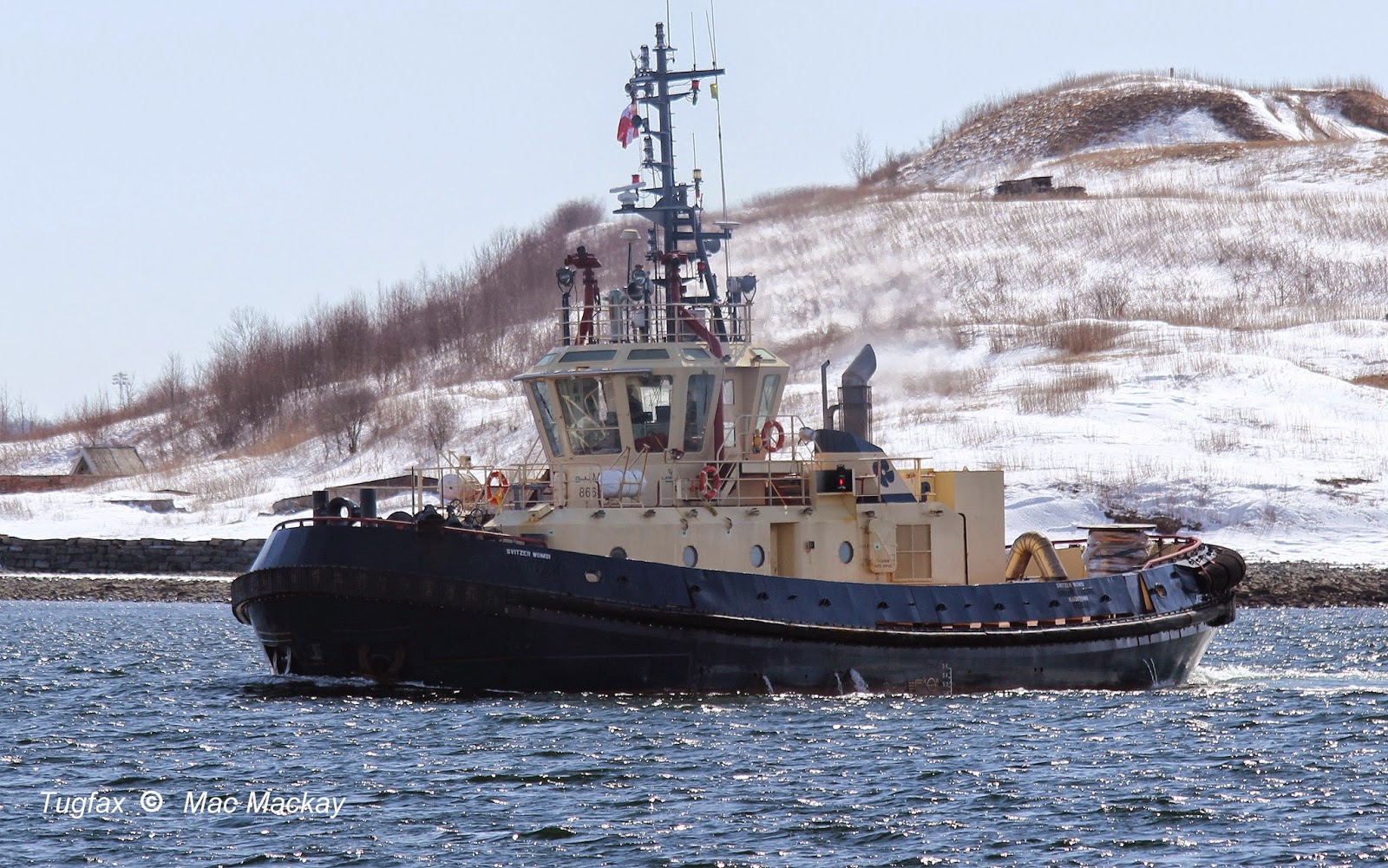 The tug will be renamed Svitzer Cartier when it is registered in Canada, but it arrived as Svitzer Wombi, reflecting its brief connection with Australia. Svitzer is a worldwide operation, and last year its busy Australian branch acquired three Chinese tugs, built in 2007, for service in Australia, however one of them, built as Hai Gang 107 was specially refitted for service in Canada. That work included strengthening for work in ice. 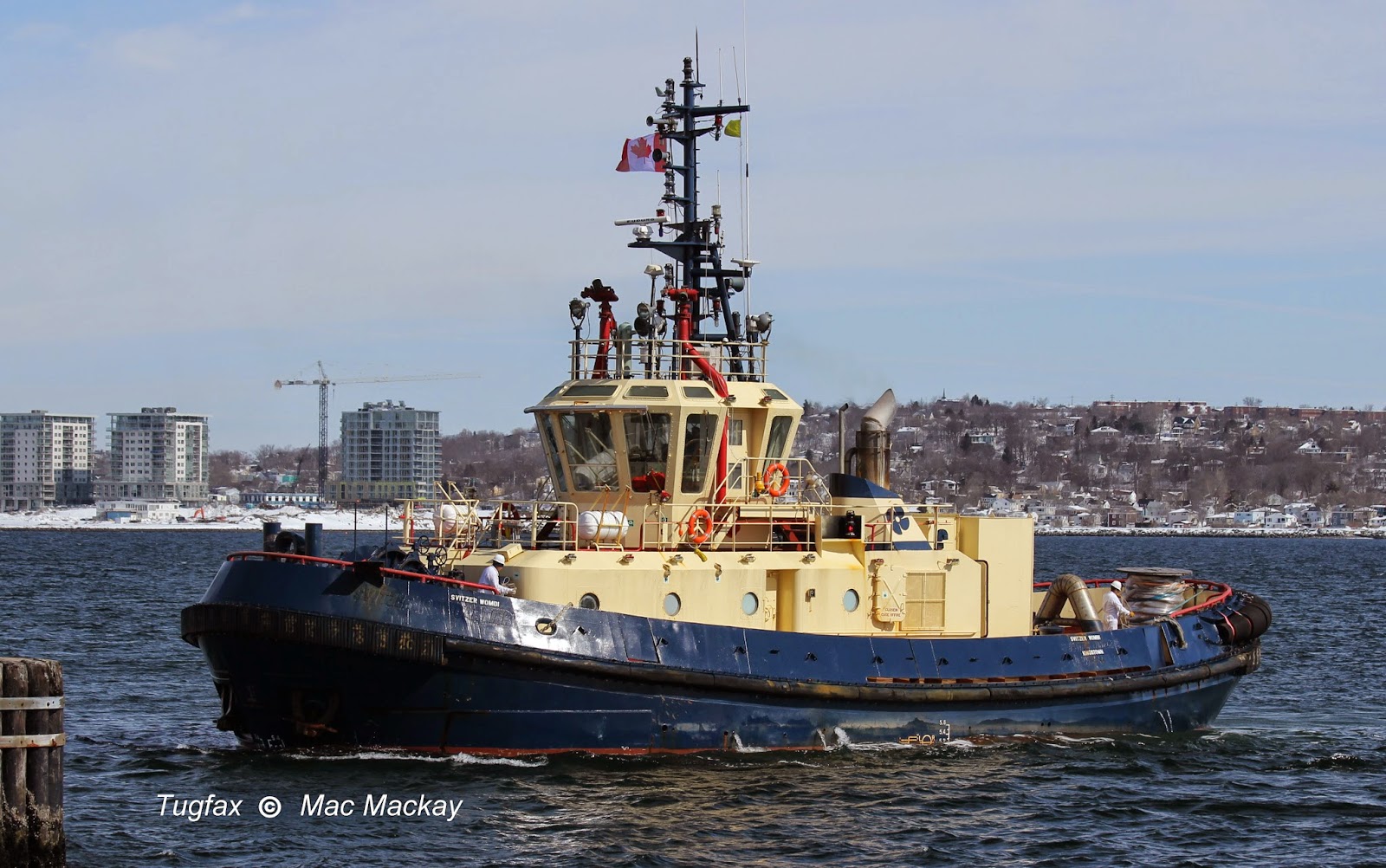 Svitzer Wombi makes it approach to the Svitzer wharf. Just visible near the bow is some extra hull plating for work in ice.

Renamed Svitzer Wombi, and flying the flag of St.Vincent and the Grenadines, the tug made its way under its own power across the Pacific to the Panama Canal, March 13, then to Bermuda, March 26,  arriving here just this morning. 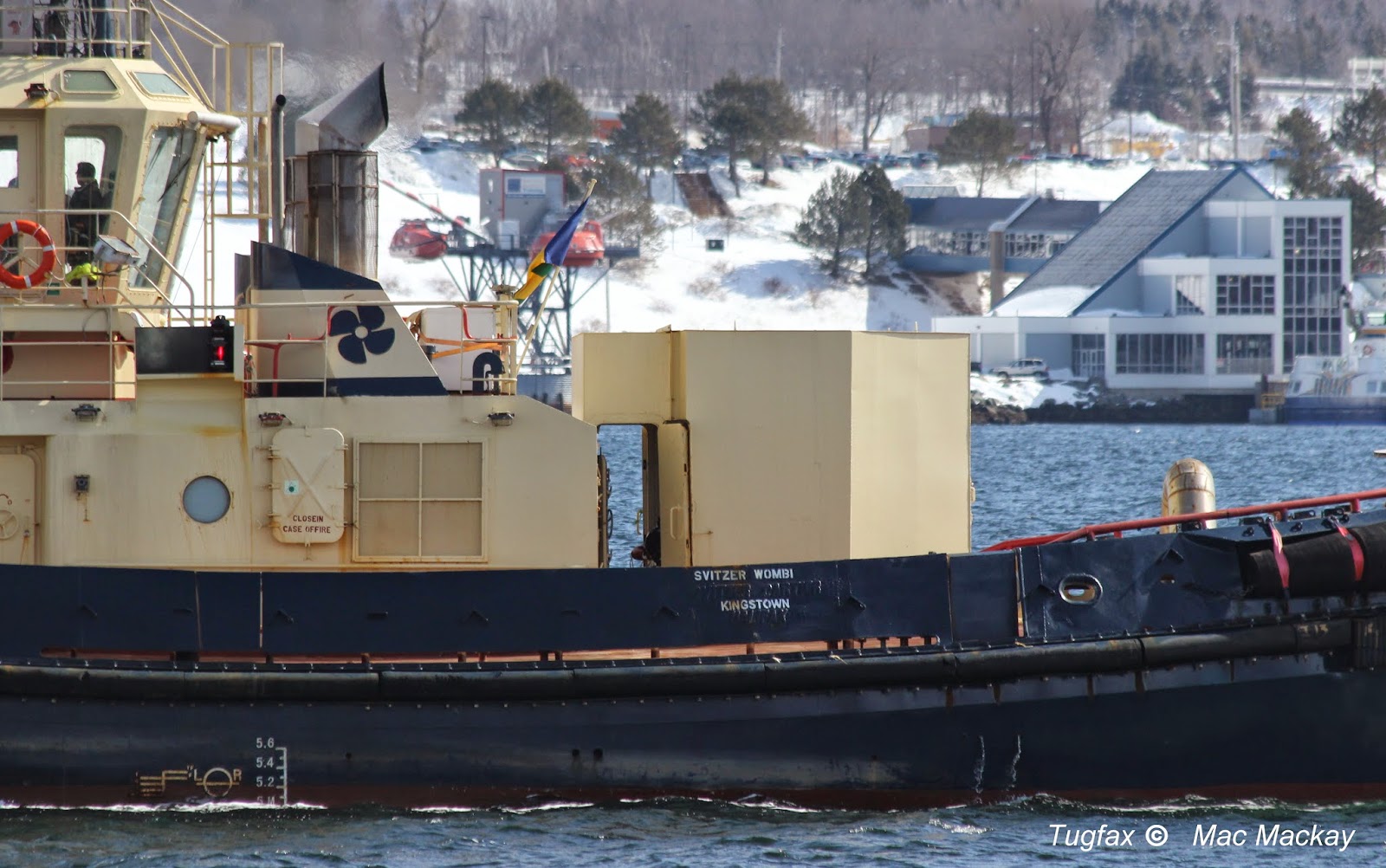 For the trip from China, a temporary structure was built over the shipberthing winch, with watertight doors to the accommodation. The Pacific is noted for its following seas, and this added protection was a necessary. There was also a reel of towline lashed to the stern rail. 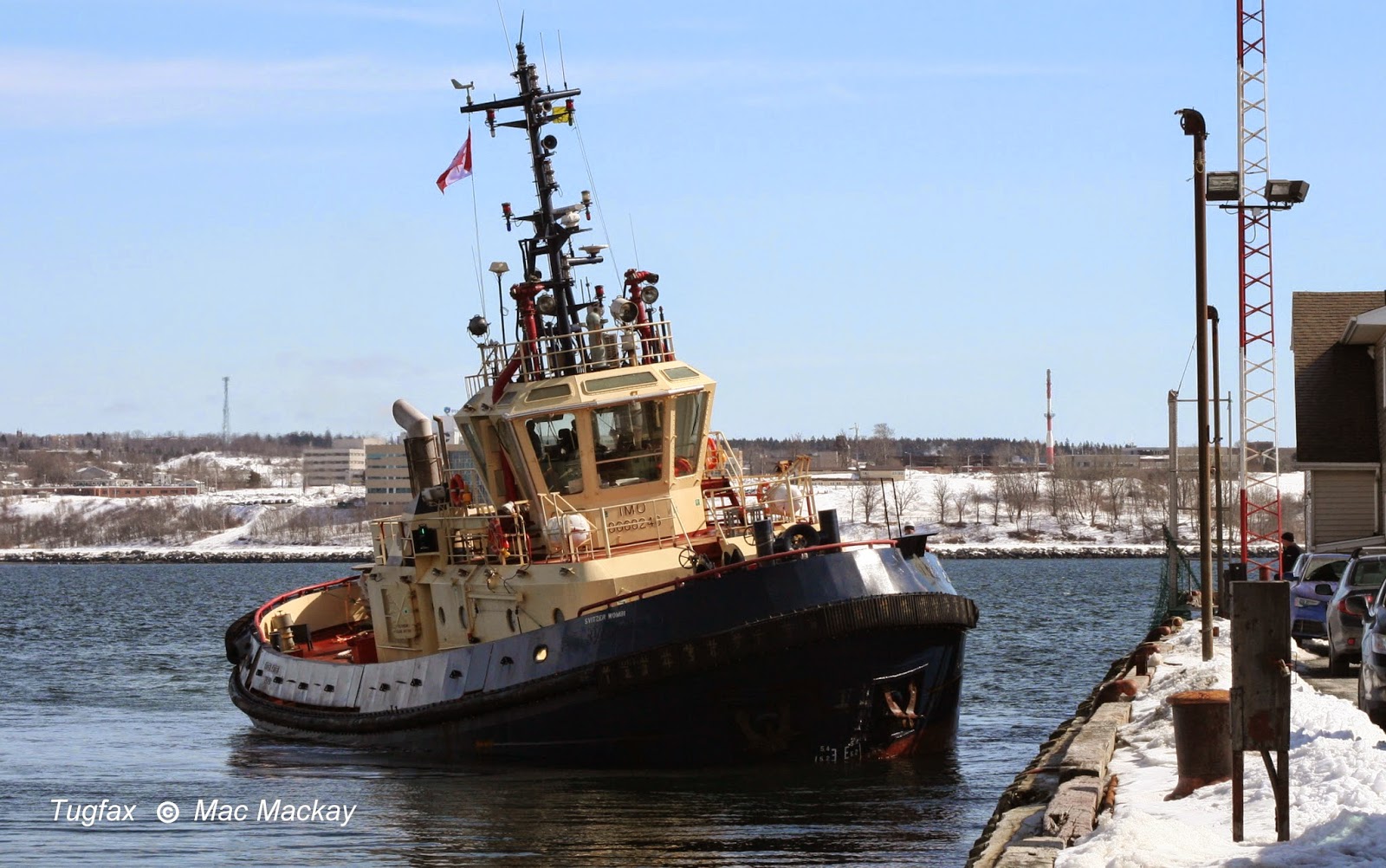 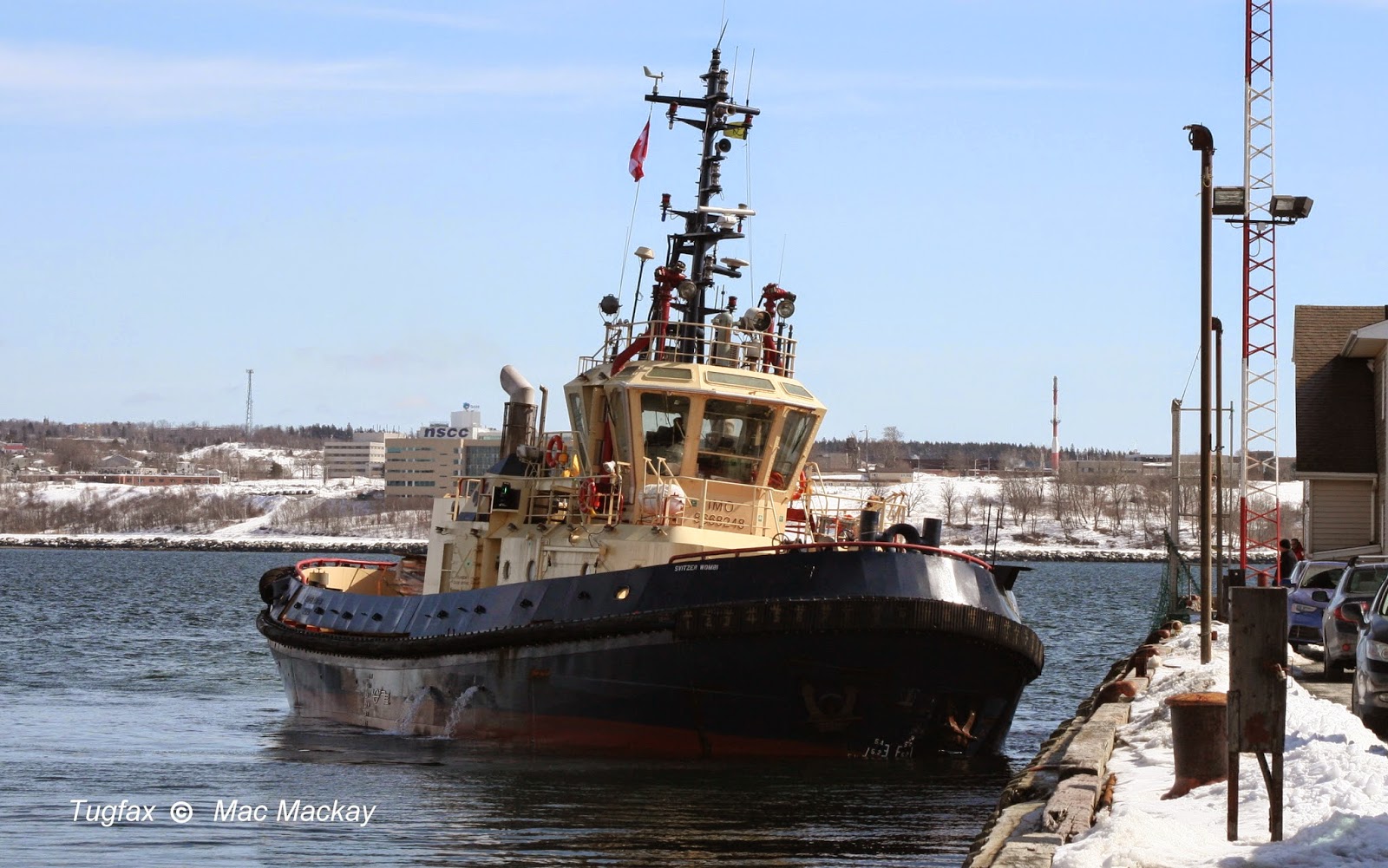 The tug took several vicious rolls as it tied up, no doubt due to its being light in fuel, but also to a tendency in Voith-Schneider tugs to wallow when the drives are not synchronized.

The tug is a Voith-Schneider type, which is the same type as the two ArcelorMittal tugs in Port Cartier, Brochu and Vachon. This will allow docking masters to use the same maneuvers in the tight dock spaces, keeping the tugs alongside and pushing latterly when needed. The existing tugs, built in 1973, have 3600 bhp.
Svitzer Cartier is rated at 5400 bhp and 56 tonnes bollard pull. Its greater power is also needed to handle the ever larger bulkers that are loading in Port Cartier. 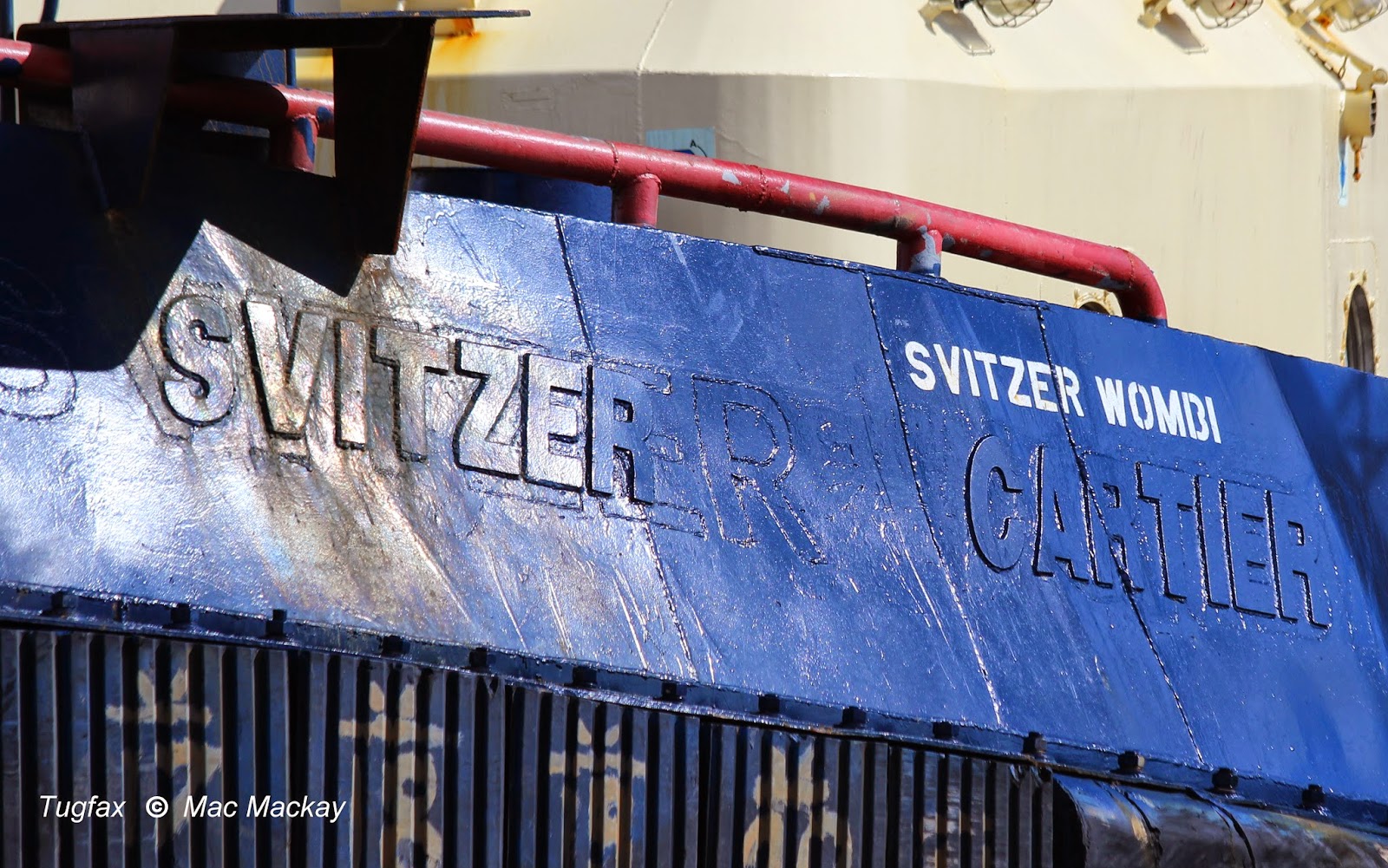 The letters for the tug's new name have been welded on but not painted yet. And you can see the Svitzer Wombi outline in welding bead beneath them. The name Svitzer Wombi stencilled on in small letters sufficed for the delivery trip.
The tug will remain in Halifax for compliance work and inspection for Canadian registration before sailing to Port Cartier to take up its duties, on what I hear is a two year contract..