Two former Dutch tugs made visits to Halifax - one short and one prolonged, but they had similar histories. 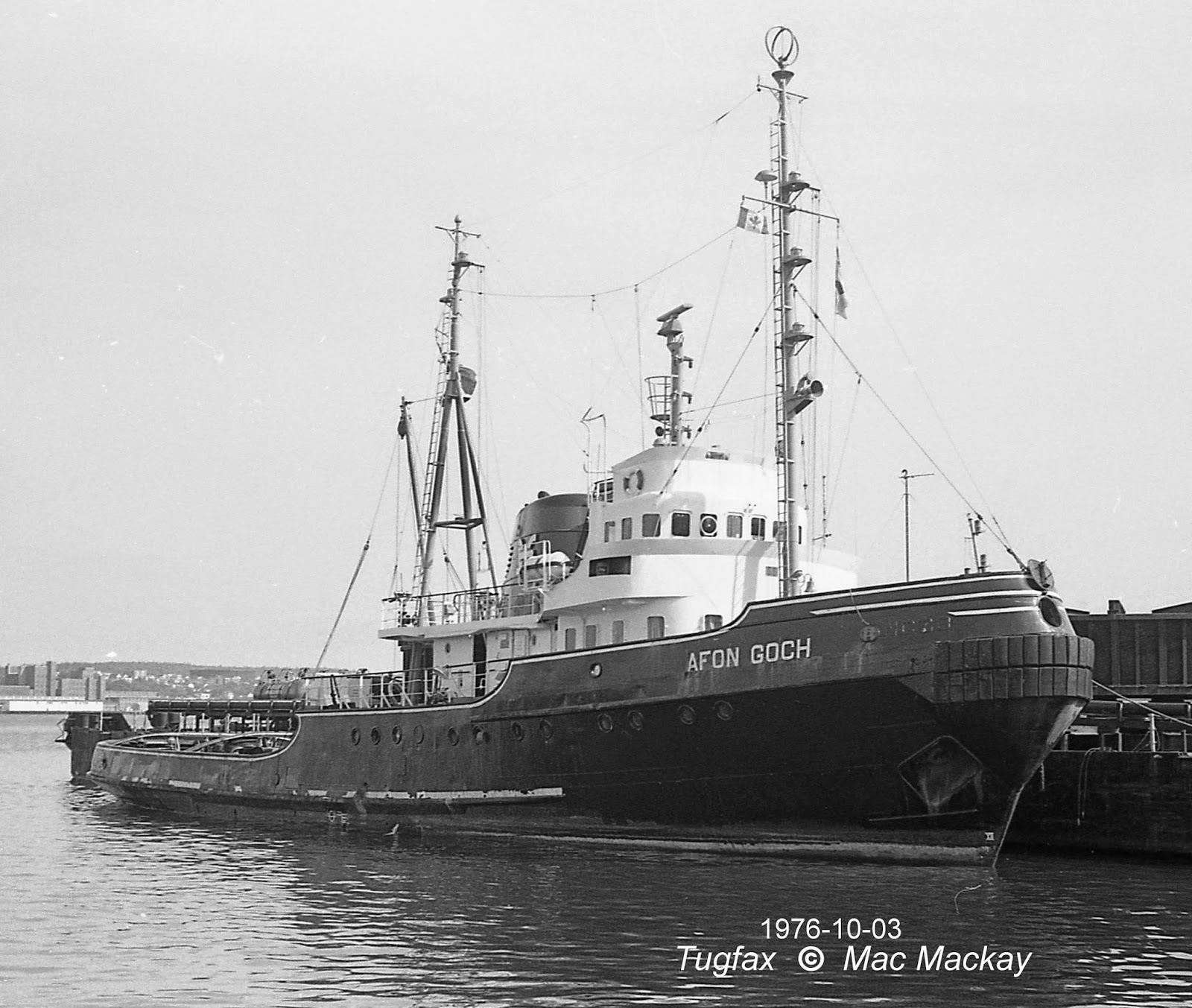 Afon Goch in Holyhead Towing colours, tied up at ECTUG with the barge Mulus 4.

The first arrived carrying the Welsh name Afon Goch, and wore the funnel mark of Holyhead Towing Ltd, a company which was then associated with the Dutch tug operator Smit International.
Afon Goch was built by the J+K Smit yard in Kinderdijk in 1958 as Schelde for L.Smit + Co Internationale Sleepdienst, later transferred to Smit International (Antilles). Principal dimensions were 423 grt and 146'-5" loa. It was a diesel-electric tug with three 8 cyl KHD engines driving a single screw. It was rated at 3,000 bhp and was built as a salvage tug for the Hoek van Holland station.It had a "river" name, meaning that it was a smaller class of tug than the larger "Zee" types.
In 1967 it was repowered with three 6 cyl Kromhouts, still working through electric motors.
In 1976 it was assigned to Holyhead Towing Co Ltd of Beaumaris, Wales, working through their Risdon Beazley Marine Ltd subsidiary and renamed Afon Goch.[translated from the Welsh: Afon=River, Goch= Red] 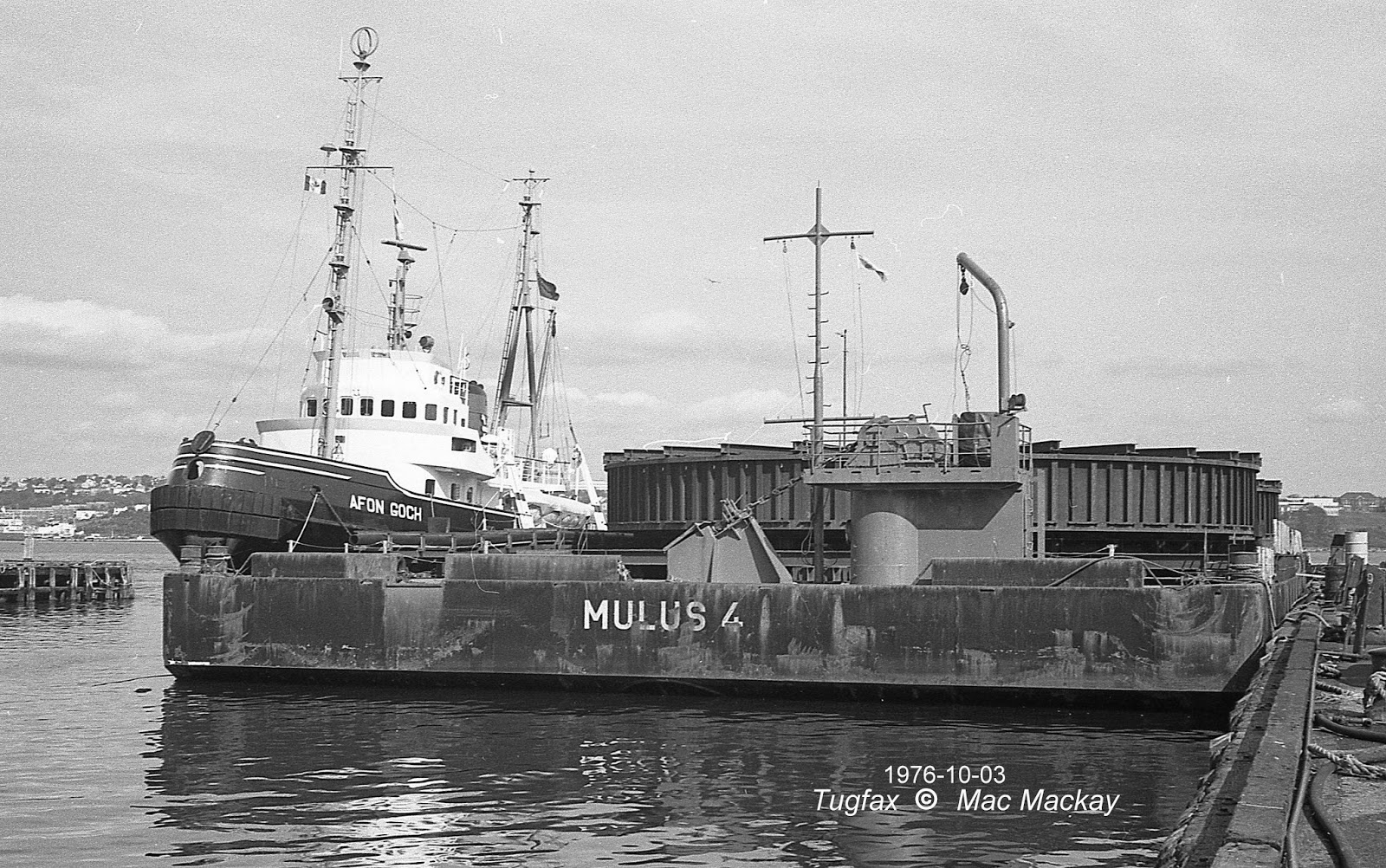 Its arrival in Halifax in March 1976 was towing the big pontoon Mulus 4 carrying cable lay gear. The barge was to place two electric power cables between New Brunswick and Prince Edward Island. After fitting out in Halifax with additional gear, the barge was handled during the actual laying operation by the two tug suppliers Smit-Lloyd 51 and Smit-Lloyd 52 .

More equipment was mounted on the barge in Halifax to allow it to lay the cable. Once the work was completed, the barge returned to Halifax to be de-mobilized. 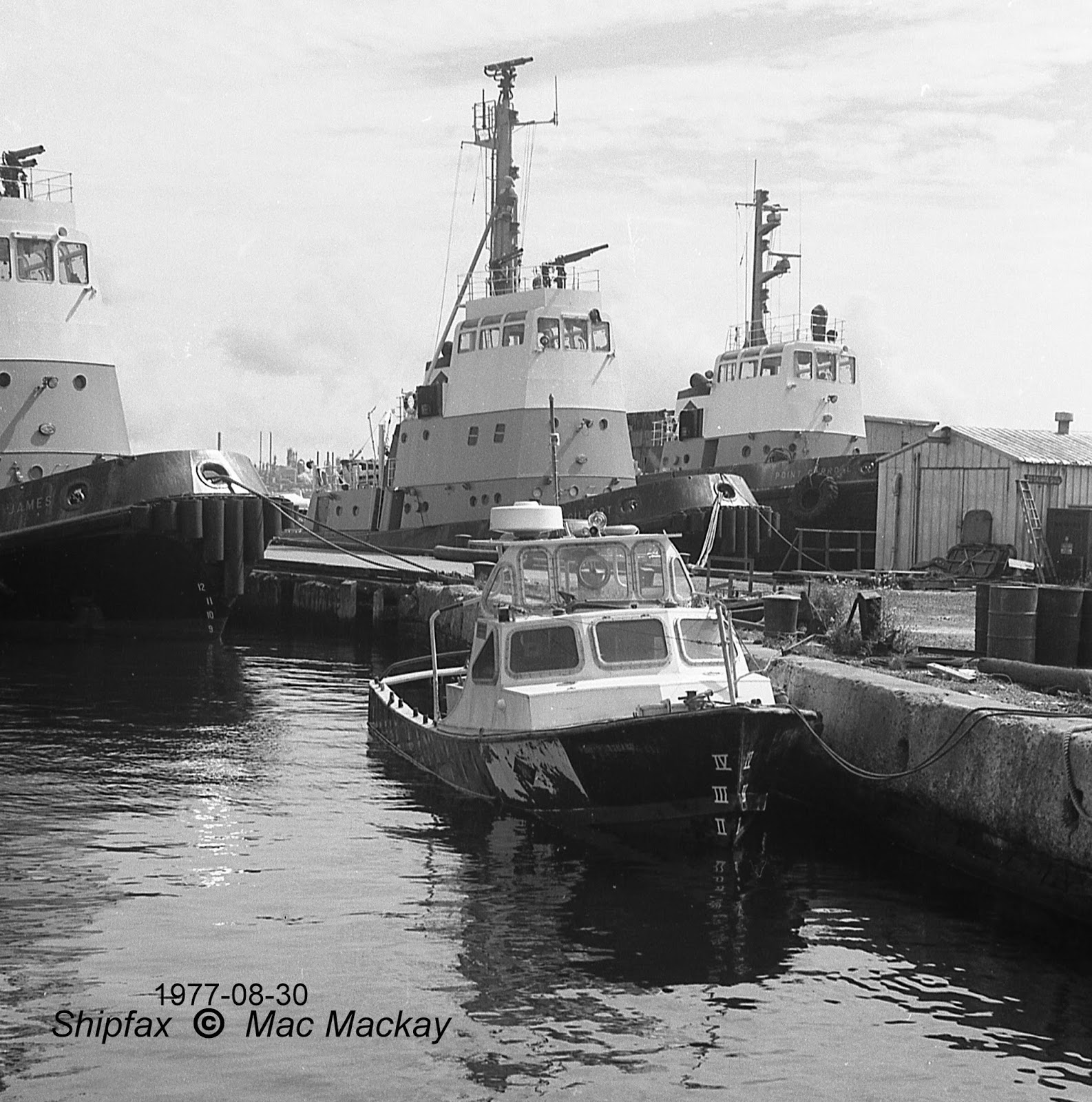 Also involved in the cable project was ECTUG's smallest tug, acquired especially for the job. Point Vanguard was the former CG 112 an aluminum workboat with 400 bhp and two screws. It was sold after completion of the project.

In 1979 the Afon Goch was returned to Smit and worked under Antilles and Panamanian flag until sold in 1980. New owners Deep Venture Ltd renamed the ship Golden Venture and converted it to a diving / treasure hunting vessel. [see note 1]
In 1984 it became Corwin for New Frontier Towing + Salvage Ltd, still under Cayman  flag.
It then moved to US owners Texas TxTx Marine Transport Inc, and hoisted the stars and stripes as TxTx Star. The owners became simply TxTxStar Ltd in 1989 and the tug returned to Cayman flag, and was again renamed in 1995 as Texas Star. [see note 2]
My files indicate that it was gutted by fire May 31, 1990 in Houston and became a total loss. Its listing in Lloyd's continued until 1999 when it was deleted. [see note 3]

Supplementary info received:
1. As Golden Venture it was involved in recovering artefacts from Nuestra Senora de Atocha for Marine Resource Development Foundation. See: Wikipedia
2. A deal to transport aggregate by barge from Jamaica to Houston fell through.
3. After the fire in Houston the tug was a constructive total loss, but remained laid up, finally sinking at its berth in 1994. It was subsequently raised and broken up at an unknown location.


The next arrival in 1978 was built as Smit's Tasman Zee It was also built in 1958 by Smit's yard in Kinderdijk, but was larger at 526 grt and 151'-6" loa. Power came from 4 cyl KHDs. Two were reversible and two non-reversible,  with magnetic couplings to the two screw shafts. There props were also fitted wit nozzles. In 1967 it was also re-engined, but with two 8 cylinder Kromhouts and fluid coupling.

Used for deep sea towage and salvage, it was transferred to Holyhead Towing in 1977 to replace Schelde / Afon Goch and was renamed Afon Wen.[from the Welsh Afon = River, Wen = White]. 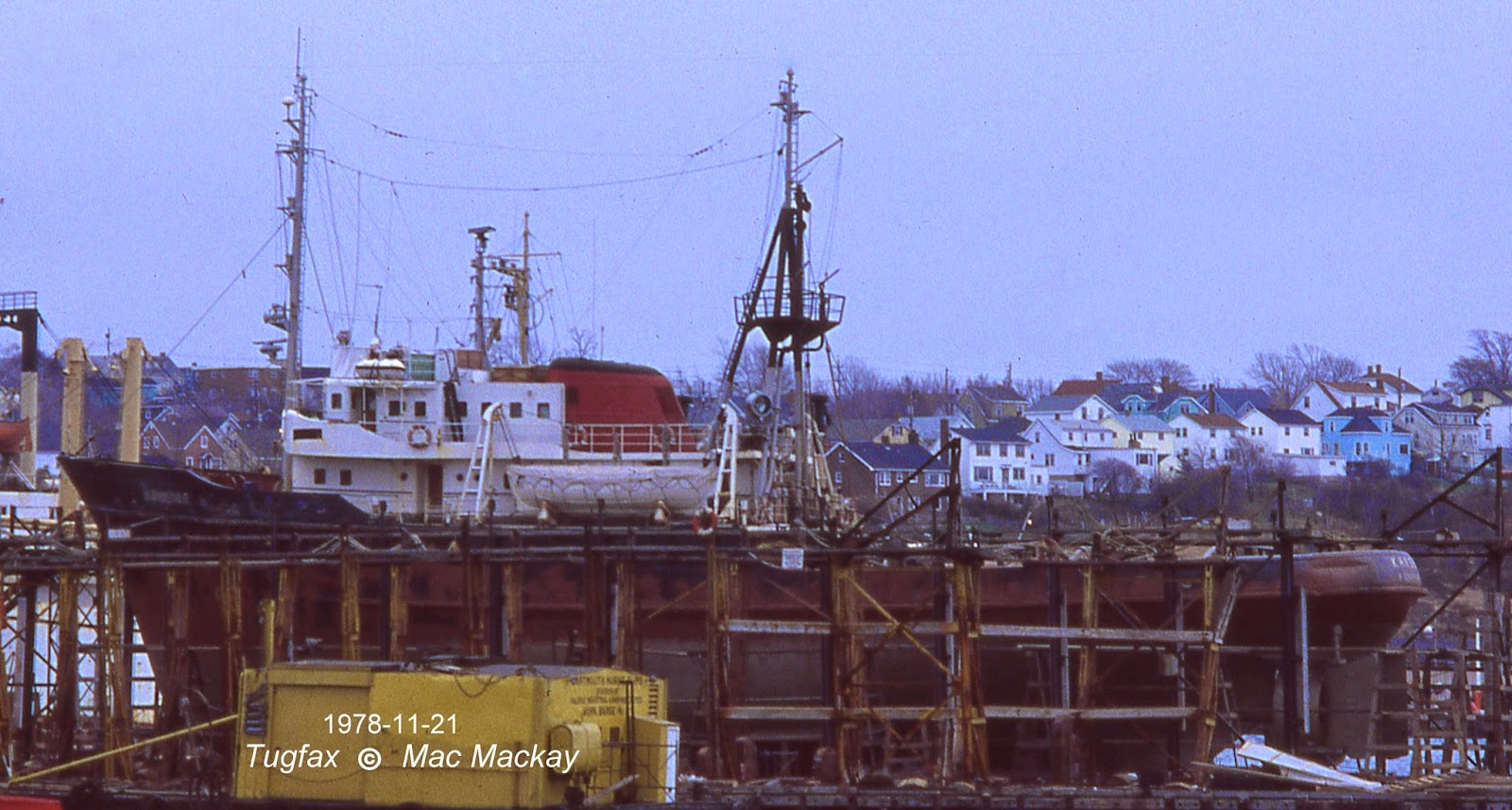 Karob on a cradle at Dartmouth Marine Slips.

After only one year it was sold to Trix Enterprise Inc SA  and renamed Karob. It arrived in Halifax under that name for a refit at Dartmouth Marine Slips. There was some mystery surrounding its arrival, and it certainly spent a long time after drydocking before it finally sailed. 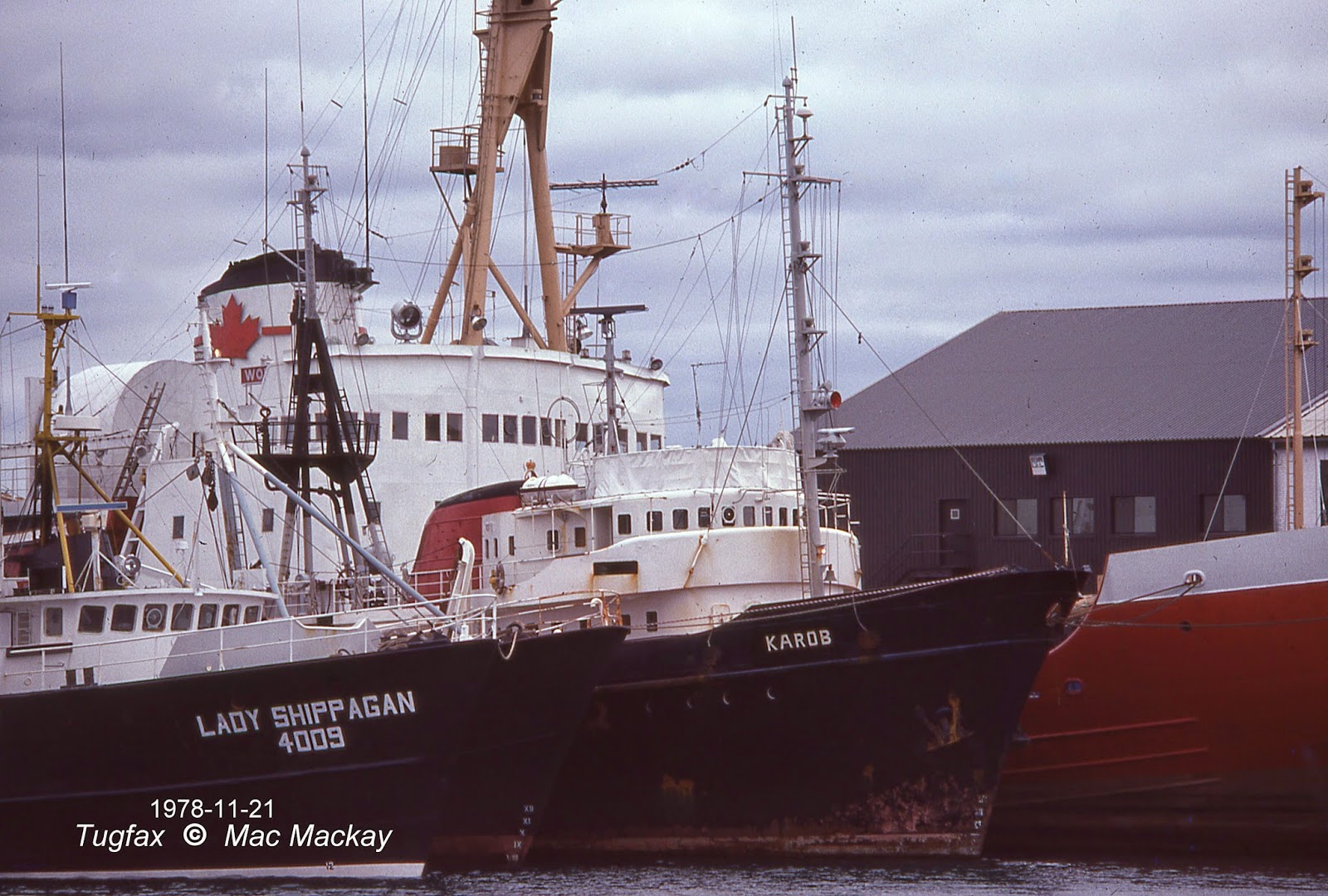 Wedged in between the trawler Lady Shippagan and CCGS Wolfe, Karob lay idle over the winter of 1978-1979. 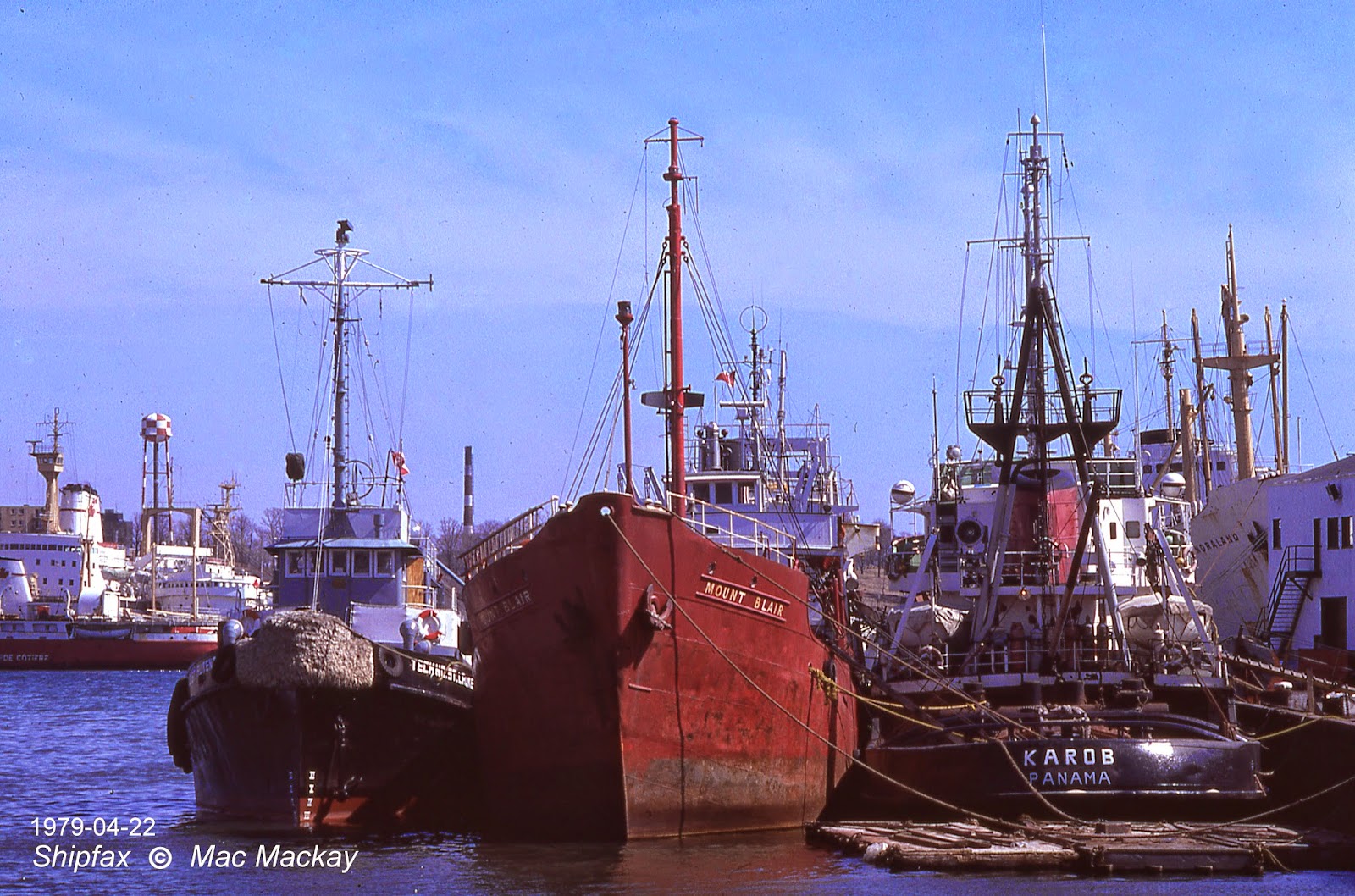 By spring Karob was on the inside berth with the tug Techno-St-Laurent (ex CFAV Riverton) and the ancient coaster Mount Blair. However it is showing fresh paint.
[Can you wonder why Halifax Harbour is a little boring these days compared to 1979?]

The tug lay over for the winter, and in May it did harbour trials, but went back alongside until trials again June 29 when it sailed. 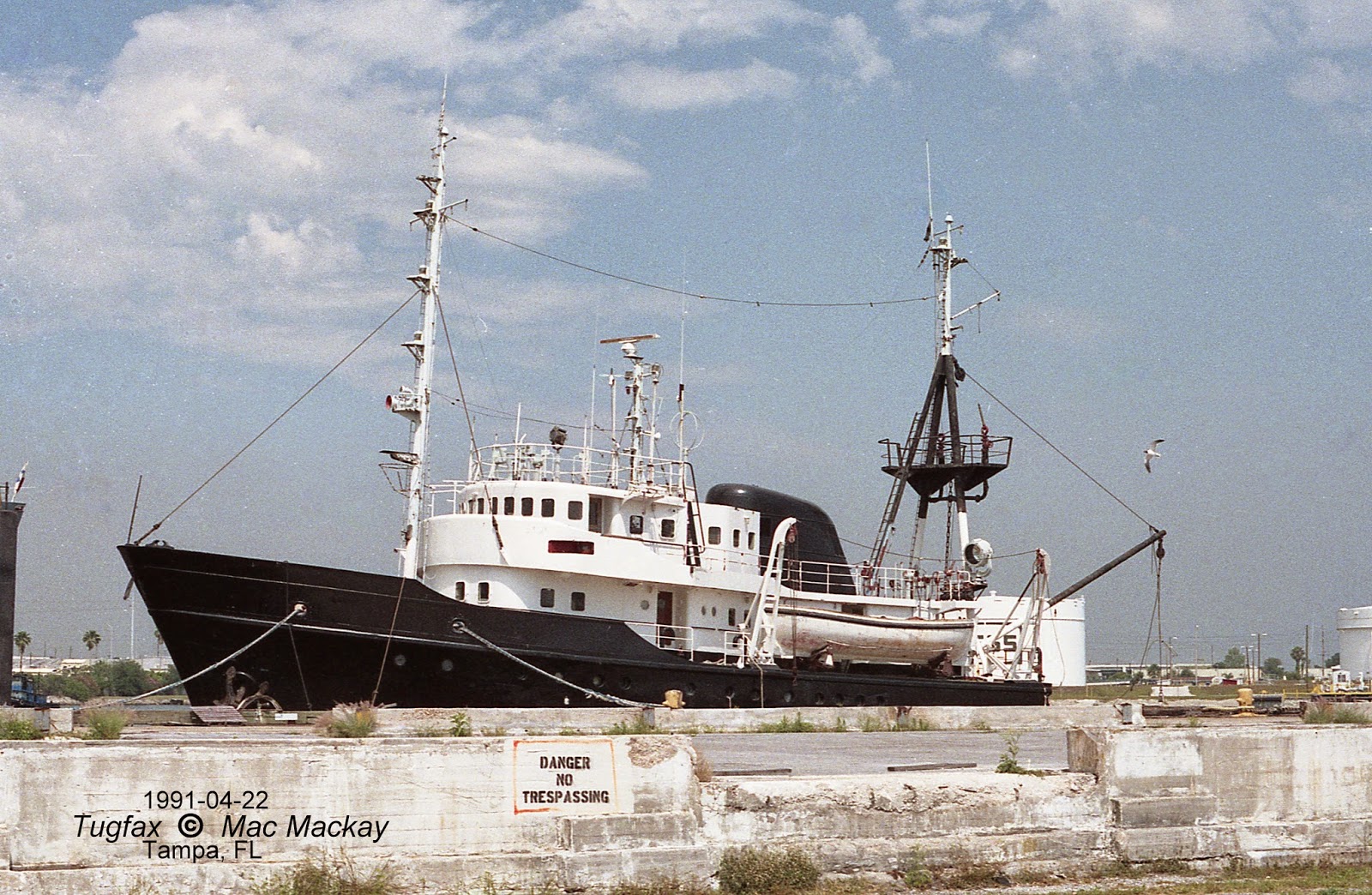 Although I couldn't get a close up view (see sign) I did see Resolve in Tampa in 1991, and it appeared to be in good condition. Its name was painted out on the port bow, but was still there on the starboard.

The tug was sold again in 1991 becoming the Honduran flagged Tiburon Listo for Ready Shark Investments of the Marshall Islands.It is still being listed, but it is doubtful if it would still be operational after all these years.

Supplemental info received:
1. As Tiburoin Listo the tug's ownership was divided among several persons, but apparently all lost their investment when the tug found no work. It was laid up at Jacmel, Haiti and may be there yet.