French tugs were almost as rare as British tugs in the Halifax area. Aside from the Ryan Leet (the former Abeille Provence) and Magdalen Sea (ex Abeille Normandie, since sold) acquired by Secunda Marine in 1990, and the occasional French navy tug from the St-Pierre patrol, I can only think of two other French tugs that I have seen in these parts.

The frist was the legendary Abeille 30. Owned by "Les Abeilles" [translation:  the bees, but there is more -see footnote *] it also belonged to a legendary company. Tracing its roots to 1864  la Compagnie de Remorquage "Les Abeilles" of Le Havre grew to serve most French ports and overseas colonies, and in 1964 was styled Société de Remorquage et de Sauvetage "Les Abeilles". In 1967 a Marseilles based holding company Société de Gestion Maritime [abbreviated as PROGEMAR] owned all the various port operations and the deep sea towing and salvage operations of Les Abeilles. Unfortunately the name Abeille has virtually disappeared from the seas since the publicly traded agri-food company (Groupe) Bourbon took over ownership in 1996. Two large emergency rescue tugs still carry Abeille surnames. Abeille Bourbon and Abeille Liberté are worthy successors to the Abeille tradition, but they may be the last.

Abeille 30 arrived in Halifax from Montreal towing the Algerian cargo ship Biban. The ship had a main engine breakdown in Duluth, MN in June of 1979 and was towed down through the Great Lakes by the Great Lakes Towing tugs Carolina, Maryland and Superior, assisted by Lenny B, arriving in Montreal July 29. That was close to home for the ship - it had been built at Sorel, QC in 1977 by Marine Industries Ltd as one of their Marindus class. Measuring 12,919 grt it was a general cargo ship owned by the Société. Nationale de Transport Maritime + Cie Nationale Algérienne de Navigation Maritime.

It was not until December 11, 1979 that the tug Abeille 30 towed it away from Montreal. At some point the tow line parted in the Gulf of St. Lawrence, but the ship was retrieved after some time adrift. Some damage resulted, necessitating a stop over in Halifax, arriving December 21.


The tug topped up its fuel tanks at Texaco, and the Biban entered the floating drydock Scotiadock (i) at Halifax Shipyard on December 24. It was back out and alongside pier 6 by December 31 and itself was took bunkers early in the morning of January 1, 1980.
At 1045 hrs January 1, 1980 the Abeille 30 towed Biban away to Hamburg for permanent repairs.
The ship was sold in 2002 becoming Miriam 1 for the trip to Alang where it was broken up.

Point Vim, Point Vigour and Point Viking (one is on the other side) assist the two in getting away.

Abeille 30 was built in 1944 by Levingston Shipyard in Orange, TX as LT-535 for the United States Army. In 1948 it was purchased by the Hong Kong based Moller Towages and renamed Margaret Moller, and was sold to Les Abeilles in 1951 becoming Abeille 10. A single screw tug, it had two V-12 GM engines driving electric motors for about 1900 shp.

Just when an owner might think about selling an older tug such as this, Les Abeilles instead gave it a major rebuild in 1972. Modifications to the stern and superstructure, topped  a pair of new V-12  Société Alsacienne de Construction Mechanique (SACM) main engines Rated at 5200 bhp (some say 6200 bhp), through a controllable pitch prop and Towmaster nozzle and rudder system. With a very respectable speed of 14.5 kn, it was fitted with complete salvage gear and classed as a salvage tug. 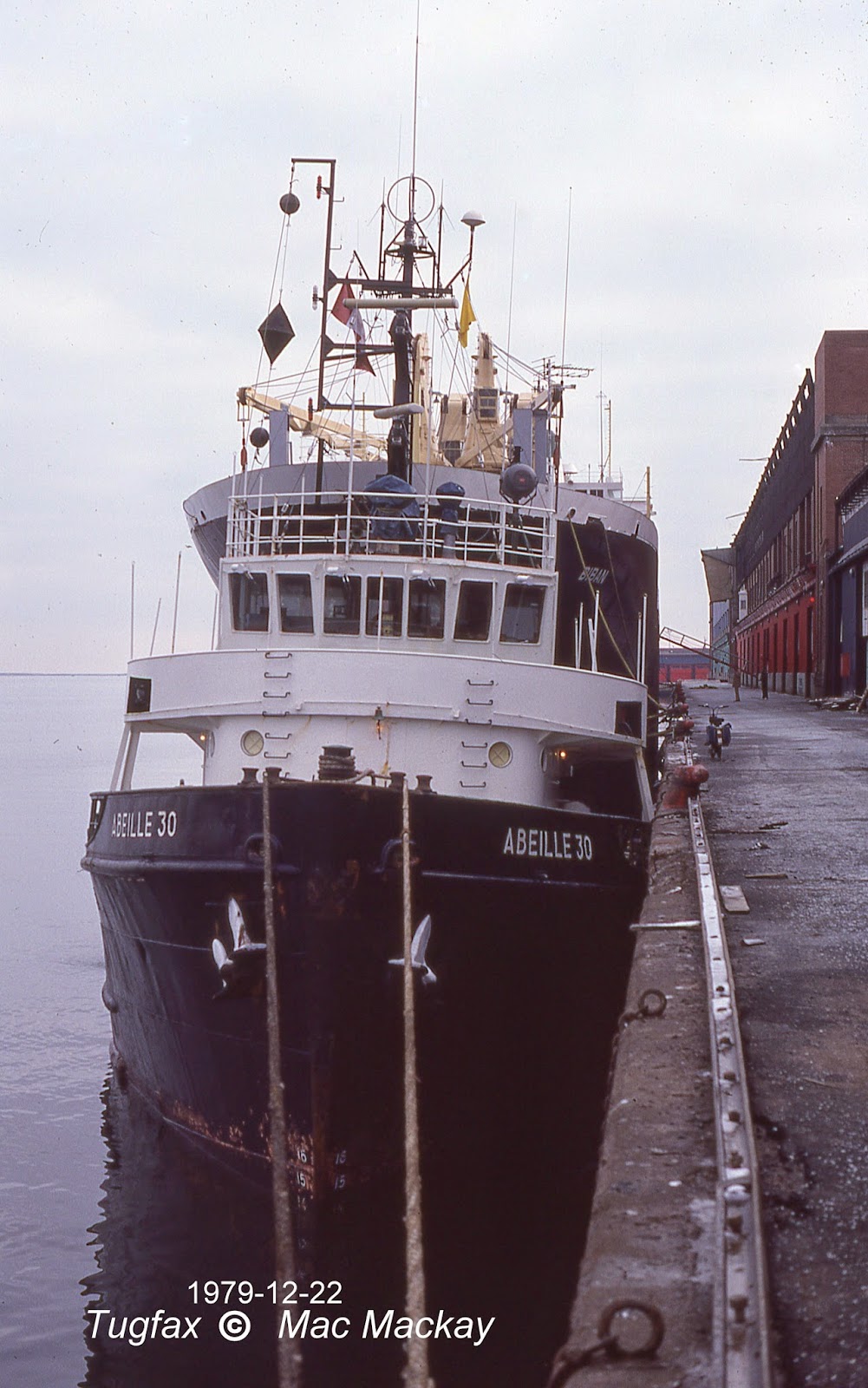 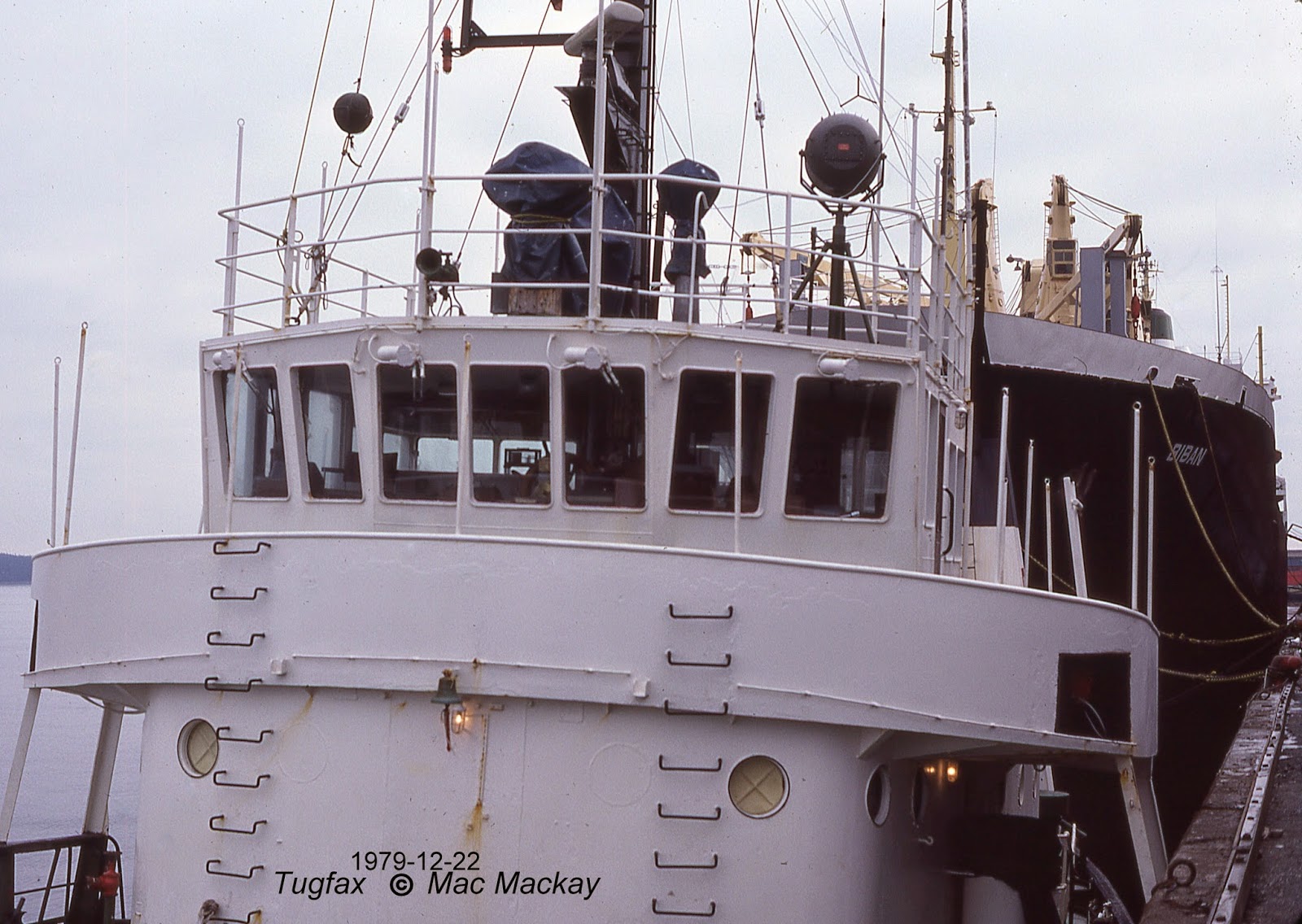 A new wheelhouse was added onto the old superstructure in 1972. 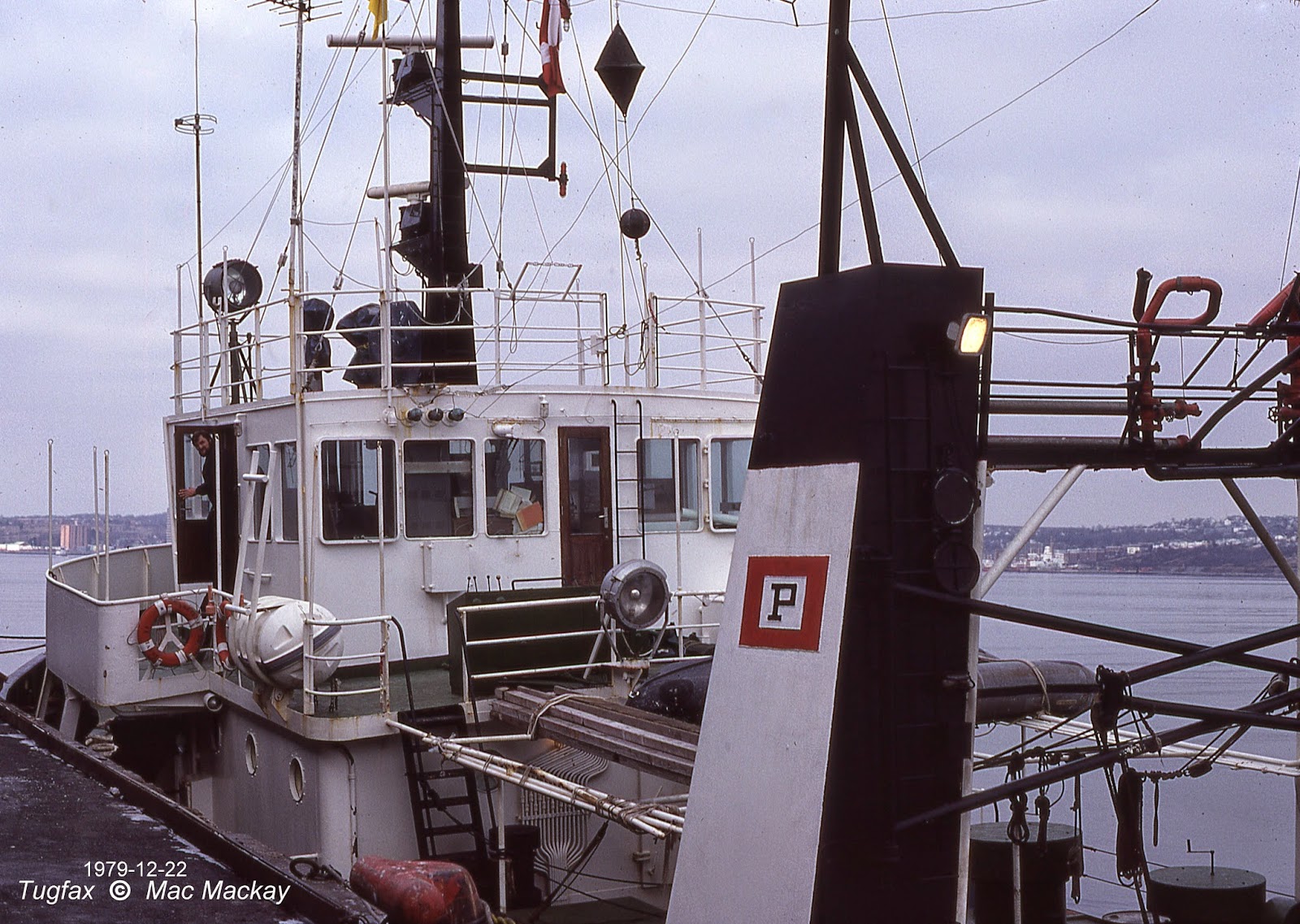 The PROGEMAR device on the new twin uptakes which replaced the old single funnel. 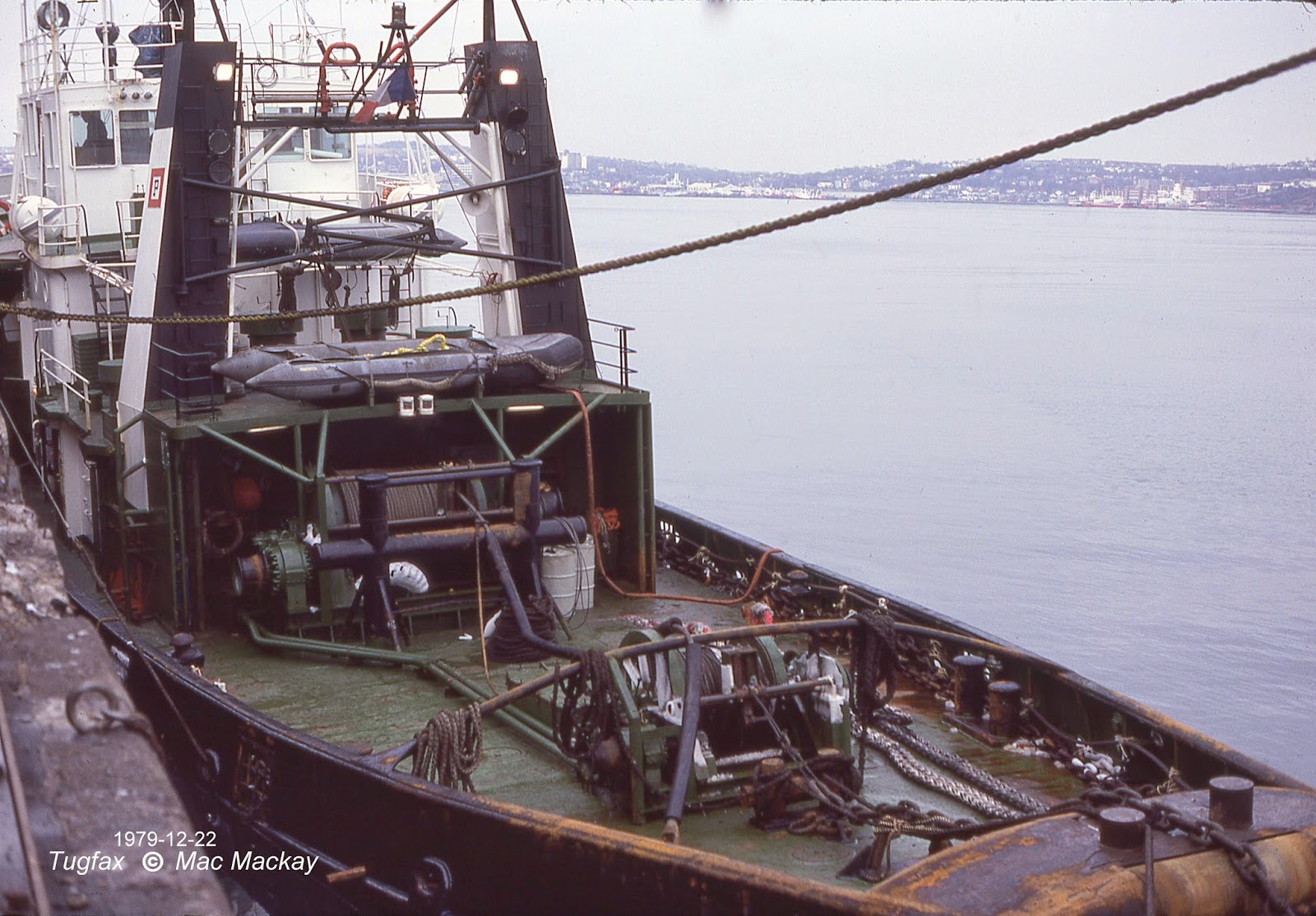 The bridge has a good view aft to the towing gear.

In 1983 the tug was sold to the Biscay Towing Co and was renamed Biscay 30 under the Panamanian flag. On January 14, 1985 it sank in position 29.07.54N x 89.125.42W (near the mouth of the Mississippi River delta) when it was overrun by its tow, the 22,391 grt bulker Master Petros. One crewman died in the incident. Later raised and moved to Venice, LA it was sold as lies to New Orleans breakers who commenced work in October of 1985. 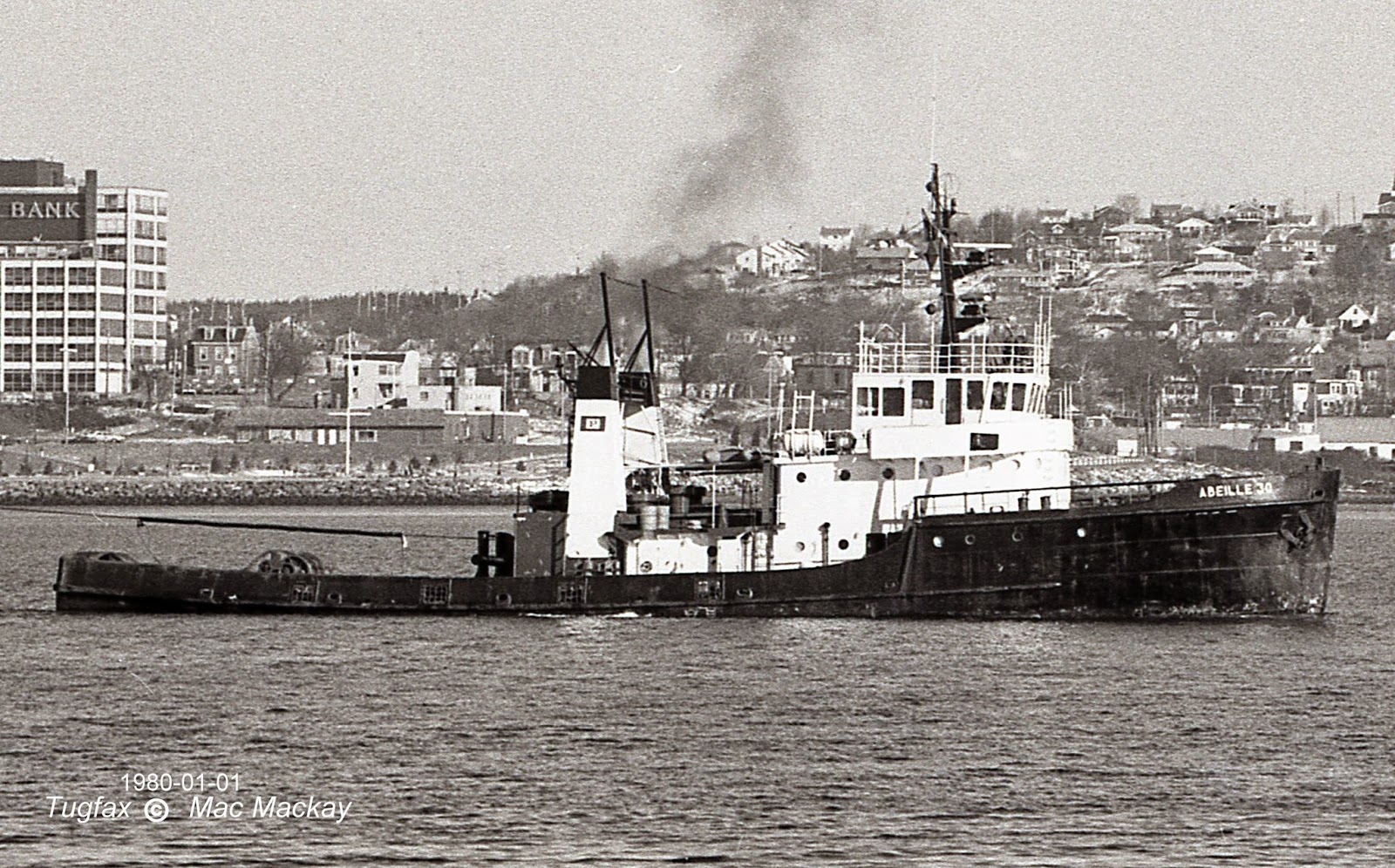 * Footnote: The bee, a symbol of industry, was also used by the emperor Napoleon as his personal symbol, thus is it had more than ordinary importance to a French company. Perhaps coincidentally the Davie Shipyard of Quebec built and operated a tug named Busy Bee from 1919 to 1959. It continued in service as a tug until 1975 when it was converted to a research vessel, Exploreur II, then a tour boat, ending up sold to the Dominican Republic in 1986.
Posted by Mac at 9:10 AM