A long serving member of the Atlantic Towing Ltd fleet has been scrapped during the past year. Atlantic Teak was acquired in 1979 in Singapore, where it had been built in 1976 as Essar. A twin screw vessel of 2300 bhp and 28 tonne bollard pull it was equipped with a huge towing winch. 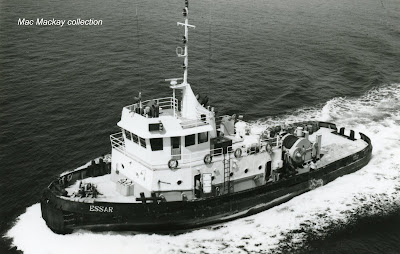 The winch was put to good use when it towed a barge from Singapore to Saint John where the tug was renamed Irving Teak. It was put to work towing Irving Oil barges and traveled throughout the Atlantic region delivering fuel. 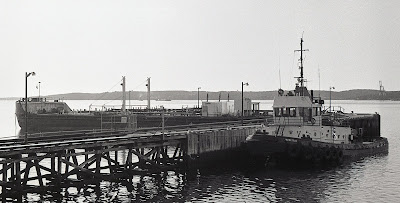 Tied up at the old Irving Oil depot in Woodside, with the barge Irving Seal .
(Very far off in the background is Irving Maple towing Irving Sealion.) 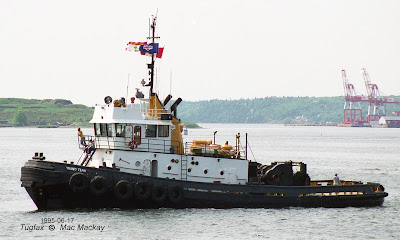 It became Atlantic Teak in 1995 when the entire fleet was renamed. The tug traveled widely towing cargo barges and sometimes did ship berthing work in Saint John, NB, most recently in Belledune, NB. It also worked summers ferrying supplies to Rankin Inlet from ships anchored in Hudson Bay or from Churchill. 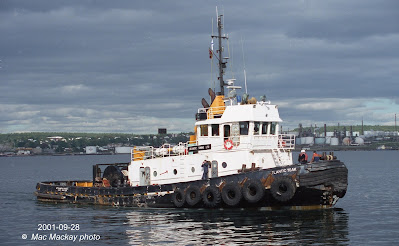 I often wonder what the engineer was taking a picture of - maybe me?

As Canadian tug fleets are disposing of older craft, they must be in the market for replacement vessels. With only one Canadian shipbuilder interested in building tugs (Groupe Océan's Industrie Ocean yard) it seems likely that competitors will be making acquisitions abroad.

At least two companies have already done so - Dominion Diving and Picton Terminals. Watch this blog over the coming weeks when their tugs are delivered.