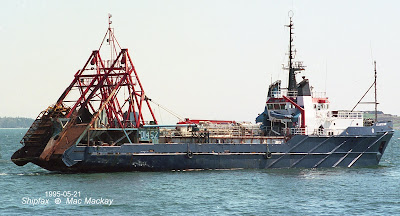 In May 1995 the Atlantic Surf was hauled out at Dartmouth Marine Slips for refit.

Built back in 1974 as Maersk Tracker by Aukra Bruk AS shipyard in Aukra, Norway, it worked for Maersk in Europe until was acquired by the Nova Scotia Clam Co Ltd in 1988 It was then fitted with dredging gear to harvest surf clams. The vessel was registered in Port Hawksbury and renamed Tracker I then Scotian Surf then Atlantic Surf all in 1988.

In 1992 owners became Grand Bank Seafoods Inc and in 1996 it was renamed Atlantic Surf I.

The ship was sold to Glaciar Pesquera SA of Argentina in 2004, and I have no record of its activities since then. In 2018 it was sold to Parana Logistica SA  and sometime thereafter, possibly as late as 2019,  the fishing gear was removed and it was renamed Atlantic Dama. It is now reported to be back in the tug and salvage business.